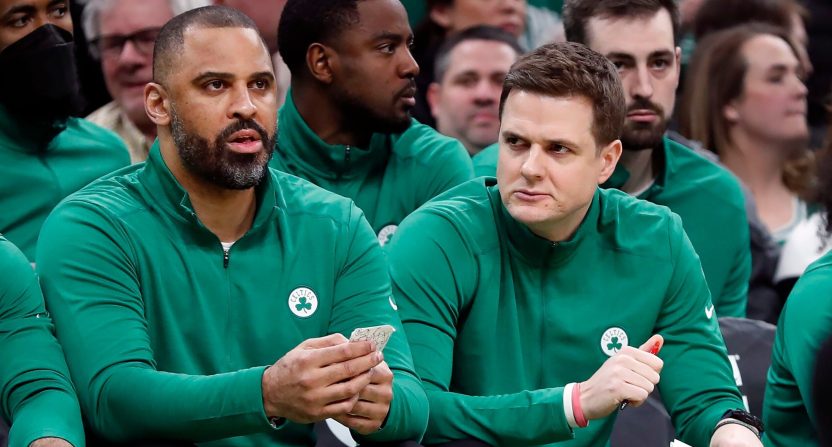 The Boston Celtics came up just short of an NBA championship this past season, losing to the Golden State Warriors in the NBA Finals in six games.

While this obviously wasn’t the outcome that they were hoping for, it was still an extremely impressive run from the Celtics.

They will likely be back at some point considering the Celtics extremely talented young core of Jayson Tatum and Jaylen Brown likely haven’t even hit their prime yet.

A big part of the team’s success was the impressive coaching from Ime Udoka in his first year as head coach of the team.

However, Udoka will likely have to lead the Celtics next year without one of his top young assistant coaches.

Reports have emerged that the Utah Jazz are “closing in” on Celtics assistant coach Will Hardy as the team’s next head coach.

Boston Celtics assistant Will Hardy is closing in on deal to become the next head coach of the Utah Jazz, sources tell @TheAthletic @Stadium.

Former Jazz head coach Quinn Snyder resigned from his role as head coach earlier this month, which shocked many around the organization.

This fit makes a ton of sense for the Jazz, as their CEO Danny Ainge previously came from the Celtics organization and reportedly sees Hardy as a frontrunner for his role on Udoka’s staff.

Hardy finished his first year as a Boston Celtics assistant last year, and was previously under San Antonio Spurs legendary coach Gregg Popovich as an assistant for five years.

It seemed like only a matter of time until Hardy became a head coach in the NBA, interviewing for several head coaching positions last offseason before ultimately deciding to join Udoka’s staff in Boston.

If Hardy is the man to replace Snyder as Utah’s next head coach, he will have his hands full in taking them to the next level.

The Jazz are certainly a good team, but appear to have reached their peak without some significant roster changes moving forward,

Despite making the playoffs each of the last six seasons, they have not made it out of the second round of the playoffs during that timeframe.

The Gregg Popovich coaching tree has produced some great NBA coaches, so it is certainly possible that Hardy could be the guy to push the Jazz over the hump in the Western Conference.