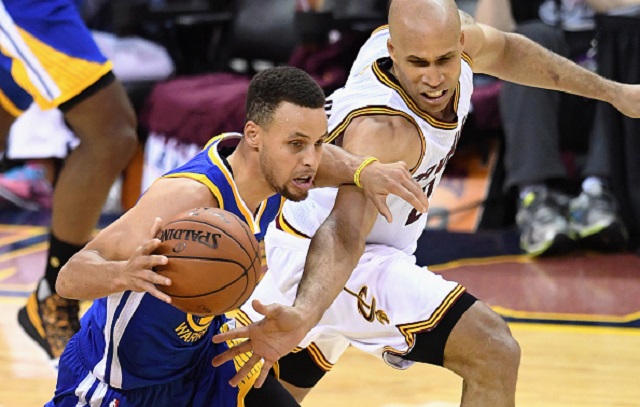 The Golden State Warriors play good defense, they shoot 3-pointers at a historic clip, and they have possibly the best bench in the history of basketball.

All of those things were reasons for them winning 67 games last year and 73 this year, which is pretty impressive.

But when the story of this team is written, and I believe that will be at about 11:45 EDT on Monday night, the thing that will have won them two championships is a completely different skill than those listed above. Given enough time, the Warriors will figure out what must be done to win, and seven games is always enough time.

Down 2-1 against Memphis last year, getting knocked around the court by the bigger, tougher Grizzlies, Golden State figured out that they didn’t need to guard Tony Allen. The result? Three straight wins.

Down 2-1 against Cleveland in last year’s Finals, the Warriors figured out that they needed to start Andre Iguodala to create matchup problems for the Cavs on both ends of the floor. The result? Three straight wins and the franchise’s first championship.

This year, down 3-1 in the Western Conference Finals, they figured out how to get better shots against Oklahoma City’s long and quick defense. On the other end, the Warriors increased their defensive pressure on Kevin Durant and Russell Westbrook, figuring that the two Thunder stars would regress to their ball-dominating ways when the chips were down. The result? Three straight wins and a second straight trip to the Finals.

In Game 4, the Warriors didn’t figure out anything about the Cavs they didn’t already know. What they learned was what was going to be called a foul, and what was not. This was certainly not the case in Game 3, as the Warriors found themselves getting manhandled on one end and being called for touch fouls on the other.

In the second half, the Warriors were much more physical with LeBron James and Kyrie Irving, but like the Thunder stars, those two didn’t trust their teammates enough to share the ball down the stretch. The Cavs went seven minutes without a field goal in the fourth, and saw a two-point deficit entering the quarter balloon to 10 when Steph Curry hit a trademark dagger 3 with 3:22 to go.

It was ironic, for while Curry and Klay Thompson did find their 3-point strokes tonight, it was again the complimentary players who made important contributions for the Warriors. Harrison Barnes scored the team’s first eight points, and added a huge 3-pointer that marked the end of the Warriors’ comeback surge and the beginning of their “holding the lead” phase. Anderson Varejao, who played 90 inspired seconds against the Thunder in Game 6, had a similar stint in this game. He had offensive rebounds, drew a foul, and basically forced the Cavs to take Kevin Love out of the game. Shaun Livingston and Andre Iguodala also hit several big shots, and played great defense.

The conventional wisdom in the NBA is that role players and bench guys don’t play well on the road. Well, in Game 4, the road team got contributions up and down the roster, and the stars for the home team played the entire second half.

Steve Kerr shocked even the Warriors’ most careful observers in the first quarter when he brought James Michael McAdoo off the bench. McAdoo had played only 15 playoff minutes before this game, but Kerr wanted some length with athleticism, and with Festus Ezeli nursing an injury, he gave McAdoo the nod. As it turned out, McAdoo had as much trouble keeping Tristan Thompson off the offensive boards as anyone else, but the fact that Kerr was willing to trust him with important minutes in the Finals sends a great message to his team.

After Game 1, when the Warriors bench outscored Cleveland’s 46-10, everybody was talking about the depth. After Game 4, when Steph Curry scored 38 points and the team hit an NBA Finals record 17 3-pointers, the bench was harder to find in the coverage. But beyond the shooting stats that drove the headlines after Game 1, the Warriors stretched a two-point lead in this game to a four-point lead over the first five minutes of the fourth quarter with Steph Curry on the bench. Then Curry came in, and scored 14 points over the last seven minutes, including the aforementioned dagger 3. That’s depth, and that’s what this team does to people.

Oh, and given enough time, they figure it out, and seven games is always enough time.

I remember when the Warriors lost their second game under Steve Kerr. Golden State had won its first five games despite averaging 21 turnovers per game. Then they lost to Phoenix, committing 26 turnovers — including 10 by Curry. Finally, they lost to San Antonio, Kerr’s old team, committing 19 turnovers to the Spurs’ eight.

Kerr came to the podium after the game with a big grin on his face. “Maybe now they’ll listen to me,” he said. “It’s hard to get their attention about turnovers when they’re winning all the games.”

This team needs to get punched in the mouth once in a while. They’ve lost 15 games, and 14 times they won the next one. Now the Cleveland Cavaliers need to beat them three straight times.