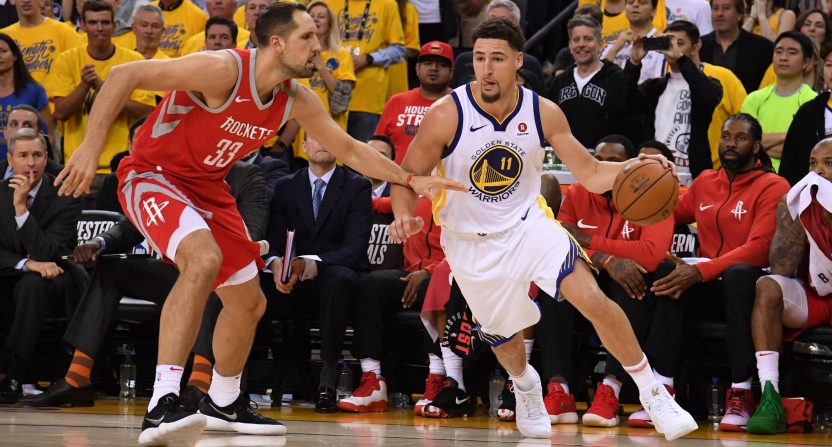 The Golden State Warriors evened up the Western Conference Finals series with a 115-86 victory over the Houston Rockets in Game 6 on Saturday night at Oracle Arena. Game 7 now heads back to Houston, but Chris Paul is reportedly considered unlikely to play. The Rockets’ star point guard suffered a right hamstring injury late in Game 5 that kept him out of Game 6.

And it seems the sports betting world is pretty convinced Paul won’t play in Monday night’s Game 7 (or won’t be nearly as effective if he does).

Las Vegas sportsbooks have the Warriors as a 5 to 5.5-point favorite vs the Rockets in Game 7 .

And again, the game is in Houston at the Toyota Center, where the Rockets have gone 2-1 in the series. So the Warriors being up to 5.5-point road favorites is pretty eye-opening, but it also speaks to two things:

1. The value of Chris Paul, of course

The Comeback’s Alex Putterman put it well in his article from Friday titled, “The Rockets’ hopes of finishing off the Warriors could rest on Chris Paul’s hamstring”:

The biggest difference between [the 2014-15 Rockets] and this year’s version, which beat Golden State on Thursday night to pull within one game of an NBA Finals berth, is the presence of Chris Paul, one of the greatest point guards of all-time and still a force at age 33. Paul, in his first season in Houston, has been the wingman Harden has needed for years, a second ball-handler and facilitator for a potent offense. He has quite simply turned a good team into a great one.

The Rockets’ juggernaut offense isn’t a juggernaut offense without the nine-time All-Star point guard. Paul essentially gives the Rockets two point guards in himself and James Harden, and allows Harden so much more freedom and spacing to be an elite scorer. Now, Harden will have to do a lot more of that creating himself, and with the full attention/gameplan of the Warriors’ defense.

In Game 6, the Rockets scored just 86 points, and only 25 points in the second half (!). Harden (32) and Eric Gordon (19) combined to score 51 of those 86 points. Houston will need someone else to step up big in the scoring department on Monday, and they’ll need a remarkable defensive effort.

2. The Warriors have been there and done that in these moments

The Warriors are the defending champs and have been to the Finals three straight years, with two titles. They’ve played in these games time and time again.

This Houston group hasn’t been to the Finals, and they haven’t been to a Game 7 in the Conference Finals (the Warriors beat the Thunder in Game 7 of the WCF two years ago, for example).

This experience has to count for something in such a high-pressure environment, and that’s putting aside that they may just be the better team anyway, especially if Paul is out.

If Paul is cleared to play, it will be interesting to see how much the line changes, but it would still be hard to bet against this Golden State core.

UPDATE: Chris Paul is officially out, and the Warriors are now 6.5-point favorites according to Bovada.

Breaking: Chris Paul will not play in Game 7, per Mike D'Antoni. pic.twitter.com/kgBlqU7ETJ