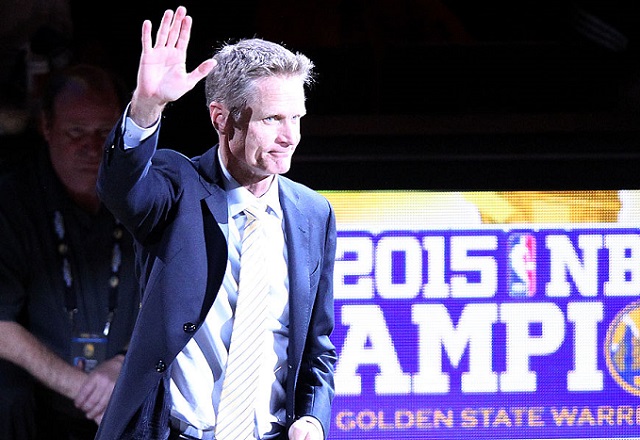 The Golden State Warriors’ 24-1 start has come without its real leader on the sidelines, as head coach Steve Kerr has spent most of the season recovering from complications from two offseason back surgeries.

Kerr’s condition has left him incapable of the daily grind that coaching can require, especially while requiring a lot of physical movement. However, according to an ESPN’s Marc Stein, the coach is expected to test out his back and see if he can return to full-time duty at the helm of his nearly flawless team, which is biggest story in the NBA and arguably all of sports right now.

“Warriors general manager Bob Myers, while stressing that there remains no timetable for a return to game coaching for Kerr in the wake of complications stemming from two offseason back surgeries, told ESPN on Tuesday that Kerr plans to be more vocal and active on the practice floor over the next two weeks to ‘test’ his readiness for a full-fledged return to the job.”

While it isn’t his back that is the main issue anymore, Kerr has suffered from massive headaches and other untold symptoms since his first surgery, which caused leakage of spinal fluid.

It’s always been Kerr’s hope to return full-time to coaching this season, but it appears his health will dictate exactly when that happens.

Kerr hasn’t exactly been a ghost during this near-historic run for the Warriors, choosing his spots wisely to inject his thoughts and coaching to the team. He’s also been a physical presence at most home games this season and an active part of the locker room when he can be.

Having been a veteran of the game on the court and gone through the long NBA season as a coach a time or two as well, Kerr knows the full commitment his job requires and that makes all the difference in this situation.

“I know what the grind’s about. I know my body,” Kerr said to reporters. “And this will be a good couple of weeks being at home, really being engaged at practice. I’ll have a good feel over the next couple weeks.

“It was harder to tell when the team’s on the road and you’re not part of it. But when you’re there every day now and practicing, you just get a better sense of the energy and dealing with the symptoms.”

The Warriors’ 24-1 start came without Kerr on the sideline; what could happen with him? Most NBA teams and opposing fans are likely to shudder at the thought of the defending champions playing even better once they return to full strength with their coach on the sideline.