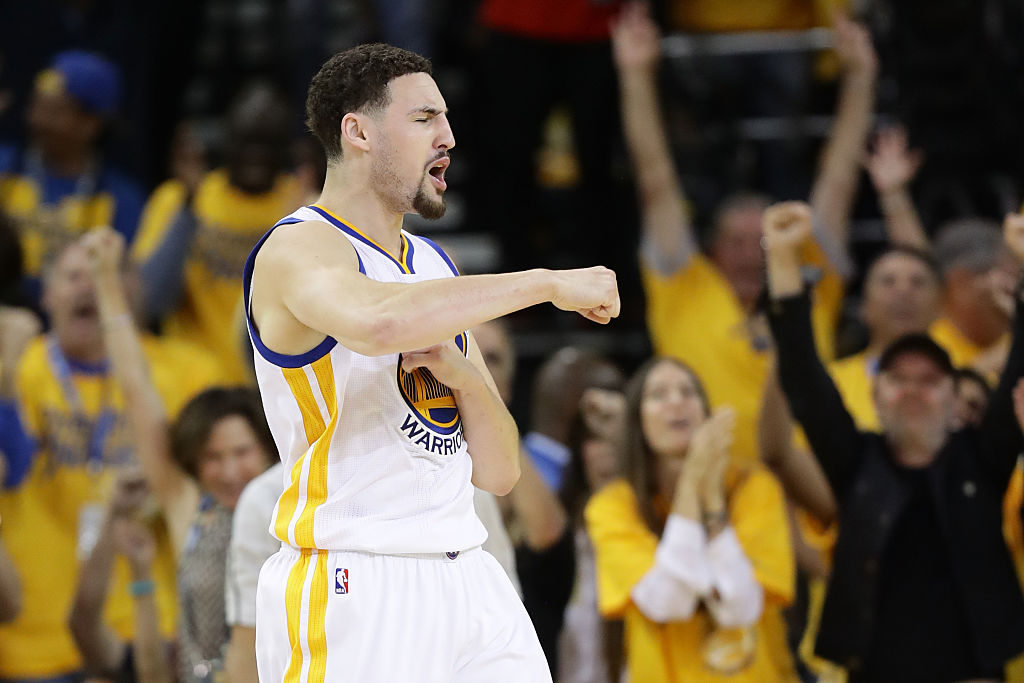 The Golden State Warriors are back. I don’t mean back in the NBA Finals, although that is also true. I mean back on the planet.

They had obviously been abducted, along with the Oklahoma City Thunder, and replaced with lookalike human forms that aliens thought would pass satisfactorily while they conducted experiments on the real players. For three days last week, which just happened to encompass Games 3 and 4 of the NBA Western Conference Finals, the replacement basketball players showed us that the aliens got a little confused.

The Oklahoma City Thunder played with precision, shared the ball with enthusiasm, played great defense, and shot 3-pointers like crazy. The Golden State Warriors lost composure when they fell behind, forced bad shots early in the shot clock, threw passes that were repeatedly stolen by the Thunder, and played indifferent defense.

Things were so crazy that the pretend Thunder scored 70 points in the first halves of Games 3 and 4!

The aliens saw this. They realized that if the course of events continued on that same trajectory, their experiment would be discovered and ultimately thwarted. They reluctantly (I’m sure) returned the actual players for Game 5 last Thursday night in Oakland.

Game 7 was the second great basketball game in this series. Much like Game 6, it ended with the result we expected (the Warriors winning), but took a route nobody foresaw. The defending champions had to win three straight games to vanquish a team that had won 18 fewer games in the regular season. That scenario was not on anybody’s radar when the West Finals began.

How did the Warriors — restored to their normal bodies — complete this comeback? They did it with their usual mix of devastating 3-point shooting, contributions from the bench, and blue-collar defense and rebounding.

Two historical NBA rarities were in play Monday night, and only one of them would come true: Either a team would complete a comeback from a 3-1 playoff deficit (for the 10th time in 234 chances), or a team would lose a Game 7 on its home floor (for the 25th time in 125 chances).

We learned, I think, that once you get to Game 7, the home floor is more important than the fact that a team is trying to complete a 3-1 comeback. I don’t think Golden State would have pulled off this win in Oklahoma City.

The Warriors fell behind by double digits in the second quarter, and if they had been at Chesapeake Energy Arena, the place would have come apart. That would have allowed the Thunder’s supporting cast to be more comfortable, which is how things played out in Games 3 and 4. (Instructively, in Game 6, OKC never got the fat early lead it built in Games 3 and 4, which enabled Golden State to conserve energy for the fourth quarter. That’s the essential difference between Game 6 and, on the other hand, Games 3 and 4 for the Warriors.)

If you’re a star player, you can take a lot of shots knowing that you’re not coming out of the game if you miss. If you’re a “role” player (the term we assign to non-star players), you know that any missed shot in a close playoff game could land you on the bench. That banishment could last to the end of the game or a series. It’s much harder to take and make shots in that circumstance. It’s a little easier if you have a big lead and are at home. Monday night, the Thunder had a lead, but they weren’t at home, and weren’t able to build on the lead as they did earlier in the series.

I believe that if this series had the 2-3-2 format which was used from 1985 through 2013 in the Finals, the Thunder would have won the series. If Game 5 had been in their building, the Warriors wouldn’t have had the luxury of the home crowd. It’s hard to say for sure, of course, but returning to Oakland for Game 5 was a big part of the Warriors’ return to form. 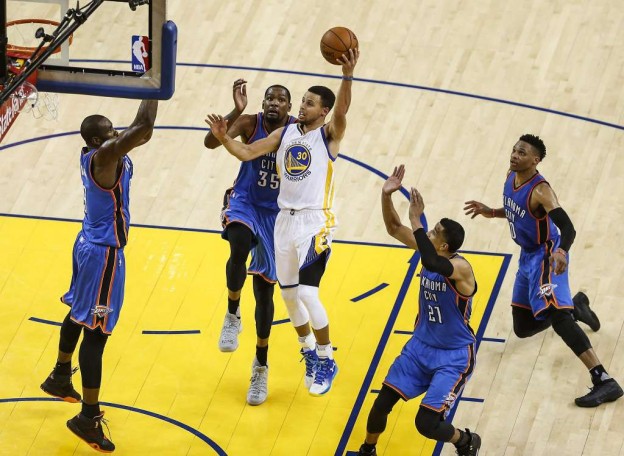 The Thunder deserve a great deal of credit, I think, for not letting go of the rope in this game. They had lost a 3-1 series lead, were playing on the road, and wouldn’t have shocked anyone if they had been blown out. Instead, they built a 13-point lead in the second quarter. The Warriors trimmed that lead to 48-42 at the half, which was significant.

The first few minutes of the third quarter were excruciating for fans of both teams as the Thunder missed several open looks, but the Warriors couldn’t score either. It was 50-42 with 9:19 to go in the quarter when Curry caught the Thunder in a switch and drained a 3-pointer. Oklahoma City scored on two straight trips, but after Curry’s make snapped a cold spell, the Warriors began to bury threes with regularity. It’s a depressing reality to absorb: The Thunder scored back-to-back baskets, yet lost five points of its lead because the Warriors were trading threes for twos. The 50-42 margin became 54-51, and the 13-point second-quarter lead evaporated into the mists of history.

By the time the Thunder hit another basket following the Warriors’ flurry of threes, they were trailing. The Warriors had hit five of six three-point shots in a short span of time, their forte throughout their season of record-setting achievements. The Dubs didn’t attempt a 2-pointer during a 15-6 run which gave them a 57-54 lead. Oklahoma City’s run-stopping basket made the score 57-56, but the Thunder never regained the lead in Game 7, despite Kevin Durant’s foremost efforts.

Why did OKC never retake the lead? The Warriors bench took over, free from the clutches of the experimenting aliens. 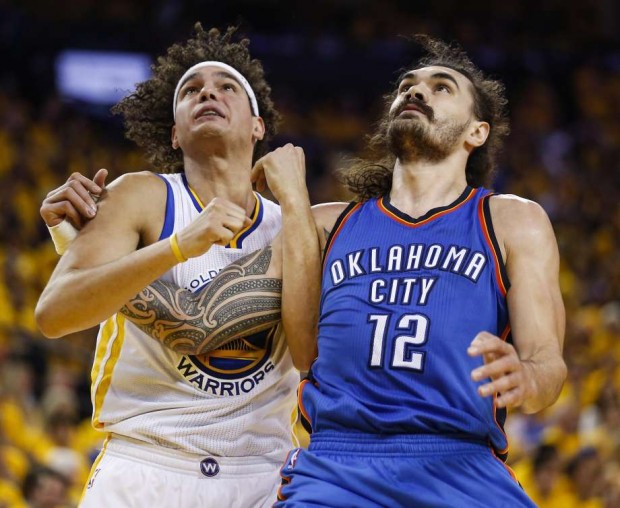 Anderson Varejao played for 1:51 of clock time and actually contributed. (Yes, it’s true.) He made two key passes, drew a charge, and made a crossover drive to the basket for a layup. Shaun Livingston — a big part of the Portland series, but invisible in this one — scored five points in a row, including a drive and dunk that ignited the crowd. He also blocked a shot from Russell Westbrook that led to a layup from Leandro Barbosa.

When the dust cleared on the quarter, the Thunder had managed just 12 points, and gave up 29. This was the kind of quarter they had been on the right side of in Games 3 and 4. At the end of the third, they trailed by 11 points, on the road, against a defending champion which finally had everything going.

Yet Oklahoma City didn’t quit. They cut the lead twice to four points two different times in the fourth quarter, but couldn’t get any closer. Each time, the Warriors got three points from Stephen Curry, one on a shot, the other on a foul outside the 3-point line with under 1:40 to go. Golden State executed, played defense, got rebounds, and did all the little things that you have to do to preserve a lead in the playoffs.

Andre Iguodala, in Games 6 and 7, became the man who won the NBA Finals MVP with his defense against a superstar. Draymond Green, rattled for most of the series by the course of events and Steven Adams’s superb play in the post, looked like his dynamic, versatile, game-changing self in the fourth quarter, hitting a three and cutting to the basket to make the Warriors’ offense the force it was en route to 73 wins. Curry and Klay Thompson remained at the forefront of everything Golden State did, but so many different faces made so many of the hidden plays which — when stacked together — create a victory.

This is the Golden State team I saw for six and a half months, not in Games 3 and 4 when the aliens installed their replacements.

Many people will say Oklahoma City choked in this series, because the Thunder had a 3-1 lead and lost it. I disagree. The Warriors were the better team all season long, and they were the better team in Games 2, 5, 6 and 7. It sounds trite, but that’s why you play seven games.

Golden State might have taken the court in two games with replacement players (Game 1 was its own separate entity), but its best players showed up in four. The Warriors won their first home-court Game 7 in 40 years. The franchise’s previous Game 7 in Oakland, if you’re curious, also came in the Western Conference Finals. I was there, inside the building now known as Oracle Arena, for the 1976 showdown against the Phoenix Suns.

That day, one could legitimately say that Rick Barry — an iconic Warrior and the heart of the 1975 championship team — was also abducted by aliens. He didn’t get the ball, and didn’t make the imprint on the game every Warrior fan thought he would. Barry just wasn’t himself in the fourth quarter that day, and the Warriors lost to a team which had won 17 fewer regular season games.

Monday night, this Warrior team would not suffer an achingly similar fate. Golden State did not lose to a team which had won 18 fewer games from late October through mid-April. This team would not allow itself to play a body-snatched Game 7 at home. Such is the confidence and composure of the 2016 Warriors, who celebrated with Rick Barry at the victory podium: 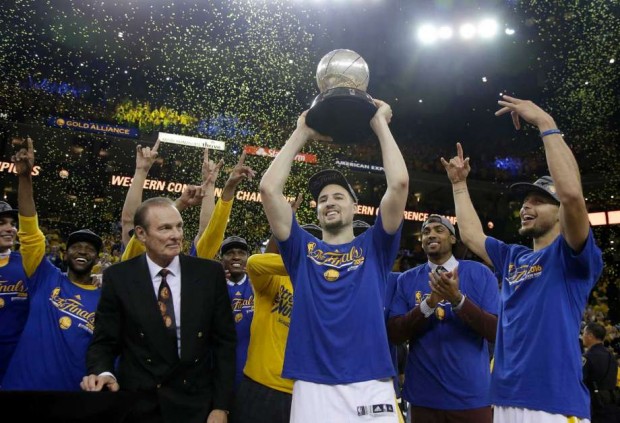 The 1976 Warriors were a great team, but they didn’t get a chance to repeat because a Game 7 at home dissolved into a mess of lost chemistry and composure.

The 2016 Warriors — against an opponent far stronger than the 1976 Phoenix Suns — wouldn’t allow their season to end in the one-game crapshoot a Game 7 always is.

We’ve seen the Warriors come through time and again this season whenever they needed to show something. Late in Game 6 and then in the second half on Monday night, they showed more than they ever have before.