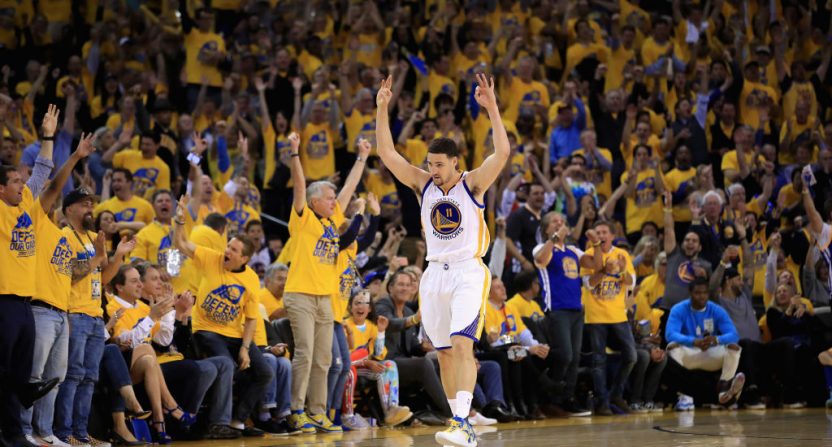 Ah yes, Barnes has to throw the competition aspect in there because the last thing he wants to do is make it seem like the Warriors know they will easily win in the second round and therefore are more concerned about nightlife.

He also probably doesn’t want to sound too excited about going to Olive Garden.

“You sit in your room,” Barnes said Sunday. “I think there’s an Olive Garden out there and then a Benihana. So, you’ll definitely be locked in [on the game] all the way. L.A., you have a few more dinner options. You’ve got the beach right there and the sun, and I got family. I think as players, we’re pulling to go to L.A.”

Then again, Andre Iguodala doesn’t seem to care about throwing competition into his nightlife quote.

“The problem with Utah is that you’re just sitting there and your mind is like dead because in L.A., you still got energy for the game,” Andre Iguodala tells ESPN. “Because you’re in L.A., you’re like, ‘Man, this is just the vibe in L.A.’ but in Utah, it can kind of lull you to sleep. And then you’ve slept too long or I’m bored out of my mind and now you got to try to pump yourself up for the game. You know you’re in the playoffs and you’re supposed to be pumped anyway, but the vibe is just like, ‘Man, let’s just get out of here.'”

Kevin Durant jumped in too and had a similar thought process as Iguodala.

“I’m sure it’s probably clubs, but I’ve never been to one in Utah,” Kevin Durant told ESPN. “It’s a few restaurants close to the hotel, but you’re not scattered out. L.A. is just bigger. That’s the only difference. But preparation wise, my approach is the same as in any other city.”

This is also something that was written about at length in ESPN’s The Undefeated piece entitled “How black Utah Jazz players have embraced Salt Lake City.”

Unsurprisingly, the Jazz players quoted in the article take Brown’s side and don’t agree, at least in the context of the piece, with the rest of the Warriors.

“Before I went, I knew nothing about Salt Lake City,” Paul Millsap, a second-round pick of the Jazz in 2006 who’s now with the Atlanta Hawks, said. “I didn’t even know where it was on a map. I remember getting out there and people greeting me. It was an amazing time.”

Then again, the type of entertainment former Jazz players referenced in the piece are a little different than what it seems like the Warriors are seeking.

“I brought chocolate to ‘White City.’ I put on concerts,” Byron Russell said. “I put on events. I had people saying, ‘Well, damn, Utah is not bad at all.’ It was about having fun while you were playing there and having a great atmosphere. We had a ball. Everyone was looking forward to the next one.”

Here are the types of nights the Warriors were looking for:

“The challenges in L.A. are obvious,” Iguodala said. “Before you know it, it’s two or three o’clock in the morning and you didn’t even realize it was that late because there’s so much to do. You can do whatever. It doesn’t even have to be anything that exerts energy as far as body movement, but mentally you can exert energy because you’re interacting with different people. You’re out, and then that could lead to trouble.”

Jazz wing Joe Ingles said he'll pay for a car if the entertainment-seeking Warriors want to go to Las Vegas between games.