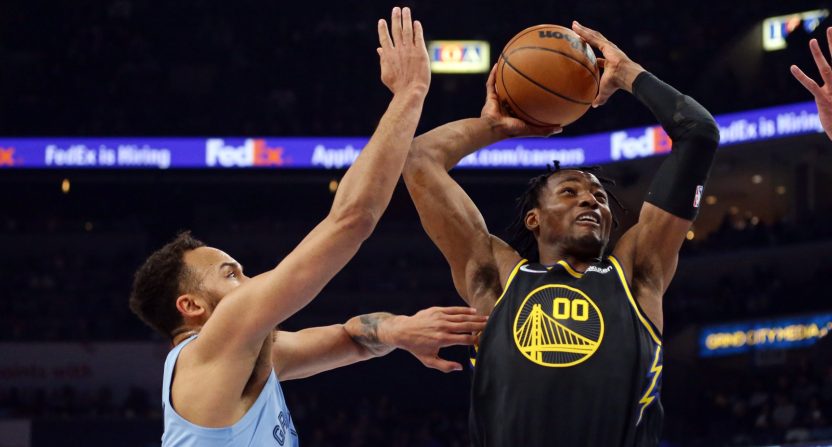 As soon as Game 3 of the series between the Golden State Warriors and Memphis Grizzlies got underway, Golden State rookie Jonathan Kuminga made NBA history.

With Gary Payton II sidelined, the Warriors had to change their starting lineup. They decided to replace Payton with Kuminga, who is 19 years, 213 days old.

With that, Kuminga became the youngest starter in an NBA playoff game for at least 51 years.

Jonathan Kuminga is in the starting lineup for the Warriors tonight.

At 19 years, 213 days old, Kuminga is the youngest player to start a playoff game since starters were officially tracked in 1970-71. pic.twitter.com/MAK1JZBXTN

And it’s highly unlikely that anyone before the 1970-71 season was younger than Kuminga is now.

Before the 1990s, it was rare for players to leave college early to join the NBA. There were exceptions, like Magic Johnson in 1979, Isiah Thomas in 1981 and Michael Jordan in 1984. But Johnson and Thomas both played two years of college basketball, while Jordan played three. All three players were older than Kuminga is now when they played their first NBA games, let alone their first postseason games.

More recently, we’ve seen superstars like Kevin Garnett, Kobe Bryant and LeBron James enter the NBA straight out of high school. But Garnett was nearly 21 when he made his first postseason start in 1997, while James had already turned 21 by the 2006 playoffs. Bryant was younger than Kuminga when he made his playoff debut, as he hadn’t yet turned 19 by the 1997 postseason. But his first start in the playoffs didn’t come until 1999.

Don’t expect Kuminga’s record to be broken any time soon, either. While it’s not impossible, it does feel especially probable.