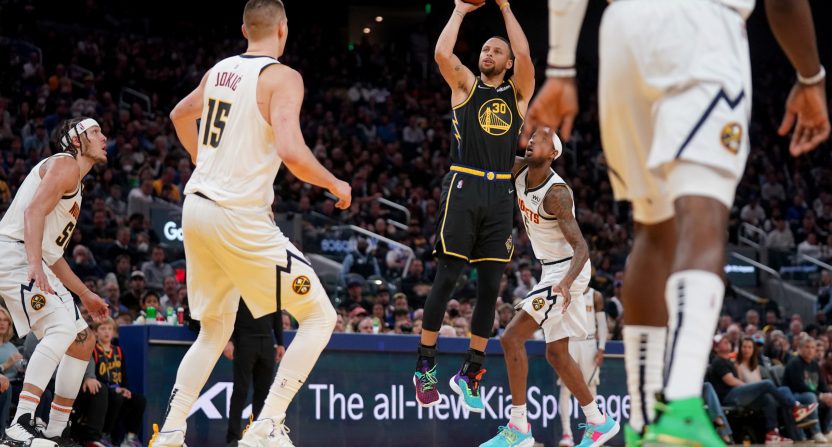 It wasn’t an easy game for them, but the Golden State Warriors did what they needed to do on Wednesday against the Denver Nuggets.

The Warriors definitively held serve at home in the first two games, winning them by 16 and 20 points, respectively. While the Nuggets won Game 4 to avoid a sweep, there was very little reason to think that they’d have much of a chance in Game 5 with the series returning to California. Denver bucked that narrative, though, taking a 78-70 lead into the fourth quarter. But Golden State dominated the fourth quarter 32-20 to win Game 5 102-98, closing out the series in the process.

Battled to the very end. pic.twitter.com/p2H7HMCez7

There were two different feelings in the NBA world regarding this result.

For the Warriors and their fans, winning the series brought on feelings of relief more than jubulation.

Down 3-0, the Nuggets showed some heart, like they have all season. And the Warriors needed to be pushed like that

I remain blown away by the fact that perhaps the most important shot of the Warriors’ season was hit by a guy who almost got cut before the season in favor of Avery Bradley. https://t.co/jojC86roca

Not the prettiest win for the Warriors, but really, really good for them to have to dig deep and grind out a playoff win

Some of the previously eliminated teams have been panned for their performances — but that wasn’t the case for Denver. While the Nuggets lost the series in five games, they earned a lot of respect from the performance, particularly given how short-handed they were.

Proud of this Nuggets team. Kept up with the Warriors in the second half of the series. Jokic vs the World and he did not disappoint. Can’t wait for this team to be fully healthy. pic.twitter.com/tXAeuck9pB

Extremely impressed with this Nuggets team and how they adjusted throughout the series. Michael Malone's teams consistently get better throughout series and were extremely prepared to guard all the Warriors' pet actions by the end.

Absolutely no shame in how this Nuggets season unfolded. Incredible to have avoided the play-in and get nearly 50 wins. Ran into a buzzsaw in a healthy Warriors roster (who will win the West with relative ease).

Can't wait for Murray and MPJ to be back next season

In particular, Denver’s star, Nikola Jokić was on the receiving end of a lot of praise for his performance in the losing effort.

Nikola Jokic did all he could vs. the Warriors:

The Warriors will face the winner of the Minnesota Timberwolves vs. Memphis Grizzlies series. That series will either begin on Sunday, May 1 or Tuesday, May 3, depending on how long it and other remaining series go.