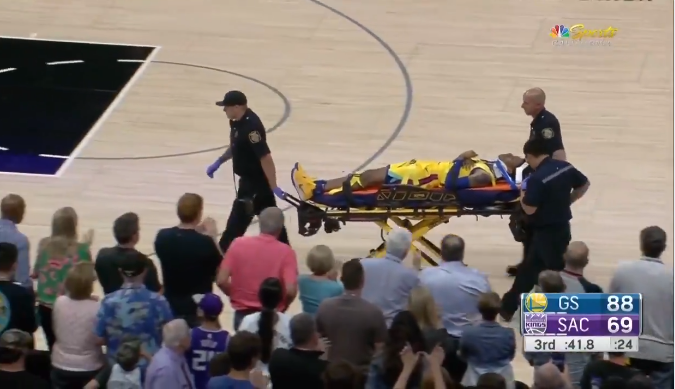 Golden State Warriors guard Patrick McCaw was taken off the court on a stretcher in the third quarter of Saturday night’s Warriors-Kings game in Sacramento, after he was undercut by Vince Carter after a drive to the basket and took a hard fall on his back. McCaw rolled around on the court and was clearly in serious pain, while Carter was emotional and in shock at the moment.

Initially, Warriors head coach Steve Kerr was clearly angry at Carter; you could even hear him say, “God dammit! God dammit! I’m not mad at you, I’m mad at Vince. He knows better.”

But Kerr would later walk over and console Carter while McCaw was being placed on the stretcher.

Kevin Durant comes over to talk to Vince Carter, who is still upset pic.twitter.com/2I8lcvCbxj

Before he shoots the flagrant foul free throws, Kevin Durant with a hug for Vince Carter, who appears distraught after the undercut foul.

Both teams gathered in prayer as McCaw was being stretchered off.

Both teams join in prayer after Patrick McCaw gets stretchered off the court pic.twitter.com/ayJP36PQo6

After 5+ minutes, Patrick McCaw finally stretchered off the floor. Both teams came together for a quick moment. pic.twitter.com/QeOSaaZhcf

McCaw was taken to the hospital and the players wanted to visit him after the game, but he’s going through testing.

The entire Warriors team planned to drop by the hospital tonight to visit Patrick McCaw, but they’ve just been told he’s still going through testing and they hope to catch up with him tomorrow.

Update: More from the postgame.

ESPN Sources: Golden State guard Patrick McCaw experienced numbness upon landing, but has since regained sensation in leg. A chest X-ray came back clear. He is awaiting results of CT Scan and will also undergo an MRI.