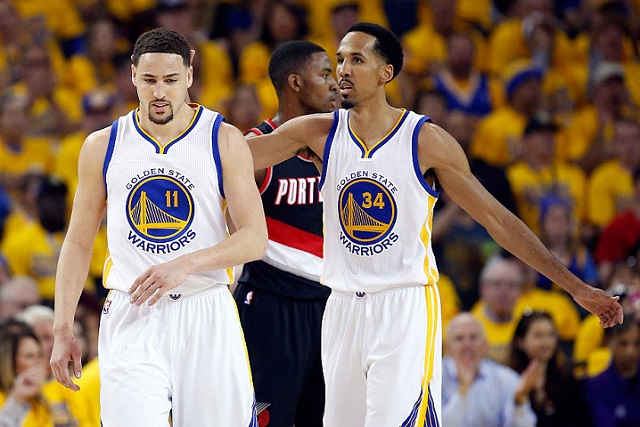 We knew the Golden State Warriors would be okay without Steph Curry. At least in the short term. But I think it’s fair to say few people expected this. It’s not just the wins; it’s the way they’ve been able to dominate the Houston Rockets and now the Portland Trail Blazers without the MVP on the floor.

Look at it this way: the Warriors were actually outscored by nearly four points per 100 possessions this season when Curry sat, per NBA.com. Again, that didn’t mean his absence would necessarily spell doom for Golden State. But, man, it was supposed to be harder than this. And, yes, we should at least wait for the Warriors to win a game in Portland before calling the series. But consider: they won Game 1 by 12 points and Game 2 by 11, and they have the highest point differential in the playoffs, despite Curry playing just 39 minutes over two games in the opening round.

There’s no one person, or reason, responsible for this lack of a drop-off. Klay Thompson has been fantastic and his ability to carry the scoring load, despite defenders now being able to center their focus on slowing him down, has been impressive. Draymond Green’s versatility and creativity continues to amaze. And of course there’s that stingy defense — a league-best 92.1 points surrendered per 100 possessions during the playoffs — which suffocated James Harden and is making life miserable for Damian Lillard.

But let’s not forget the man who’s taken Curry’s position in the starting lineup, or how incredible it is that here, at the age of 30 and in the year 2016, he’s become an integral piece on one of the NBA’s top teams.

If you’re even a casual NBA fan, you know the story of Shaun Livingston. But it’s worth retelling anyway. High school star out of Chicago, a 6-foot-7 point guard with eagle-like court vision and effortless style who turned down a scholarship offer from Duke to head to the NBA. He was drafted No. 4 overall by the Clippers in 2004 and for two-and-half-seasons justified the hype. He was a key cog on the 2006 Clippers team that won 46 games and made it to the second round of the playoffs.

“Our staff, we thought that he might be the best player on our team [by now],” then-Clippers coach Mike Dunleavy recalled to Grantland’s Jonathan Abrams in 2013. “He’s a great defensive player. He’s got a great IQ, his shooting was improving every day, and he was getting a little more of a post game. His whole game was coming around.”

We all remember what happened next. Not just an injury, but perhaps the most brutal and vicious one in professional sports history. If they want, Livingston and Joe Theisman can duke it out for the crown. Teammates talk about the horror of hearing Livingston scream and how his left knee looked like a pretzel. There were myriad tears and fractures. At one point, Livingston was told that his leg might need to be amputated.

He eventually recovered, but spent the next five years battling injury issues and bouncing around the league. There were stints in Miami, Oklahoma City, Washington, Charlotte, Milwaukee, Washington again and then Cleveland. He missed dozens of games over that span and could just never find his groove. There were flashes of the player he once was. But nothing more than that.

Then in 2013, Livingston arrived in Brooklyn and finally put together a full season. He played 76 games that year, started 54, and helped the Nets make it to the second round of the playoffs. That summer, he signed a three-year, $16 million deal with the Warriors and less than a year later, he was celebrating a title.

Livingston, it turned out, was a perfect fit for Steve Kerr’s schemes. He can’t shoot like Steph Curry — or, for that matter, any decent sniper — but his ability to run an offense and deliver pinpoint passes more than makes up for that.

Also, he’s a bully down on the post. Livingston hit 71 percent of his shots at the rim this season, per NBA.com, and his height and high release make his turnaround jumper nearly impossible to defend, especially for point guards. He requires a double on him, but when teams do, he uses his court vision to kickstart the Warriors’ offense. And let’s not forget how good he is on defense, where he’s able to hound opposing point guards with 6-foot-11 wingspan and switch onto big men when teams put him in the pick-and-roll.

For the majority of his time in Golden State, Livingston has been deployed sparingly. He’s been a weapon, but one only used when the team’s nuclear bomb needed a break. With Curry out, though, the Warriors have leaned heavily on Livingston and he’s has no problem holding up. Just look at these postseason numbers: 13 points on 52 percent shooting and five assists. More importantly: Golden State has been 20.5 points per 100 possessions better with him on the court, per NBA.com.

That’s not to say that the Warriors don’t need Steph Curry or that these trends will hold up as the competition improves. But it’s always fun to see a bit player step up when the games matter most. That just nine years ago, this bit player looked like he might never be able to run again makes what we’re seeing even more fun and makes Shaun Livingston the best story of the NBA Playoffs thus far.