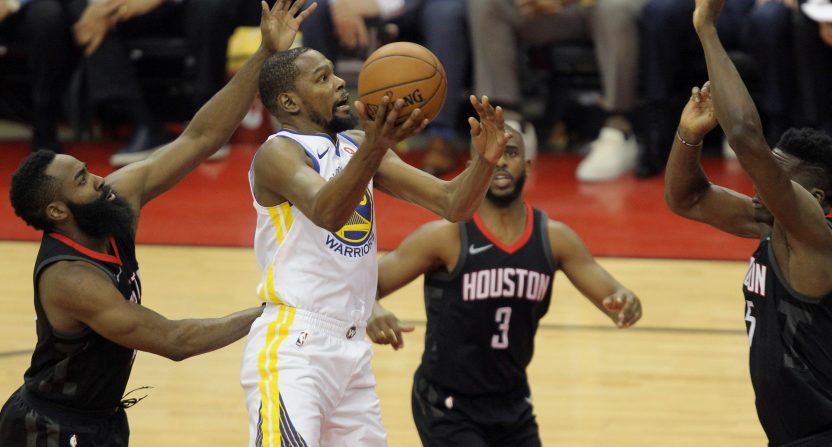 The Golden State Warriors made a big statement and greatly swung the odds in their favor with a 119-106 road victory to open their long-anticipated Western Conference Finals showdown with the Houston Rockets.

Kevin Durant led the way for the Warriors in Game 1 with 37 points (14-of 27 FG; 6-of-6 FT) and an array of highly difficult shots. Being nearly a 7’0″ footer with guard skills makes him borderline impossible to guard.

The Warriors are now 25-3 in the Playoffs with Kevin Durant. They've never had a series go even 6 games.

The Rockets were viewed as arguably the best team the Warriors have seen over this incredible four-year run, and the numbers backed that up. But the Rockets may not have been able to afford this home loss, and have now lost the home-court advantage they viewed as so crucial to obtain.

The Rockets won 65 games this year and their best player went off in Game 1 and they lost by double digits. Warriors ain't fair

The Rockets – a team specifically engineered to out-Warrior the Warriors – pushed like hell to win 65 games and get that top seed to secure home court advantage … and like that it’s gone.

Even if Houston wins Game 2 to even up the series, the best-of-five would give Golden State three home games (if necessary) at Oracle Arena and that’s going to provide an incredibly difficult challenge for the Rockets.