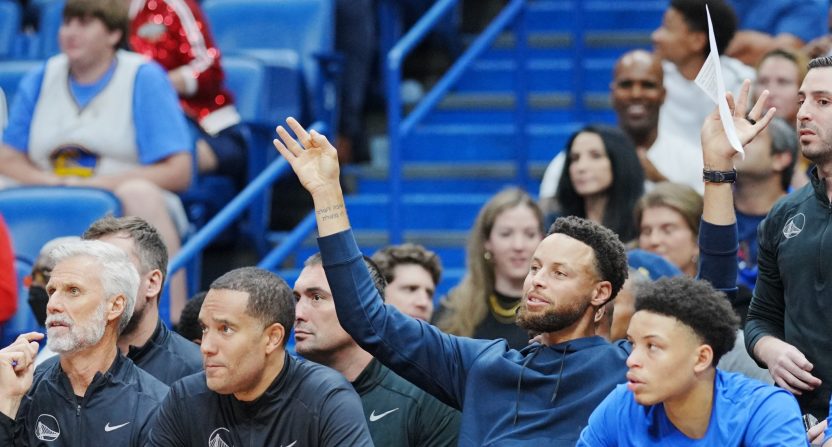 The Golden State Warriors had an uneven start through the first five games of the season, alternating between wins and losses to start 3-2. Things have evened out over the subsequent five games — just not in the way that the Warriors had hoped.

Golden State defeated the Miami Heat on October 27, the final home game before venturing out on a five-game road trip. That road trip came to an end on Friday night with a 114-105 loss to the New Orleans Pelicans. On its own, that loss wouldn’t be too much to worry about. The Pelicans are a good team and the Warriors rested Steph Curry, Klay Thompson, Draymond Green and Andrew Wiggins. Losses like that are to be expected.

Unfortunately for the Golden State, it was the team’s fifth loss in a row.

The Warriors went winless on a road trip against the Charlotte Hornets, Detroit Pistons, Heat, Orlando Magic and Pelicans. Those losses, along with the 134-105 loss to the Phoenix Suns earlier in the year, give Golden State an 0-6 road record.

That’s the first time the Warriors have experienced such futiliy away from home since a dark era in the franchise’s history. It also makes Golden State the first ever defending champion to struggle in such a way.

And even if Friday’s loss was predictable and actually brought some positives, the overall start to the season has been troubling for the Warriors. The NBA world was quick to note the struggles of the reigning champions thus far.

The Warriors are 3-7 after their first ten games of the season.

That's the fourth-worst record in the Western Conference. pic.twitter.com/3TgnRLWZIg

If the Warriors want to win some games in the short-term, Moody and Kuminga getting all of Wiseman's and JaMychal's minutes probably wouldn't hurt. Kerr is always thinking long-term, but 3-7 isn't OK in the west.

Useful night for the Warriors' young core. Five in double figures: Poole 20, Kuminga 18, Jerome 18, Lamb 16, Moody 14. But they faded late against the Pelicans. That completes an 0-5 road trip. Losses in Charlotte, Detroit, Miami, Orlando, New Orleans. The Warriors are 3-7.

Warriors gonna have the opposite of a happy flight home.

Warriors have more losses than the Lakers and Nets.@PointsBetUSA pic.twitter.com/31CQWpzS3Q

The good news for the Warriors is that 72 games remain on the schedule. There’s plenty of time for them to figure things out. But in a strong Western Conference, Golden State would be advised to that quickly.