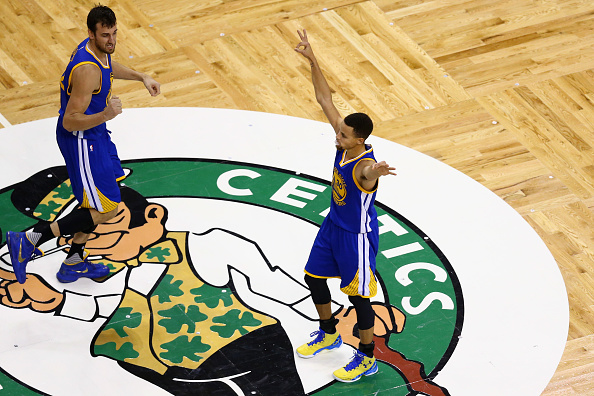 The Golden State Warriors headed into Friday’s game at Boston with a perfect 23-0 record, but the Celtics seemed like a challenging obstacle in their quest to stay unbeaten, with the likes of Jeff Van Gundy predicting the streak would end there. That obstacle got even higher with the news that star shooting guard Klay Thompson wouldn’t be available thanks to a sprained ankle he suffered Tuesday against Indiana.In the end, though, the Celtics gave the Warriors everything they could (in a game many Warriors fans in the Bay Area couldn’t watch initially thanks to DirecTV technical issues), but Golden State still pulled off a 124-119 double-overtime win to improve to 24-0.

Once the game tipped off, it was close as expected, and the Celtics managed to hang with the Warriors reasonably well, trailing by four at the half. Despite that, Boston analyst Tommy Heinsohn wasn’t thrilled with the refs (pretty standard for him):

i think the celtics announcers are mad pic.twitter.com/vdSJ2Qq9j5

The Warriors led 82-75 heading into the fourth quarter, but Boston managed to take the lead late in the frame with an impressive run. Then Steph Curry did Steph Curry things, though, hitting this amazing three-pointer from deep in the final minute to put Golden State back up 103-101:

With less than two seconds left, Boston might have been able to ice it, but Isaiah Thomas’ shot was blocked by Shaun Livingston:

The Warriors and Celtics each had further chances to win in regulation off set plays, but neither coach’s final play worked out. Golden State’s lob to Festus Ezeli didn’t work, and neither did the final shot from Boston’s Kelly Olynyk, leading to a rather understandable reaction from the crowd:

The first overtime saw some back-and-forth play, including Olynyk redeeming himself with a deep three-pointer:

Golden State was able to hang on for the 124-119 win and improve to 24-0, despite what the @BreakingNews account said:

.@BreakingNews is one of my top 10 must-follow Twitter accounts. They're right 99.99% of the time, but not this time pic.twitter.com/Y5OEWQibEB

A XXX-XXX loss? That sounds dirty…

The Warriors may have survived this one and kept the undefeated streak going, but how close this game was suggests there are plenty of battles ahead for them, though. Next up? Playing in less than 24 hours at Milwaukee. Tip-off’s at 8:30 p.m. Eastern Saturday. Hope they’re able to get some sleep on the flight…