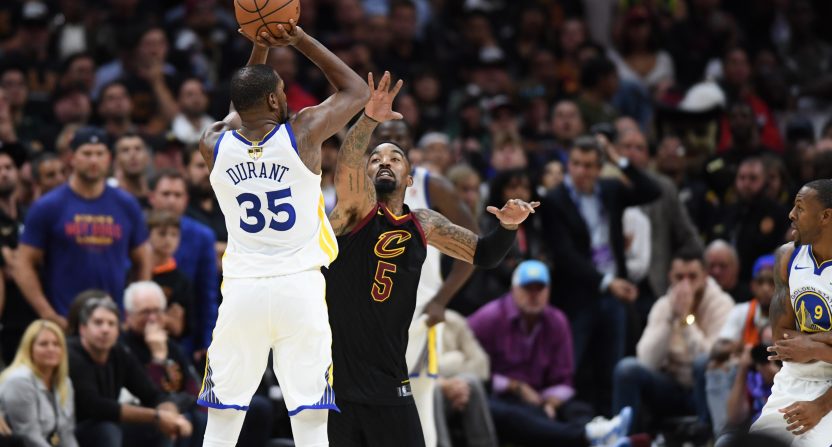 While Games 1 and 3 have at least been very competitive, it appears the NBA Finals are going to be as quick as we feared.

The Golden State Warriors took down the Cleveland Cavaliers 110-102 on Wednesday night in Cleveland to take a 3-0 lead in the series.

It’s pretty unbelievable that the Warriors were able to score 110 points when you consider that only one player scored over 11 points. That was Kevin Durant, who dropped 43 on a ridiculous 15-of-23 shooting from the field (and a nice 6-of-9 on threes). He also pulled down 13 rebounds and dished out seven assists.

And Durant hit this dagger three in the final 50 seconds:

Which looked quite a bit like the three he nailed in Game 3 last year:

Steph Curry had a miserable night shooting, with just 3-of-6 makes from the field and 1-of-10 from downtown. Klay Thompson was also off, with a 4-of-11 offering from the field. But, Durant was just that good, and the Warriors were excellent at the free throw line, making 17-of-19 shots at the charity stripe.

For the Cavs, LeBron James got a triple-double (33 points, 11 assists, and 10 rebounds), and Kevin Love scored 20 with 13 boards, but they continue to not get enough production from the rest of the team.

Can the Cavs actually get a win and send this series to a Game 5? Charles Barkley certainly doesn’t think so!

Charles Barkley on the Cavs' chances of not getting swept by the Warriors:https://t.co/G3nEM6T7l6

And he’s probably right. Game 3 was the game the Cavs were supposed to win… if they were going to get a win at all, of course. This was the opportunity to come out and feed off the energy of the crowd, and take care of a must-win game with the Warriors not feeling the same desperation.

The scary thing is the Warriors still haven’t played anywhere near what they’re capable of for two of these three games, and here they are up 3-0 in the series. While the Warriors surely wouldn’t mind winning in front of their home fans later in the series, look for them to come out with a purpose in Game 4 and try to secure their third title in four years.

Game 4 tips off at 9 PM ET on Friday night in Cleveland.