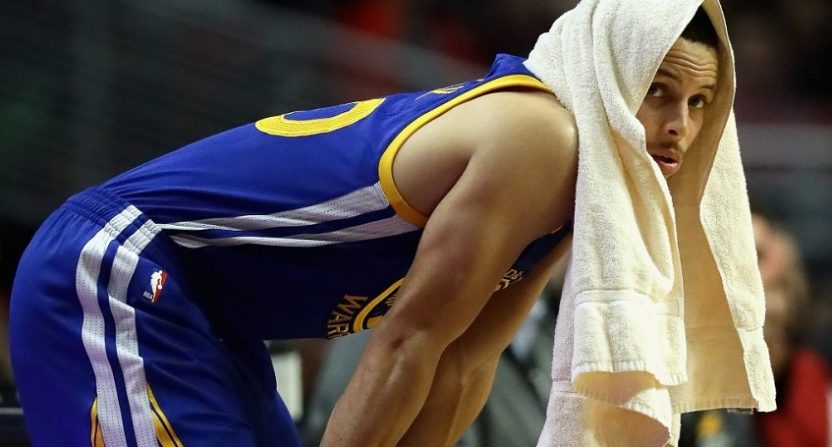 Kevin Durant’s decision to leave the Oklahoma City Thunder for the Golden State Warriors sent shockwaves across the NBA landscape this past summer. The Warriors instantly were transformed into a super-team and seemed like a shoo-in to be in the NBA Finals for the third straight year.

Of course, this was all speculation. But once the season started, the Warriors in short time showed that they were indeed championship contenders. Golden State picked up win after win, and soon had the best record in the league and the No. 1 seed in the West.

But right on the heels of the Warriors all season long has been the San Antonio Spurs.

Led by MVP candidate Kawhi Leonard, the Spurs have the second-best record in the NBA and are the No. 2 in the Western Conference. San Antonio has the best defense in the league and are a top-five offensive team. Yet while the Warriors and other teams like the Houston Rockets have been getting all of the hype in the West, the Spurs — as usual — have been flying under the radar.

In the past few weeks, however, the playoff situation at the top of the West started to shift.

Durant “suffered a Grade 2 MCL strain and tibial bone bruise” and his initial diagnosis was out for four weeks, when he will re-evaluated. Not having Durant is obviously a big loss for the Warriors, but Golden State has the ultimate safety net with Stephen Curry, Klay Thompson and Draymond Green. After all, these three in large part led the Warriors last season to a historic 73-9 season and Curry was the league’s first unanimous MVP. Because of this, the Warriors should’ve just been fine without Durant. Unfortunately and surprisingly, that hasn’t been the case.

Golden State has gone 5-5 in its last 10 games and are losers of three straight, something which the Warriors have not done since 2013. The Warriors even lost to the Timberwolves and Bulls, two teams that are under .500. Minnesota has been playing extremely well since the All-Star break and are laden with talent, but the Bulls have been a dysfunction all season.

During this stretch, Curry’s shot has been uncharacteristically off. His overall numbers are still brilliant, but Curry shot 30.2 percent from three in Golden State’s last 10 games. This is a significant decrease from his season average of 39.3 percent.

Thompson’s three-point shot is also not falling. In Golden State’s last 10 games, Thompson is shooting 29.7 from three, a drastic decrease from his 40.4 percent season average.

But what is surprising is that Golden State’s hold on the No. 1 seed in the West is becoming less and less secure due to San Antonio’s superb play.

The Spurs are currently half a game behind the Warriors for the No. 1 seed. San Antonio also has beat Golden State twice, meaning that they have the head-to-head tiebreaker, giving them an edge if the Warriors and Spurs end the season with the same record. The Spurs also play the Warriors one last time before the start of the postseason, which with the gap between them becoming so thin, could end up being a crucial game.

With San Antonio right on their heels, Golden State could very likely slide down the standings and end up as the No. 2 seed in the West.

The good news for the Warriors is that they have 16 games left in the season, 11 of which are at home, where they are a league best 26-4. The Warriors also play four games against some of the worst in the league like the Kings, 76ers, Lakers and Magic. And also, it would be highly unusual if both Curry and Thompson continue to struggle with their three-point shot, especially since they are getting open looks. After all, this is Curry and Thompson we are talking about here, two of the best shooters in league history.

San Antonio though, is lurking. They have 17 games left, 11 of which are at home, where similar to Golden State, they have played extremely well. But with LaMarcus Aldridge out for an indeterminate amount of time due to an irregular heartbeat, the Spurs may have a tough time surpassing the Warriors. San Antonio also play solid teams like the Cavs, Thunder, Timberwolves, Clippers and both the Jazz and Grizzlies twice to close out the season. Couple all of this with Spurs coach Gregg Popovich’s preference to rest players near the end of the season and San Antonio definitely has a hill to climb if they want to get the No. 1 seed from the Warriors.

All of this though, is amounting to some high drama out West as Golden State finishing with No. 1 seed in the West, doesn’t seem as much of a sure thing anymore.