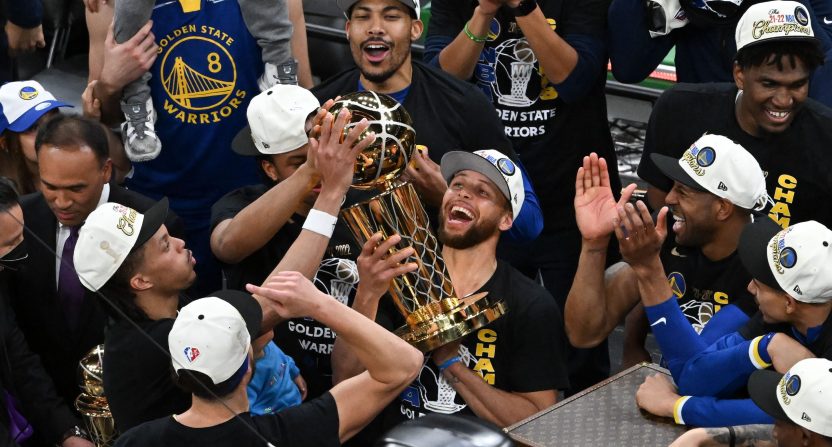 For the fourth time in eight seasons, the Golden State Warriors are the NBA champions.

Golden State defeated the Boston Celtics 103-90 in Game 6 of the NBA Finals on Thursday, wrapping up a 4-2 series win.

The Golden State Warriors are NBA champions for the fourth time in eight years!🏀🏆 pic.twitter.com/FmGNt20wU9

#DubNation, YOU ARE NBA CHAMPIONS ONCE AGAIN! 🏆

The game was a microcosm of the series overall. As they did in the series, opening up a 2-1 lead, Boston started the game strong and took a double-digit lead in the first quarter. But Golden State quickly stemmed that rush, aided by — among other things — Draymond Green finally finding his shot.

The Warriors led by 15 at halftime and opened up a 72-50 lead in the third quarter. Boston would close the gap from there, even getting the game to within single digits in the fourth quarter. But Golden State’s lead was never seriously challenged and the Warriors got to enjoy the final few minutes of the game with little doubt as to the final outcome.

As the game was coming to an end, NBA fans everywhere paid tribute to the champions.

Congrats to the warriors. Steph is unreal and cool to see them fight back after two down years, klay’s injuries and kd’s departure. Respect. Steph curry is incredible. My goodness.

The ESPN BPI gave the Warriors just a 14% chance to win the NBA Finals entering the series. https://t.co/EVwt5g5Wth

Warriors can really play 3 guys who don’t even look at the rim because Steph and Klay are generational in the attention they create. Its absurd.

Get used to hating the Warriors. Three promising young stars on the bench. Gonna be around a while longer.

They weren’t supposed to win this year. We heard it. We SAID it. JVG just called this the least talented of the #warriors championship teams. He’s not wrong. That makes this feat even greater. Nothing ever beats the first championship. I’d say this is an extremely close second.

Warriors had league's worst record two years ago, punted the lottery pick they got as their reward, and STILL are champions two years later. Wow.

Winning the title in Boston

What a crazy special era of basketball the Warriors have had.

As he’d done for most of the series, Steph Curry led Golden State on the night, scoring 34 points, matching Boston’s Jaylen Brown for the game high.