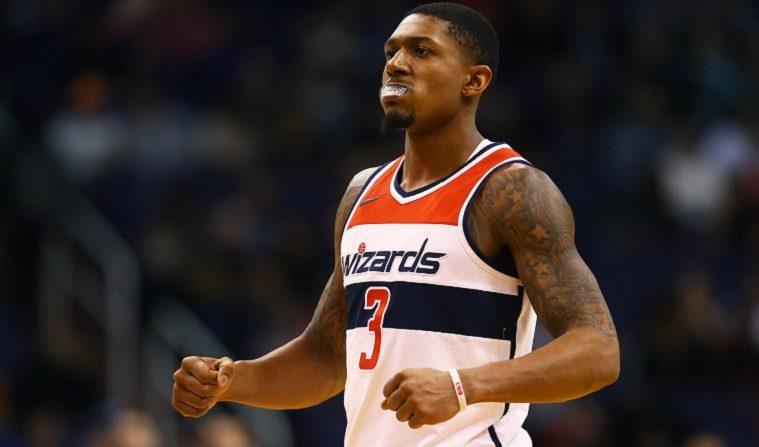 When asked prior to Tuesday night’s game against the Brooklyn Nets where he thought the Wizards needed to improve the most, Washington Wizards head coach immediately mentioned that his team needed to be better in closing out games.

“I think we’ve had a lot of close games that we felt that a couple things here, a couple things there could’ve gone our way and we could’ve won,” Brooks told The Comeback. “Those are the mental things that we have [to improve upon] to really be locked in.”

Unfortunately for Washington, Brooks’ pregame comments proved to be prophetic.

The Wizards gave up a three to Allen Crabbe with 44 seconds left, allowed a crucial offensive rebound with 13 seconds remaining that chewed up crucial seconds on the clock and when down by three with eight seconds left, Washington was called for a five-second violation for being unable to inbound the ball. That trio of crucial mistakes led to a 103-98 loss to the Nets, continuing a horrible trend for these underachieving Wizards.

Washington is now 4-8 this season in games decided by five points or fewer, after losing just nine such games all of last season (with 20 close wins). Four of those losses have come without John Wall, who’s missed 11 games this season, mainly due to a left knee injury. He could be back as soon as Wednesday, when the Wizards host Memphis.

Bradley Beal has tried to pick up Wall’s scoring while he’s been gone — and his shot selection has suffered a little because of it — but was adamant that all these close losses weren’t getting into his head.

“And I’m sure my teammates aren’t either,” Beal told The Comeback, certain that these losses weren’t impacting them mentally either. “We’re still confident and we’re still together. There’s no selfishness going on and there’s no pointing the finger at anybody, it’s just a frustration thing. We’re tired of losing. The only thing you can do about it is go out and win.”

After losing in a seven-game classic to Boston in last year’s Eastern Conference semifinals, expectations were high this year for a Wizards team that many thought could make a jump into the conference finals this season as Wall, Beal, Otto Porter and Kelly Oubre continued to develop. At 14-13 and in a four-way tie for sixth in the East, it’s been a disappointing first third of the season for Washington, to say the least.

“We’re a .500 team,” forward Markieff Morris told The Comeback. “We haven’t done anything. [That hype] is basing our shit off of last year.”

Statistically, the Wizards aren’t really doing that much wrong. They’re ninth in offensive efficiency and 12th on defense. They don’t take enough threes and too many mid-range shots, allow the fifth-most free throw attempts per game and are in the bottom third in giving up offensive rebounds. But they get to the line on offense, don’t turn it over much and opponents are shooting just 33.6 percent against Washington from three, the lowest percentage in the NBA.

“We were a great team last year, and it’s not too different of a team [this year],” Oubre said. “It’s in us, we’ve just gotta find it.”

“We’re a veteran team, we’ve been together for a while,” Morris said. “We gotta figure it out.”

Getting back Wall will obviously help, especially since the starting lineup has been slumping in his absence. The five-man group of Beal, Porter, Morris, center Marcin Gortat and point guard Tim Frazier have played 194 minutes together — the largest amount of time for any Wizards quintet this season — and are being outscored by 15 points during that time span, per NBA.com. Sub Wall in for Frazier, and that five-man unit is plus-11 in 169 total minutes. That 26-point difference may not seem like much, but based on how many close losses Washington has had this season, those points could mean a few more wins in their pockets right now.

“I have no idea how the Wizards lost that game” is something I’ve thought a depressing number of times this year.

“We want to be able to establish ourselves as a team that when the game is close, we can count on what we need to do,” Brooks said.

Once their late-game execution is better, things should start improving for the Wizards. They’ve played the 10th-easiest schedule so far, per ESPN, but games against the Cavs, Pelicans, Celtics and Rockets before the month ends will test them. Yet as long as this team continues to lose close games, it’s going to be a topic of conversation in the media, and probably in the locker room too.

“We’re not getting in our own head, we’re not sitting here and giving up on our year and saying we’re not a good team,” Beal proclaimed. “We know we’re a good team, we just gotta go out and do it.”