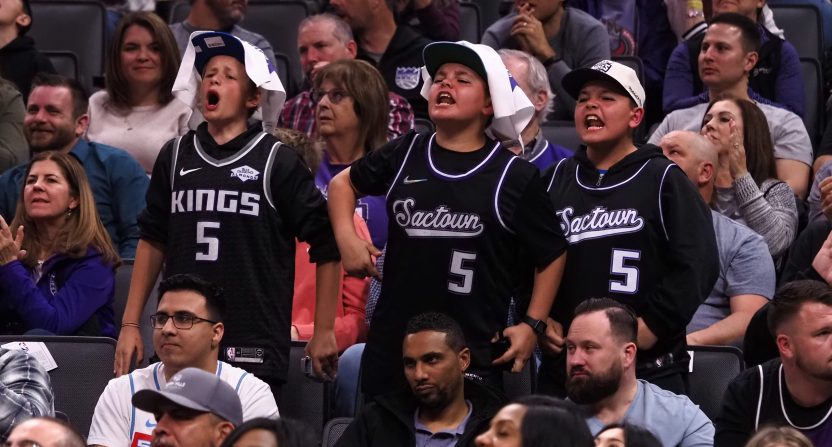 Being a Sacramento Kings fan is like saying you enjoy mediocrity without directly saying it. They have missed the postseason for 17 straight seasons and are known around the league for having one of the most dysfunctional front offices in the NBA.

Following another disappointing season that saw the Kings finish with a 30-52 record, fans of the team are looking for any sign of hope that things will be getting better.

During the ongoing California Classic Simmer League games, the Kings have impressed so far, winning their first two games against the Golden State Warriors and the Miami Heat. After their victory over the Heat 81-64 Sunday, Kings’ fans came pouring out of Chase Center and into the streets of San Francisco, hyped up and already declaring that their team will get 40 wins next season.

“WE’RE GETTING 40 WINS THIS YEAR” pic.twitter.com/yHplVfHnR5

The internet, of course, had a field day with this video. Some fans noted that even if the Kings do win 40 games, they will still finish two games under .500. Another fan noted that the last time the Kings made the playoffs, George W. Bush was still president.

Pretty lame to go at fans who still get this excited after a 16 year playoff drought….

I wonder how many people laughing at the “we’re gonna win 40 games” Kings fans realize the Kings haven’t won 40 games since Rick Adelman was coach in 05-06.

What you have to understand about Kings fans getting excited about the prospect of winning 40 games?

They haven’t won 40 since George W was President pic.twitter.com/N2XuHvaAr6

While it’s easy to sympathize with a struggling franchise like the Kings, their fans may have overreacted a bit after winning rather meaningless games that include players who mostly will fail to even make the final roster.

There was one bright spot in that Kings’ fans  (some seen at top during a March game) can hang their hats on. Keegan Murray, the No. 4 overall pick in the 2022 NBA Draft, had 26 points and eight rebounds, and went four-for-five from 3-point range.

Keegan Murray proving why he was a top-five pick 🪣