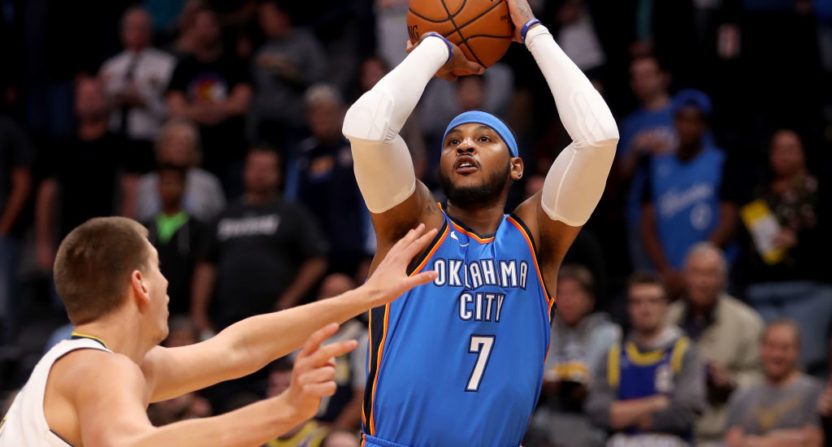 Moving from being the face of the New York Knicks to a supporting cast member on the Oklahoma City Thunder was expected to be a big change for Carmelo Anthony, and it was. After coming to grips with his new position in the NBA, Anthony says he has started enjoying the game all over from a fresh new angle.

“Once you accept something, regardless of what it is, I think you become comfortable with it,” Anthony told reporters after Oklahoma City’s 114-90 victory against the Los Angeles Lakers on Wednesday night, according to ESPN. “You start putting your all into it, you start working on that role and on that acceptance, and it becomes fun. I think right now, after accepting that role, I think early in December, the game is starting to become fun again for me, fun for us as a team. Any time you get to making shots and winning basketball games, it makes it that much more fun.”

It may also help that Anthony is no longer on a Knicks team in constant chaos and struggling in the standings and is now on a team vying for a top-four seed in the Western Conference with a team that has players that can have a significant impact on the court. Anthony no longer feels the pressure or the need to take control of a game the way he often did in New York. He can still have his own impact on a game, which is why the Thunder brought him in.

He did just that last night with 27 points and four three-pointers to lead the way.

Carmelo Anthony recorded 27 PTS in 27 minutes and the @okcthunder took down the @Lakers at home!#ThunderUp pic.twitter.com/EZ5miEbPYL

“Tonight was just one of those nights where the shot was falling and the game was fun,” Anthony said. “And we took advantage of that.”

With Anthony finding his groove on the Thunder now after getting himself adjusted to his new position on the team, the Thunder should benefit moving forward by having a rejuvenated Anthony to rely on. Having Westbrook and George puts Oklahoma City in a great position, but having Anthony complementing their efforts and being capable of putting the team on his back when needed will keep the Thunder one of the more dangerous teams in the NBA in the second half of the season.