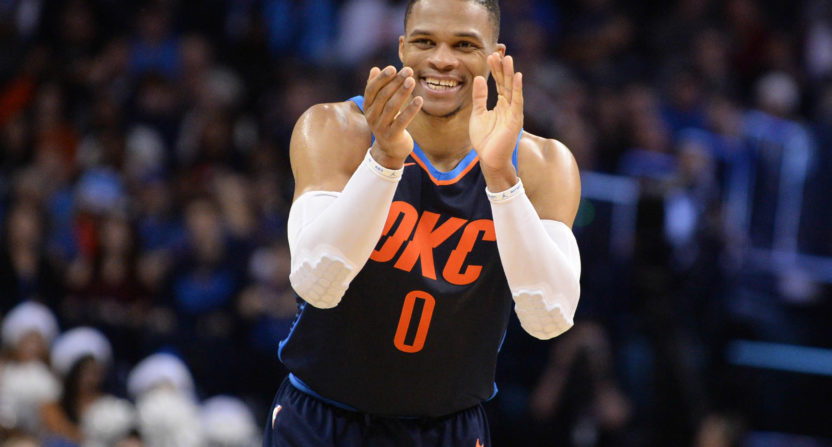 At Bleacher Report, he’s listed just outside the Top 10 as the 11th best player on the eve of the NBA Playoffs. At SB Nation, he at least has the honor of squeaking into the Top 10 on their playoff list, one slot ahead of the ambiguous “Raptors Bench.” He’s an afterthought in this year’s MVP race. In many ways, he’s the forgotten man of the 2017-2018 NBA season.

He is Russell Westbrook and what he has achieved over the last two seasons is one of the greatest feats in the history of the NBA. Maybe that any of us will ever see in our lifetimes. And yet nobody seems to care.

Last season Westbrook made history as only the second player in NBA history to average a triple-double in a single season, matching the mythical milestone of Oscar Robertson all the way back in 1962. This season, Westbrook became the only player in NBA history to do it twice. Westbrook averaged over 15 rebounds per game over the course of April to raise his numbers to the point where he secured the triple-double. He finished the 2017-2018 season with a statline of 25.4 PPG, 10.1 RPG, and 10.3 APG.

The triple-double over the course of 82 games was an accomplishment that few probably ever realistically expected to see in our lifetimes. It was one of those “unbreakable” records that seemed to be from a time gone by that only exists as legend. Like Wilt Chamberlain scoring 100 points in a game or Ted Williams batting .400 or Joe DiMaggio’s 56 game hitting streak.

But not only has Westbrook actually done it once, he’s now done it twice.

And yet nobody seems to care.

It’s a shame that such a previously incomprehensible statline has been met with a collective “meh” from the general sports fan. How can that be? Well, there are logical reasons that exist that explain it.

For starters, the Oklahoma City Thunder just aren’t seen as a legitimate contender for the NBA Championship. The Thunder enter the NBA Playoffs as the #4 seed in the Western Conference after a 48-34 regular season. While that’s a pretty good record, they’re far off the pace set by the Houston Rockets and at best it’s likely that the team won’t make it out of the second round this year. The Thunder’s current “Big 3” of Westbrook, Paul George, and Carmelo Anthony just doesn’t stand up to the days of Westbrook, Durant, and Harden, nor does it stand much of a chance of competing with the NBA’s upper echelon.

Last year Westbrook’s one-man show was one of the most captivating stories in the league as he took vengeance against the entire NBA after Kevin Durant left him high and dry for the greener pastures of Golden State. He put up statlines we’ve never seen before like his 57-13-11 performance against Orlando. Now with Anthony and George, the me-against-the-world mission seems to be lacking from Westbrook’s story. And this year, with Westbrook already having averaged the triple-double the year prior, there was nothing to chase. Only to replicate.

And to tell the truth, the biggest factor working against Westbrook may be Westbrook himself. He was just better last year in every regard. It sounds a little absurd. Like saying that Babe Ruth had a down year in 1928 because he only hit 54 home runs instead of 60 home runs the year before. Looking at Westbrook compared to last season, he had a dip in all three of the major categories.

The final thing working against Westbrook? It’s nothing more or less than the way we are as people and as fans. There aren’t many sequels that enjoy greater success and popularity than the original. (Although I’m probably one of the few people walking earth that contends Major League II was a better movie than Major League.) Westbrook wasn’t one of the lead stories on SportsCenter every night, he wasn’t a constant debate topic, he didn’t trend as much. He didn’t draw as much attention as last year because people had seen it all before.

Westbrook’s heroics didn’t resonate in the same way that Ben Simmons and Joel Embiid and the young 76ers were as they tore through the Eastern Conference at the end of the season. They didn’t have the drama that afflicted the Cleveland Cavaliers all season long. It didn’t result in wins that could keep pace with the Rockets. Go on down the list and this year Westbrook’s triple-double may not even make the list in the top ten most talked about stories of the NBA season this year.

So yes, it makes sense that Westbrook flew under the radar this season. But that doesn’t mean that we shouldn’t take just one second before the playoffs again to stop and marvel at just how remarkable Westbrook’s play has been over these past few seasons and the numbers he has put up.

In the tens of thousands of players and the hundreds of thousands of seasons that have ever been contested in NBA history, only one person had ever averaged a triple-double over the course of a season before Westbrook. And now he’s done it twice! Stop and think about how absurd that truly is. It’s a feat that’s happened just three times in NBA history. Bird never did it. Nor did Magic. Or Kobe or LeBron or MJ. And Westbrook has done it twice.

Imagine if Mike Trout hit 75 home runs in back-to-back seasons. Or if Aaron Rodgers threw for 60 TD passes in consecutive years. We would be hailing it as the greatest seasons ever. That’s the conversation Westbrook should be in right now. But he’s not, because it’s something that we’ve come to accept as the norm.

Hopefully history is a little more kind to Westbrook and remembers more fondly what we seem to take so easily for granted.