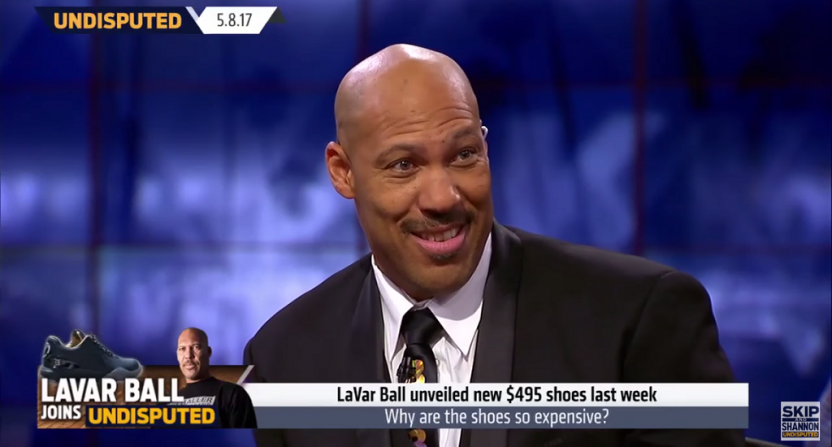 In sports, you need heat, if not hate, and every drama needs a villain. If LaVar Ball didn’t exist, it would be necessary to invent him. Loud mouth! Helicopter dad! Beelzebub! Usually, such vitriol is reserved for people who have caused you personal anguish.

Charles Barkley has called Ball the most disliked person in sports. Nike executive and former coach George Raveling described Ball as “the worst thing to happen to basketball in the last hundred years.”

It’s both fascinating and alarming how many people tend to agree. No matter what Ball has said, the level of hostility in return isn’t a proportional response. This isn’t meant as a defense of Ball, who seems to enjoy being portrayed as the bad guy. However, you have to wonder what our animosity towards Ball says about us.

Ball isn’t Floyd Mayweather Jr. He’s not Christian Laettner. He ain’t Sepp Blatter. Ball doesn’t have a criminal record, hasn’t beaten your beloved sports team with an historic last-second play, and he hasn’t presided over a corrupt enterprise. He’s a dad with gifted sons who is trying to sell basketball shoes. His biggest offense is arrogance.

The bigger question is why do we feel offended?

LaVar Ball is the world's best heel. One lucky fan is walking away with a Big Baller Brand hat. pic.twitter.com/GMhGbVTjfv

Ball is confident, boastful, probably delusional about who he is and the abilities of his offspring. There are those who worry that his boasts will harm his son’s career. LaVar Ball’s mouth is writing checks that Lonzo Ball can’t cash.

We might not be giving Ball enough credit. Maybe it’s all vaudeville.

Ball is simply playing the role of a WWE heel. He has stepped into the ring preening, yelling and commanding the crowd to acknowledge his greatestness. Cue the Million Dollar Man Ted DiBiase’s evil laugh. Maybe he’s a new-age Andy Kaufman, blurring the line between what is real and what is a performance.

We, the public, respond like Pavlovian puppies who have just heard the bell ring. Outrage! We boo. Ball heard it from the NBA Draft night crowd.

Well, if you’re sick of him now, get ready for more. Ball’s metaphorical wrestling megaphone is only going to get louder. Crank up the volume because his super-talented son Lonzo Ball will be the point guard for the Los Angeles Lakers. Some despise Daddy Ball so much that they’re actually rooting for his son to fail. That is an incredibly sad viewpoint.

Really really bummed that Lonzo Ball is heading to the Lakers. I try really hard to stay positive but I am totally rooting against him now.

does anyone else think Lonzo Ball is gonna bust? Maybe I just hate his stupid dad that much

Weird. Never met Ball. Never interviewed Ball. Don’t really know if he is truly leery of Caucasian basketball players. Don’t know if he’s misogynistic. Don’t know if he’s bat-shit crazy. Do know that he has used media exposure to elevate his cartoonish profile. He’s borrowing the same playbook that has made Stephen A. Smith, Nancy Grace and Rush Limbaugh millionaires. Smith, Grace and Limbaugh can’t hear your complaints. Why? Because their ears are stuffed with cash.

Ball isn’t there yet, but you can see him working. What is the use in being humble, quiet and respectful? How many other fathers of NBA draftees have their own Wikipedia page and get to be on First Take? There’s no money in being meek. Ball is a businessman, selling himself, his sons and his shoes.

Be honest. If you were trapped in an elevator, would you rather be stuck with Smith, Grace, Limbaugh or Ball? Ball would be the most palatable of those choices. At the very least, you wouldn’t get cold because he would cloth you with Big Baller Brand gear.

The Unholy Trinity of Hot Takes – Smith, Grace and Limbaugh – would just scream and blame you for the elevator breaking down.

You can’t fault Ball. He’s in it for the dollars and the betterment of his family. When the cameras are off and the microphones are put away, he might be Pope Francis. But would we care? LaVar isn’t the first sports dad to be perceived as an overbearing impediment. He’s just the latest. The spotlight for him is brighter because we live in the golden age of social media.

Decades earlier, Richard Williams was viewed as an obnoxious kook whose forceful personality might derail the careers of Serena and Venus Williams. Richard Williams is owed an apology. Thanks to him, his daughters are one of the greatest success stories in sports history.

Ball is trying to carve out a similar path for his sons. It may not be the way you or I would choose to do it, but it doesn’t mean that he’s wrong. There appears to be a method to the madness. Michael Hafford wrote the following about Ball in an article for Rolling Stone:

“His eyes shine while he speaks; if he doesn’t believe what he’s saying, you’d never know it. But you sense he cares, and that he loves his kids deeply. It’s unclear whether that’s because of what it would mean for him, or what it would mean for them, but he cares more than almost anybody you might ever encounter in your lifetime.”

Ball might not succeed at business. Big Baller Brand could be an absolute bust. But Ball seems to be working hard to be a successful parent. That’s an admirable quality regardless of your personal feelings.

The root issue here really isn’t about Ball. Ultimately, it’s about us. We don’t have to bitch to ESPN. We could simply choose to ignore him. Turn down the volume or change the channel. That’s not happening. We feel a need to complain about something. Let’s complain about Ball and how he’s ruining society.

Sports hate isn’t real hate. But because of the passion we have for sports, the venom stings. And for what LaVar Ball is – a mouthy sports dad – the negative responses seem unusually cruel. You’re hating on a guy you don’t know. That’s not civilized, fair or kind. We don’t know LaVar Ball. We just know the image of him that we see. So we take the easy route.

It’s always easier to hate someone you don’t know.