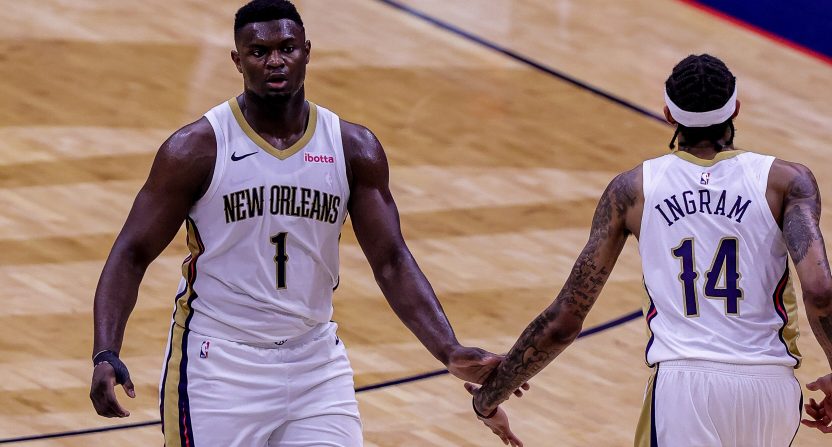 Last season, the New Orleans Pelicans finished 11th in the Western Conference, seven games back of eighth place and two out of the NBA play-in tournament. This was despite putting two legitimate All-Stars on the court every night, including one that dominated the paint like Shaq.

To fix that underperformance, they’ve been fairly active this offseason. But it’s not clear that any of the moves they’ve made will help Zion Williamson and Brandon Ingram reach the postseason.

They were likely aiming bigger. Cap space was a big reason for their blockbuster trade of Adams, Bledsoe, the 10th pick in this year’s draft, and a 2022 protected first for Valanciunas and the 17th pick. That cap space, which they surely would have liked to use on Kyle Lowry, has not amounted to much. With the caveat that the Pelicans have the weapons to make more moves in the coming months, they haven’t actually upgraded the team to any significant extent.

(One important thing to mention is that the Pelicans could be players in a potential superstar trade market, if it develops. An offer centered around Ingram to the Portland Trail Blazers for Damian Lillard would certainly be competitive. New Orleans has lots of picks left to trade even as they’ve flung away a handful this offseason.)

Letting Ball walk was a bewildering decision. The hesitancy to pay him, I’ll admit, is understandable. An average annual salary of $20 million is a lot, and the Pelicans clearly thought they would have a better use for that cap space. But they didn’t find one, and Ball is exactly the type of player the Pelicans should be chasing to begin with. He’s a starting-level role player who meshes well with stars. If the Pelicans think that Williamson and Ingram (ages 21 and 24, remember) are All-NBA-level players, then Ball is a hand-in-glove fit.

Everyone needs players that can shoot threes, defend, and make smart decisions. Those are literally Ball’s three main strengths! He shot 40 percent on catch-and-shoot threes last year on high volume. He struggles on pull-up threes, but so do most players. The Pelicans can find that sort of scoring touch elsewhere, which they did by acquiring Graham.

We know Ball can struggle to orchestrate in the half-court at times. But how necessary is that skill for this team? They improved a lot last season when Stan Van Gundy unleashed Point Zion, with Williamson running pick-and-rolls as a ball-handler and initiating the offense himself more frequently. We’ll be seeing that more next season, I would imagine. Ball is a great floor-spacer for those plays.

The value Ball provides as a passer shouldn’t be overlooked, either. He generates buckets in transition, and is a perfect running partner for Williamson. With his much-heralded basketball IQ, he can keep the offense flowing in the half-court either as an initiator or as a catch-and-drive role player.

Every offense needs those players. We see every year in the playoffs how important players like Jae Crowder and Jeff Green become. They’re perfect fits next to stars, because in addition to being willing shooters, they’re smart ball-movers who can see the game and keep things moving. Ball, as a point guard, has a much deeper passing repertoire than Crowder or Green. He’s still 23 and has proven to be capable of improving useful facets of his game.

Acquiring a guard who can add another offensive dimension was an understandable goal. Lowry would have been perfect, and letting Ball walk was necessary to have a chance at him. But they missed, and they’ve brought in no players who can approximate that value. Ball also doesn’t have to be penciled in as a point guard. He has the size to play very credibly alongside smaller players who might add that off-the-bounce verve that the Pelicans crave.

This is all without even mentioning defense. Ball is an above-average defender, with good instincts and length. His apparent replacement, Graham, is 6’1″ and a clear downgrade on that end from Ball. That’s not a good sign for a team that desperately needs good defenders. The Pelicans ranked 23rd in defensive rating last year, and neither Williamson nor Ingram is a particularly good defender.

While Graham won’t fix the defense, he does provide abilities on offense that Ball didn’t. For one, he’s a willing and capable shooter on both pull-ups and catch-and-shoot looks. He isn’t a great finisher, but he’s comfortable penetrating defenses at the point of attack. His confidence and shot-creation make him an effective player in clutch moments, something that the Pelicans needed.

One overlooked skill that Graham will add: smart off-ball movement, particularly on the perimeter. Graham is always active off the ball. He’s a great cutter, but he sets himself apart with his subtle movement on the arc, generating catch-and-shoot looks for himself by taking advantage when opponents overhelp.

It isn’t much, but watch him make a quick move to the top of the arc as PJ Washington drives and occupies Graham’s defender, Michael Porter Jr.:

Making yourself available is a skill. It’s important to move in sync with the rest of the offense to make passing lanes easy and available. Graham is smart about putting himself in the vision of ball-handlers. It’s a great way to compensate for a size disadvantage, and with his confidence and shooting ability (37 percent over the last two years), it helps him consistently add offensive value.

Still, Ball fit perfectly as a role player (he and Graham together would’ve made sense!), and the defense is going to be a problem again.

Swapping Adams for Valanciunas is an upgrade. Valanciunas was often the Memphis Grizzlies’ most important player last season, a skilled paint scorer who can overpower most centers and vacuum offensive rebounds. He provides a level of offense that Adams didn’t, and he’s also not a complete non-shooter — he’s increasingly been known to pop for the occasional three, and it’s likely that the Pelicans will ask him to do more of it.

But Valanciunas attempted 0.9 threes per game last year and made 36 percent of them. Williamson needs spacing, and Valanciunas owns the paint. Many of the Pelicans’ offensive issues last year stemmed from poor spacing, with Adams’s presence causing issues for Williamson’s drives. The cramped floor made playmaking even harder for Ingram. Valanciunas, pending a massive leap, solves none of those problems.

He’s also a slight downgrade on defense from Adams. It’s not like Valanciunas is bad on defense, but he’s not the sort of floor-elevating rim protector that would have been worth that hefty price they paid for his services.

The platonic ideal for the Pelicans at center would have been a legitimate stretch five that can also defend at a high level. Those players, obviously, do not grow on trees. But it’s hard not to look over at the Indiana Pacers’ Myles Turner — who’s been a trade candidate for a few years now — and wonder what could have been. Turner is still only 25 and embodies that platonic ideal. Even if it meant not generating the sort of cap space they did in the Valanciunas deal, finding a way to acquire Turner (easier said than done, I realize) would have been perfect.

It’s looking like internal improvement is going to be a big determining factor in whether the Pelicans can do anything more than hang out at the outskirts of the play-in tournament. Williamson and Ingram will likely only get better offensively. Figuring it out defensively would be a huge boon.

Williamson has been a negative on that end, but he has gradually improved, and as we’ve seen with other players (Deandre Ayton, for example), it can take a couple of years to get used to NBA defense. Zion’s athleticism and awareness — he has a very natural feel as a passer, remember — are why he has a legitimately high defensive ceiling.

His leaping ability is the biggest reason. Watch his contest on this Julius Randle drive:

Already, his strength comes in handy as he leads Randle away from the basket, and his feet shuffle to stay in front. But Randle probably thought that would be a makeable hook shot on his favored left hand. Williamson gets so high so fast that he affects the shot out of Randle’s hand and forces a wild miss.

From the same game, here’s Williamson using his ridiculous bounce to shut down multiple looks at the rim:

His height could make it difficult to play the five full-time against some centers, but this sort of leaping ability is an incredible asset.

Ingram also has high potential on defense. He has length and agility on the perimeter, and could be a very useful help defender. His issues have often stemmed from inattention, which could be fixed by playing on a winning team with more at stake.

It’s certainly possible that continued improvement from the stars (and from players like Nickeil Alexander-Walker, who will see more minutes) could lead to New Orleans living up to their on-paper talent. But letting Ball go was a decision that made little sense with no Lowry-type upgrade on the way, and doubling down on their paint-bound center archetype was another odd move. Until the Pelicans start diagnosing their own problems more effectively, they’re going to have a hard time getting the most out of their All-Star duo.