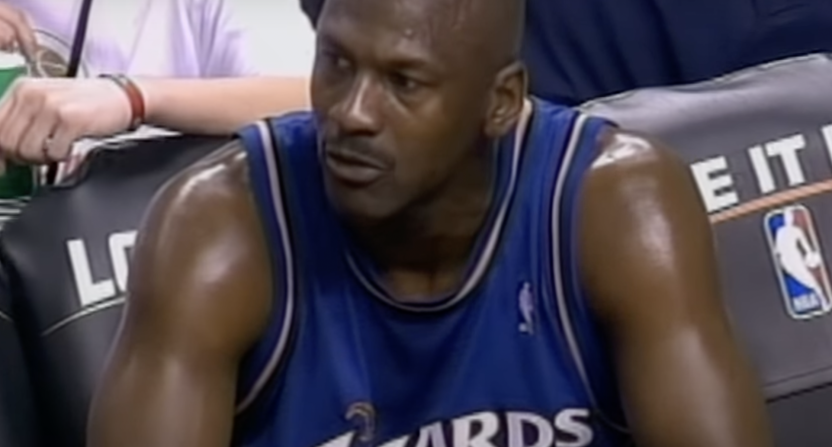 The “butterfly effect” is when even a small change could result in larger changes in the future. Sports are no exception to that phenomenon. There have been so many monumental, history-defining moments in sports but if some of those moments hadn’t happened or if their outcome had been different, our view of sports as we know it may be vastly different. “What if…” looks at some of these big moments and speculates on how that sport, or maybe sports in general, may look if the outcome had been different. This week, we take a look at what might have happened if Michael Jordan stayed retired in 1998 and not played for the Washington Wizards. Future installments will be on Awful Announcing and The Comeback.

After Michael Jordan retired from the Chicago Bulls for the second time, many thought it was for good. Sure, Jordan retired in 1993, but after retiring at 30, there was some hope that MJ would come back to basketball.

This time, retiring at 35 seemed final. Jordan won six consecutive NBA championships he played in and with an impending rebuild by the Bulls coming, Jordan retired while on top. It would be near impossible to come back and come close to matching what he did in Chicago.

Almost a year later, Jordan joined the Washington Wizards as a part owner and president of basketball operations. It was a different kind of competition, but it wasn’t long until the court was calling for MJ.

In September 2001, inspired by Mario Lemieux’s comeback as an owner-player for the Pittsburgh Penguins, Jordan decided to do the same and come out of retirement for the 2001-02 season. Jordan spent the first half of 2001 training, and he hired his former Bulls coach Doug Collins for the upcoming season.

Jordan’s spell with the Wizards was expectedly underwhelming compared to his Bulls career, but stats wise, it wasn’t so bad. His first season was plagued with injuries to his knee, and he averaged 22.9 points over 60 games. While it was a drop of nearly six points per game, Jordan’s assists per game went up by nearly two per game, and the rest of his stats were similar to his Bulls tenure. Not bad for a 38-year-old who didn’t play for a couple years.

After retiring for the third and final time after the 2002-03 season, Jordan was fired from his front office role with the Wizards. And after a few years investing in non-basketball ventures, MJ joined the Charlotte Bobcats (now Hornets) in 2006 and bought a minority stake in the team. Four years later, Jordan became the majority owner of the team.

Nowadays, Jordan remains majority owner of the Hornets, where his ownership tenure has had mixed results. In 2020, MJ announced he was entering NASCAR, teaming up with Denny Hamlin to own 23XI Racing with Bubba Wallace as the driver.

What if MJ never played for the Wizards?

I realize some people may have felt Jordan hurt his legacy by playing for the Wizards, but after nearly 20 years since then, has it really? Sure, it would’ve been best to retire while on top and winning three consecutive NBA championships, but it’s not like MJ’s Bulls legacy was tarnished.

These days, it feels like Jordan’s Wizards days are a distant memory and we only really remember his Bulls run in the first place. So any concerns about Jordan’s legacy being tarnished by playing for Washington don’t really hold up.

Jordan coming back to play for the Wizards was ultimately for the greater good. Sure, Jordan wasn’t as good with the Wizards, but his final run gave even more people a glimpse at “Air Jordan” that they may not have had if he stayed retired in 1998. It may have only been a difference of five years, but to those who are currently in their early-to-mid-30s (like myself), they’re arguably more likely to remember Jordan playing with the Wizards than with the Bulls and they were in elementary school.

In addition, we got a chance to see Jordan play more games against the up-and-coming stars of the NBA.

Look at all the players who got to play against MJ at this time. Yes, guys like Allen Iverson and Kobe Bryant were already in the NBA when Jordan was with the Bulls, but they got to play against the man while they had more experience and were the best players in the league. Along with AI and Kobe, we’re talking about players like Steve Nash, Ray Allen, Tim Duncan, Tracy McGrady, Vince Carter, Dirk Nowitzki, Paul Pierce, Pau Gasol, and Yao Ming who got to play against Jordan because he played for the Wizards.

Without all of this, Michael Jordan would still be the GOAT and would’ve retired a champion, but something would’ve been missing. That two-year run wasn’t perfect, but it gave us another dimension to the “Greatest of All-Time.”