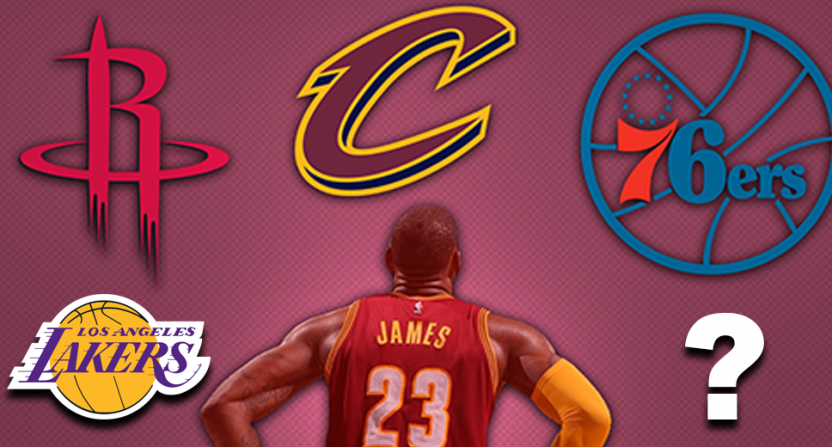 The 2017-18 NBA season is over after the Golden State Warriors completed a four-game sweep vs the Cleveland Cavaliers on Friday night. And now the biggest topic in the NBA becomes the future of LeBron James (at least after everyone stops talking about LeBron playing the last three games with a seriously injured hand).

Oddsmakers currently have the Lakers, Rockets, Cavs, and 76ers as the favorites to sign him, followed — after a big dropoff in odds — by the Celtics, Spurs, Warriors, Clippers, and Heat.

Odds on what team LeBron James will be on next season (@betonline_ag):

Should he join a Rockets team that was one win away from the Finals and may have gotten that win if Chris Paul didn’t get hurt? Should he join young stars Joel Embiid and Ben Simmons in Philadelphia, and make the 76ers the Eastern Conference favorites? Should he go to the up and coming Lakers and perhaps get Paul George to join him? Should he just stay with his home-state Cavs, who can offer him the most money? Should he make a return to the Heat? Or should he sign somewhere else?

Here’s what our crew at The Comeback thinks…

Alex Putterman: I’ll say he re-signs with the Cavs.

We all know Cleveland doesn’t give LeBron the best chance to win, but you have to wonder whether at this point if his priorities have shifted. He’s got titles and Finals berths and accolades and adoration. His legacy as a top-two (and quite arguably top-one) player of all-time is fully secure. He doesn’t need to team up with James Harden or Joel Embiid to chase championships. In fact, doing so might be kind of stressful. Whereas in Philadelphia, Houston or L.A. he would be under immense pressure to deliver a title, in Cleveland, he can coast off the one he already won there and enjoy the rest of his career as a hometown superhero.

I thought he would stay in Cleveland in 2010, and I figured he would stick in Miami in 2014, and I was wrong both times, but I’m tripling down. LeBron isn’t going anywhere.

Joe Lucia: I vote for the Cavs, because it would probably create the most milquetoast takes and thus, make my job less stressful.

Phillip Bupp: About a week ago, I was convinced LeBron was going to stay in the Eastern Conference and sign with the 76ers. But given I was increasingly expecting Bryan Colangelo to stay on, I thought LeBron would have been turned off with that offer.

But now that Colangelo is gone, I feel the Sixers are back in the driver’s seat for LeBron. I think he’s done all he could with the Cavs so I can’t see him staying. And between the most likely teams to sign LeBron (Rockets, Cavs, Sixers, and Lakers), the Rockets and Sixers are set up best to win now. The Lakers are still a year or two away and LeBron knows time is ticking on his career, so it’ll be the Rockets. What sets the Sixers apart from the Rockets is that by staying in the East, LeBron avoids the Warriors until the Finals. And that’ll be the key in deciding where to go.

Jay Rigdon: This is, on the surface, a homer answer. But he should sign with the Pacers. Think about it. He would move to an instantly better situation, playing alongside Victor Oladipo, Myles Turner, and Domantas Sabonis. He’d avoid the appearance of The Decision because he’d be heading to another mid-sized, Midwestern market, one that has supported its team for a very long time despite the Pacers never winning an NBA title. And he’d still avoid the Western Conference.

Andrew Bucholtz: I think the two most interesting options are the Rockets and the Sixers, and both have elements to recommend them.

The Rockets seem built to take on the Warriors, they got the closest to doing so, and they’re a team with a lot of veterans that would seem to be a fit for the “Let’s win now” idea. Chris Paul in particular seems like a good match for LeBron. But they play in the tough West, James Harden needs a lot of the ball, and they’re so focused on threes.

Meanwhile, the Sixers have a younger team that might seem not as perfect of a fit, but Ben Simmons and Joel Embiid both excel without needing the offense to go through them all the time, and the East still seems much easier. There’s a lot of uncertainty with their front office post-Colangelo, though. I think if LeBron’s most worried about winning a title at all costs, he goes to Houston, but if he wants to remain the unquestioned top ball-handling star, he goes to Philadelphia.

Ben Koo: Call me crazy but I’d take the field on this question. Every team in the NBA is going to try to get in the door with LeBron and his people. I see some obvious issues with a lot of the places oddsmakers have him pegged to going.

Somewhat a hunch and somewhat me being a contrarian… I wonder if he’ll see a better fit somewhere NBA pundits and oddsmakers just don’t foresee as a destination for him. LeBron has maybe three years left in his prime. Part of me thinks he’ll snub his nose at conventional thinking now that he has three rings –including one in his home state — and will look to find a fit where a team can be built around him to compete now, but also have some flexibility to adapt as time inevitably catches up to him.

LeBron wants to win more than anything, but I think he’ll priortize comfort and flexibility which may bring him to a place that we just don’t see as an obvious destination for him.

Michael Grant: While Cleveland can offer him the best financial deal, I don’t think money is as important to LeBron as power/leverage. He doesn’t trust Cavs owner Dan Gilbert and appears to be fed up with management. LeBron is looking for a place where ownership will view him as a partner. The Lakers seem willing to do that.

It’s time for a new challenge. What better way for LeBron to enhance his legacy by going out West? He’s made it to the NBA Finals eight straight times in the East. Can he do so in the West which has been dominated by Golden State?

Assuming LeBron brings along Paul George, the Lakers could be a 55+ win team quickly. The key is: what does LeBron think of the roster? Does he believe Lonzo Ball or Kyle Kuzma will be the next great star? Or is there someone else in free agency or the draft that will help? To topple Golden State, you’re going to need at least three great players.

Matt Clapp: I definitely think the Rockets, 76ers, Cavs, and Lakers are the most appealing options for LeBron. But I’m slightly leaning Rockets. LeBron turns 34 in December, and I think he’s pretty frustrated about how the last two seasons concluded (particularly this one with how ugly it was and how little help he had).

Maybe the 76ers are ready to win a title now with him (on paper they certainly would be a juggernaut), but you never really know how a young team will handle the Conference Finals and Finals until they’re there.

The Lakers are likely multiple seasons away from serious contention even if LeBron and Paul George went there; that team isn’t beating the Warriors next year.

The Cavs offer the home-state comfort and his family may be happy there. If that stuff is the most important thing to him at this point, then he should just stay home and sign the biggest contract in league history. A star or two would surely tag along at some point.

But right now, the Rockets offer the best opportunity to win. Yes, they’d have to get through the Warriors. But say he went to the East… the Celtics didn’t have Gordon Hayward all season and didn’t have Kyrie Irving for the playoffs, and they were one win away from the Finals (yes, in a laughable East, but still). Young stars like Jayson Tatum and Jaylen Brown will get better, and they have a fantastic head coach in Brad Stevens. That team could be a full-on juggernaut as soon as next season and would provide a huge challenge for LeBron if he went to Philadelphia, and especially if he stayed in Cleveland (in which case, the 76ers would also be a problem).

So I’m not sure having to beat the Warriors with the Rockets is necessarily a bigger challenge than having to hold off the Celtics in the East. As we just saw, this Rockets team had a 3-2 lead in the WCF against the Warriors before Chris Paul got hurt. So how good could they be if they added the best player in the world to the roster? Even if the rest of the team peaked in 2017-18, the 2018-19 Rockets would be a ridiculous team with LeBron and a very real threat to the Warriors, again.

4 thoughts on “What team should LeBron James sign with this offseason?”