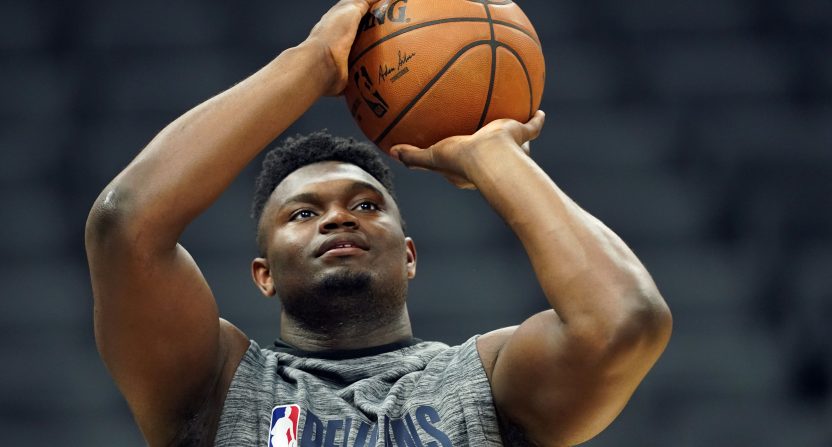 Believe it or not, the restart of the NBA season is just two weeks away. Get ready to get weird. The NBA in a ‘bubble’ in Orlando. Games with stakes being played at neutral courts without fans, and with the threat of COVID-19 lingering in the air.

Here are some things to watch for:

Time is running out for LeBron

No person stands to lose more than LeBron James if the season can’t be completed. The window for the LeBron-led Los Angeles Lakers is closing. LeBron is 35 and will turn 36 in late December. While he has enjoyed an MVP-worthy season, he probably only has a few more seasons of elite play left. And remember, All-Star tag team partner Anthony Davis will be a free agent in the offseason. Davis is expected to re-sign with Los Angeles, but there’s no guarantee.

The NBA stoppage occurred right when the Lakers were surging. They had just beaten the Milwaukee Bucks and the Los Angeles Clippers. The Lakers (49-14) have the top record in the Western Conference, and are only two games behind the Bucks for best overall mark.

James and Davis form the best 1-2 punch, with LeBron racking up 172 assists to Davis. That’s the most prolific combination in the NBA. It’s also a big reason Los Angeles is fourth in offensive efficiency, third in defensive efficiency, and second in scoring margin (+7.4). Asterisk or not, LeBron will try for his fourth championship and third with a different team. That’s something that will bolster his argument against Michael Jordan as the greatest ever.

76ers: Great at home, terrible on the road, TBD on a neutral court

Philadelphia’s home and road splits read like an egregious clerical error. Perhaps never has a team this talented been this erratic. The 76ers went 29-2 at the Wells Fargo Center for the best home mark in the league. On the road, they went 10-24. There’s no reasonable explanation for their road woes. Philadelphia went 20-21 on the road last year, and came close to winning a Game 7 on the road against the Toronto Raptors in the Eastern Conference semifinals.

But now, everything is different. These will be neutral site games with no crowds. How will Philadelphia react to that? One of the biggest problems for the 76ers is that their franchise players Ben Simmons and Joel Embiid seem to have difficulty playing together at times. Simmons can’t shoot (2-of-23 for his career from three-point range), which creates spacing issues for the offense. That wasn’t as big of an issue last year when Philadelphia had long-distance threat JJ Reddick. One curious strategic move might help. Simmons is expected to play power forward in Orlando. If he can have a Draymond Green-like effect on the offense, this could work.

So much for the Clippers’ load management strategy

The Clippers (44-20) were going to load manage their way to the franchise’s first title. Keep Kawhi Leonard and Paul George fresh for the playoffs. That strategy worked to perfection last year when a well-rested Leonard led the Toronto Raptors to a championship. Leonard has played 51 games. George 42. They have only played 24 games together, going 17-7. Not much of a sample size to determine how good Los Angeles can be with this dynamic duo. But the original plan was to unleash Leonard and George in the postseason while everyone else had tired legs because of the NBA’s grueling 82-game season.

That advantage is now a moot point due to the COVID-19 work stoppage. Everyone is probably at the same level. L.A. still has the talent, and is one of the deepest teams in the league, with guard Lou Williams (18.7) and forward Montrezl Harrell (18.6), both Sixth Man of the Year candidates. You can argue that Leonard is on a better team than the one he won a championship with last year. But the circumstances might make this a more difficult title run. Especially with the equally well-rested Lakers team potentially in their way.

Giannis’ quest to become the new championship face of the NBA

Giannis Antetokounmpo is the favorite to win his second straight MVP and possibly his first Defensive Player of the Year award. The Milwaukee Bucks (53-12) own the NBA’s best record, and for a while, they were on pace for a 70-win season. Their scoring differential (+11.3) is currently the fifth-best of all-time. Everything was set in place for to finally make the NBA Finals. There wasn’t a team in the Eastern Conference good enough to seriously beat the Bucks over a 7-game series. However, after a long layoff, we don’t know what to expect.

Antetokounmpo is an unstoppable force. But following a dominant regular-season last year, he was dismantled by the Kawhi Leonard-led Toronto Raptors in Eastern Conference Finals. After the Bucks won the first two games, Antetokounmpo was outplayed by Leonard, including an embarrassing four straight losses. In the final game, Antetokounmpo was 7-of-18 from the field and 5-of-10 from the free-throw line. If Antetokounmpo can’t get the Bucks to at least the NBA Finals, that will only add to speculation that he will leave as a free agent in the summer of 2021.

Fun times with Zion and Luka

After missing most of the season, Zion Williamson has been as exciting as advertised. The Rookie of the Year candidate is averaging 23.6 points, 6.8 rebounds, 2.2 assists while shooting 58.9 percent from the field in 16 games. More impressively, according to John Schuhmann of NBA.com, Williamson has averaged 20.9 points in the paint per 36 minutes, the highest rate for any player over the past 24 seasons. What should terrify the rest of the league is how Zion spent his downtime. He’s lost 25 pounds of fat while adding 10 pounds of muscle and now looks like Thanos.

Meanwhile, there were rumors that Luka Doncic was out of shape in June. But that was denied by Mark Cuban. Whatever. He looks fine now and is enjoying fishing. Doncic, who turned 21 in February, was enjoying one of the best sophomore seasons we’ve ever seen. He’s already a top-10 player. His player efficiency rating is fourth best in the league (27.75), higher than Kawhi (26.76) and LeBron (26.08). He’s also driving the most efficient offenses we’ve ever seen: an NBA record 115.8 points per 100 possessions.

Dr. Anthony Fauci said that he believes the NBA bubble could work. The players are been tested routinely and strict rules have been enforced. Still, this is a massive undertaking. Even without fans, you’re talking 322 players. If the NBA can successfully pull this off, it will go down as a monumental achievement. If it fails, Silver will look like someone who foolishly risked the safety of others to play games for money.