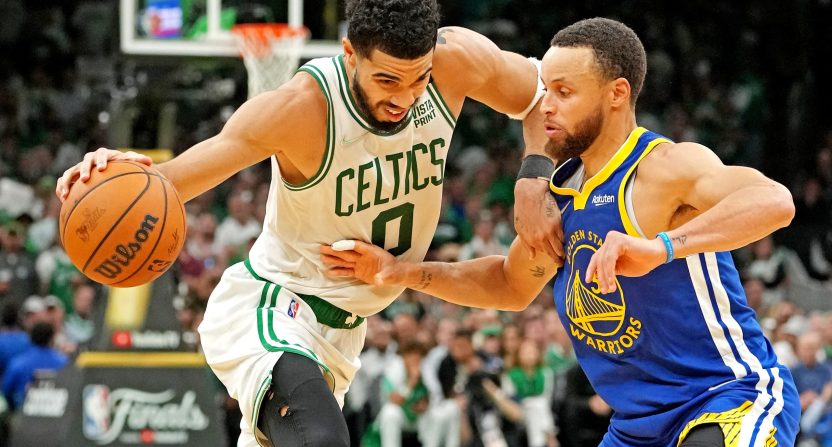 The margins are tight in the NBA Finals. The best of the best are the players who thrive in that environment against defenses geared to stop them, seeking out subtle counters and finding their own looks in spite of it.

Jayson Tatum struggled in his first NBA Finals as his Boston Celtics lost in six games to the Golden State Warriors. He made just 44 of his 120 field goal attempts in the series, shooting a disastrous 31 percent on two-pointers and finishing with a 45 percent effective field goal percentage. He averaged 7.0 assists and 3.8 turnovers per game and in fourth quarters, shot 6-for-25 overall with nine assists and four turnovers.

It was a rough offensive performance. That is not to discount Tatum’s exceptional playoffs overall that helped get the Celtics to the Finals in the first place. In the second round, he scored 46 points in an elimination Game 6 against Milwaukee, and helped lead Boston to a tight series win in the Conference Finals against top-seeded Miami. He was an integral part to Boston’s defense, which deserves to be considered among the best in league history.

But Tatum is a superstar who just came very close to being the best player on a championship team. At 24, he is still figuring out how to navigate games at the absolute highest level as his team’s number one option. That growth is perfectly normal in NBA history; just look at Giannis Antetokounmpo and even Michael Jordan, who took years to win their first championships.

Tatum also just finished a playoffs in which he played heavy, grueling minutes against physical opposition. And that came after a long regular season that followed his participation in last summer’s Olympics. It makes sense that he was fatigued in the Finals.

The Warriors, with their championship pedigree and exceptional defense, exposed Tatum’s flaws and took advantage of them to stall Boston’s offense. It will be on Tatum and co-star Jaylen Brown to identify and work on their weaknesses. The pressure cooker of deep playoff runs requires it.

The most notable point of improvement for Tatum will be running the offense and keeping it smooth and effective. The Celtics knew how to attack Golden State, and would get good looks when they ran the right plays. That is, after all, how they scored 116 points in their Game 3 victory. But too often, they went away from the stuff that worked, attacking unfavorable matchups (like Andrew Wiggins and Draymond Green) and dribbling aimlessly into turnovers.

It always felt like the Celtics controlled their offensive destiny, but failed to consistently make the right decisions. That unpleasant dichotomy, of unfulfilled potential, has led to calls of Boston acquiring a floor-general point guard in the mold of Chris Paul to solve that indecisiveness and waywardness. But who is that player, and how to do they acquire him? Does he compromise the defense, the Celtics’ calling card?

The better solution is internal improvement. The modern positionless NBA does not necessitate true point guards who feed the superstars. It is the superstars themselves who run the offense.

After all, a team’s star usually operates as the primary distributor and ball-handler regardless of his nominal position. That’s the way it is for Antetokounmpo, Luka Dončić, and Jimmy Butler, as well as the primary innovator of this whole concept, LeBron James.

Tatum and Brown will have to grow as initiators of the offense. Marcus Smart can do some of that, but you risk too many shot attempts from Smart when you have him handle the ball in big moments. Ideally, it’s Tatum and Brown who take on that role.

It is the little things that will help them reach a higher level. In the Finals, Tatum struggled to create good shots for his teammates and initiate the ball movement sequences that were a big part of the Celtics’ rise.

NBA stars have two main ways in which they use their dribble penetration and gravity to generate good passes. One is getting off the ball early, passing just as an opponent moves to help on a drive. It has the effect of empowering a teammate and forcing difficult rotations, or an immediate catch-and-shoot look.

Tatum creates a little bit of separation against PJ Tucker in Game 2 of the Conference Finals, and hits Smart as Bam Adebayo moves to help Tucker. Often, this kind of pass is meant to create ball movement sequences, with the recipient of the pass getting into the paint. Chris Paul is a master at creating this.

The other general way that superstars make plays is driving deeper into the paint and passing once the defense has converged. This is naturally harder, as getting into the paint against playoff defenses is not always easy, but it can create great looks. James and Dončić make their living on these plays.

The challenge is that the paint is crowded. Making reads once you’re in a sea of defenders poking at the ball and flailing their arms in the passing lanes is not easy. Having a tight handle and grip on the ball is important, and Tatum and Brown have both had turnover problems in part because they are too loose with their dribble.

Tatum’s struggles distributing the ball stemmed in part from either driving too far into the paint or not driving far enough. Sometimes, he would make an early kickout before disjointing the defense, which would mean that the Celtics couldn’t create any advantage.

Here’s an example from Game 5 of the Finals:

Tatum seemed to think that Al Horford would roll to the hoop here, which would theoretically drag Draymond Green away from Brown. But Wiggins simply switched onto Horford, erasing the need for that help.

The result is that Tatum swings the ball to a smothered Brown. The problem is that Tatum was still standing at the three-point arc when he made the pass, without dribbling around Kevon Looney and drawing help.

Here’s one in which Tatum tries to hit Derrick White on a roll:

White is initially open on the four-on-three chance, but Wiggins retreats to Payton Pritchard in the corner so fast that the advantage is gone. This play could have turned out differently if Tatum had been able to get deeper into the paint against Steph Curry, opening either a lob to Robert Williams III or a kick to Pritchard.

The most important read for Tatum against the Warriors was the skip pass to the strong side corner, which the Warriors always left open in order to provide help to the smaller or weaker defender that Tatum was trying to attack, like Curry and Jordan Poole. In Game 3, the Celtics made a point of looking for it, and Tatum found it:

On one hand, this clip illustrates one of Tatum’s bad habits: rejecting a screen from the player Poole is guarding and choosing to attack Wiggins instead of Poole. But he keeps a live dribble inside the arc and starts the Warriors’ rotations under the rim. Watch Green and Klay Thompson — they’re ready to barricade the paint and box out Williams.

Tatum makes an exceptional pass to Pritchard in the near side corner, taking immediate advantage of the Warriors’ aggressive help.

This was one of the biggest adjustments that helped them win Game 3. But the Warriors’ defense sharpened, and both Tatum and Brown struggled to find a way to take advantage of the Warriors’ set-up. That skip pass is difficult, especially when the defenders are Green or Gary Payton II, who are amazing at making rapid close-outs to take away any advantage.

Tatum made this pass in Game 5, hitting Grant Williams in the corner and creating a dunk for Williams III:

The reason that the Warriors’ defense was so successful, however, is that this pass is very difficult. Only a couple of NBA players can make it consistently. And note here that even when Tatum managed to bypass all of those defenders, Green still closed out on Williams and the Warriors rotated immediately.

This is the set-up Tatum is looking at:

Payton II is standing in the paint, helping way off of Grant Williams. The Warriors basically dared Tatum to hit the wide open Williams and dart a pass over the heads of almost everyone on the court. Curry is ready to battle on the perimeter, and if Tatum gets by him, he has Payton II and Green waiting for him.

The crowded paint too often caused Tatum to throw the ball away. He struggled to find his own looks, too, as his midrange game was basically erased by this defensive set-up. His finishing at the rim was bad all series. His contested floaters and layups simply were not going in, with Wiggins and Green doing an excellent job of forcing misses. The Warriors forced him to drive left, where he especially struggled.

Tatum had trouble overcoming that. His offensive game was stunted, and he couldn’t find the solution to Golden State’s system.

Some blame can also go to the Celtics’ offense as a whole. When they ran more creative plays, such as off-ball screens to generate switches, they made things a little bit easier for Tatum and Brown. The key was getting them on the move, so they didn’t have to create all the advantages by themselves against a set defense. Screen-the-screener actions worked, as did this type of double-drag screen:

Ime Udoka could have done a better job of implementing more creative plays.

But at this point in the season, the opposition is prepared for everything. It’s on Tatum and Brown to find counters in the moment.

As mentioned, Tatum is still just 24, and he’s had a ton of playoff experience already. He developed a lot as a playmaker this past season, and his growth in that area was a big reason for the Celtics’ run. He’ll learn from this experience against an NBA dynasty. His play next season, when the Celtics will presumably be top contenders again, will be fascinating.