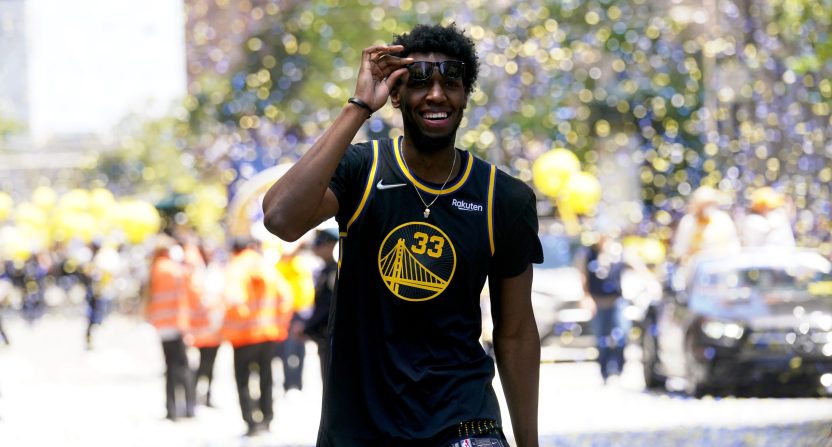 We know this about James Wiseman: the Golden State Warriors have been a better team without him. Now, that’s a little unfair because it’s a relatively small sample size. Wiseman is young and has been hurt. Still, the numbers are hard to ignore.

Two seasons ago, the Warriors were 18-21 when he played and 21-12 without him. This past season, Golden State won it all as Wiseman missed the entire year with a knee injury. All this makes you wonder about the seven-footer’s long-term future.

Golden State has talented youngsters. Jordan Poole, Jonathan Kuminga, Moses Moody, and Wiseman are all under the age of 24. The Warriors probably know the least about Wiseman, 21, because they haven’t seen enough of him.

James Wiseman provided an update on his rehab and said there is a "90 percent chance" he plays in the upcoming Summer League pic.twitter.com/uh8DwGPURi

Wiseman was the top recruit in the country in 2019 and the second overall pick in the 2020 NBA Draft. But he hasn’t played a full season of basketball since high school. At Memphis, he appeared in only three college games due to a shoulder injury, NCAA eligibility issues, and his decision to forgo the rest of his freshman season to focus on the draft.

When the Warriors picked him, expectations were high. Now, they’re more measured. The 2022-23 season will be extremely important. Is Wiseman a star who has just been snakebit by unfortunate injuries? Or is he too brittle to hold up throughout an NBA season and a poor fit for the Warriors’ offense?

The Summer League might help provide some clarity. Wiseman said there’s a “90 percent chance” he will participate next month.

“I’ve been feeling great,” Wiseman told NBC Sports Bay Area. “I’m running now. I’m doing a lot of up-and-down stuff. I’m really doing a lot of regular stuff now. Just trying to get in shape and make sure everything is good in terms of my knee.”

James Wiseman provided an update on his rehab and said there is a "90 percent chance" he plays in the upcoming Summer League pic.twitter.com/uh8DwGPURi

You could argue that no player needs the Summer League more. The scouting report on him entering the draft was that he would immediately be a rim protector and electric finisher with his terrifying 7-6 wingspan. If his offense developed, he could become the next superstar frontcourt player. His rookie season yielded mixed results. He averaged 11.5 points and 5.8 rebounds while shooting 51.9 percent. Solid numbers for a first-year player. However, he appeared in only 39 games due to a torn meniscus.

Golden State was hoping to fully assimilate Wiseman into their system this year. Because the Warriors got off to an 18-2 start, they had the luxury of not rushing him. But he was unavailable again due to injury. Looking to the future, there are two possibilities with Wiseman: keep him or trade him. It seems like the organization is leaning toward the former. The Warriors are expected to pick up his option for the 2023-24 season.

According to Heavy.com’s Sean Deveney, an unnamed NBA executive told him that the Warriors will not deal the seven-footer.

“It comes down to stubbornness,” the anonymous source said. “They were not shopping him, they were not taking offers on him, if you called they shut it down.”

Regardless of what Golden State decides, everyone needs to see what a healthy Wiseman can do. As a rookie, he struggled to fit into a Warriors offense (60 turnovers to 26 assists) that relies on shooters and ball movement. With Steph Curry, Klay Thompson, and Poole, they have plenty of long-distance threats to spread the floor. Wiseman, once he understands the system better, could give the Warriors a different look, especially on defense. They have been an average shot-blocking team in recent years. Last season, they finished 17th (4.6 per game). In 2020-21, Wiseman finished fourth on the team in total blocked shots (36) despite limited action.

Golden State didn’t need height to win four championships. That makes you wonder about Wiseman. He’s the biggest mystery for a franchise known for “small ball.”