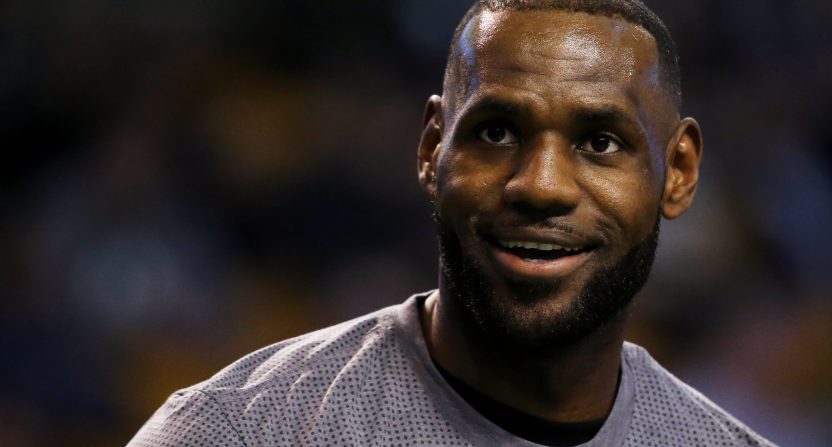 You’ve read the stories, now see the movie! LeBron James stars in The Expendables 4, coming this fall to an NBA arena near you. Parental discretion is advised.

LeBron has assembled the most ragtag bunch of mercurial personalities. The Los Angeles Lakers, one of the most storied and respectable franchises in sports history, could play a Bizarro World lineup that includes Rajon Rondo, Lance Stephenson, JaVale McGee and Michael Beasley.

We know one of the reasons LeBron went to L.A. was to become involved in the entertainment business. This foursome should be quite entertaining. It’s so comical, so full of outcasts that some people called it “The Expendables” – a reference to the ensemble action franchise led by Sylvester Stallone. In the movie, a random group of soldiers of fortune unite to take down the bad guys. They were supposed to fail, but of course, they triumph.

LeBron seems to be creating the basketball version of The Expendables. They’re all on one-year contracts as the Lakers wait for next of-season when they can go after Kawhi Leonard and make a legitimate run at the two-two defending champion Golden State Warriors.

In the meanwhile, the Lakers are a Metta World Peace signing away from picking up 15 flagrant fouls before the season even starts. Could we fire Luke Walton and install Ozzie Guillén as the coach?

All of this has left us wondering:  what would a LeBron James Expendables movie look like?

Here is our best guess. Cue the trailer!

(The following preview has been approved for appropriate audiences by the Motion Picture Association of America.).

Voiceover: They are basketball’s silliest mercenaries. The only life they have ever known is buffoonery. The only loyalty they’ve had is to each other.

LeBron: “The only thing you need to know is that the job is real and the money is real.”

Voiceover: A job no one wanted is becoming a mission they never expected.

Rondo: “Golden State has a small army. What do we got? Four and a half men.”

Beasley: “That’s not so funny.”

LeBron, after Stephenson almost decapitates him with an errant pass: “Are you crazy? You could’ve killed me.”

*Rock music plays with the lyrics “Every one of us is expendable!”*

McGee, turning slyly to the camera: “You got a problem with that?

Trailer ends with the title: The LeBron James Expendables: You want to get nuts? Let’s get nuts.

In a world where the greatest basketball player of all time keeps losing in the NBA Finals, there’s only one thing left to do. LeBron has gone Hollywood. After multiple failed attempts to beat Golden State’s evil empire, he has decided on an unconventional route. He’s teaming up with the zaniest assortment of characters to prove he can get to the NBA Finals with anybody. A group of castoffs, troublemakers, and also-rans will try to take down the Warriors.

When Golden State sees these guys, they’re going to…

Well, to be perfectly honest, Stephen Curry and Kevin Durant are going to laugh so hard that they might hyperventilate. Advantage: LeBron.

They’re going to be so distracted by the absurdity of it all that Draymond Green might accidentally kick one of his one teammates in the junk. Advantage: LeBron.

McGee is going to be so excited that he’s going to throw down a vicious putback dunk… in his own basket. Advantage: Golden State.

Looks like Space Jam 2 isn't the only time LeBron will team up with the Looney Toons.

Weaknesses: Outside shooting and people skills

Rondo is a math wiz, a basketball genius and physical freak. He’s got the hands of an extraterrsial. Among this motley fool foursome, he’s the lone guy who was a starter for an NBA championship team, winning with the Boston Celtics in 2008. He also has some anger management issues.

Rondo reportedly threw a water bottle at video screen after an unflattering critique of his play. He also clashed with Dallas Mavericks coach Rick Carlisle. This past year, however, Rondo rebuilt his reputation in New Orleans.

Rondo is a weird dude. But he’s an unusually effective talent. You have to be to play a decade as a career 30.9 percent 3-point shooter.

Stephenson seems like the modern day Ron Artest. Both were drafted lower than their talent warranted. Both starred for the Indiana Pacers. Both seem dangerously unstable. Stephenson made a name for himself by repeatedly trying to get underneath LeBron’s skin. The most famous incident of him blowing in the ear of LeBron is a meme. There was also this ridiculous flop.

Look Stephenson can be a handy player but do you really trust a guy who’s willing to slap himself in the face? Even though they are on the same team, LeBron still probably will have to deal with Lance’shenanigans.

Strengths: He can score (On a per minute basis, better than Carmelo Anthony last year).

Weaknesses: Prone to be distracted by SpongeBob

Beasley is one of the most confounding players in recent NBA history. The dude has skills. He was the No. 2 overall pick of the 2008 NBA draft – ahead of Russell Westbrook and Kevin Love. But he’s never put it together.

He once wore a watch on his ankle during a TV interview. He once had a SpongeBob SquarePants shower curtain, bath mat and toothbrush. All jokes aside, he’s battled some personal demons. The one thing Beasley has going for him is a previous relationship with LeBron. The two were teammates when James was with the Heat.

Weaknesses: Most potential to pull a J.R. Smith and not know the score.

When JaVale McGee was in Denver, coach George Karl said: “Lazy and crazy isn’t going to make it work.”

Of all the players, McGee is probably the most likely to do something foolish to cost you a game.

He could run the wrong way. Or he could clumsily knock down one of his own teammates. You never know. Golden State managed to get the most out McGee. He posted career-highs in true shooting percentage.

LeBron’s mission, should he choose to accept it (Yeah, I know that’s a different action movie franchise): make winners out of one of the most preposterous rosters in NBA history.

To do so, will LeBron have to: