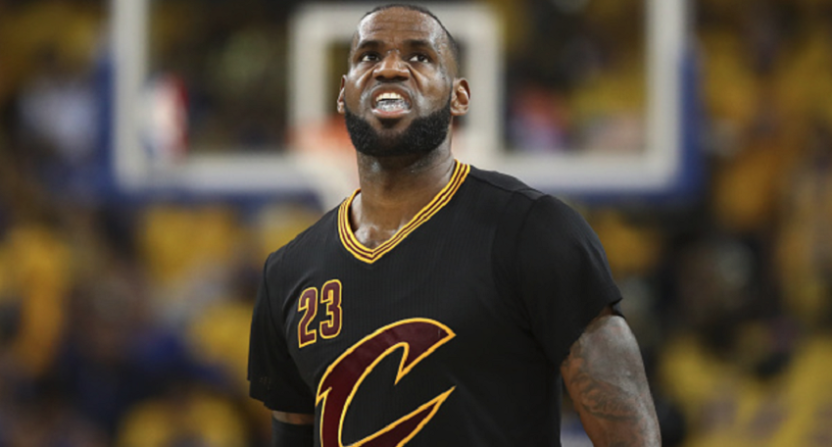 Let’s try to look into the mind of LeBron James, shall we?

What was going through his head as he walked off the Oracle Arena court after a dispiriting 129-120 loss in Game 5 of the NBA Finals on Monday, with yellow confetti falling as the Golden State Warriors celebrated their second championship in three years — both at James’ expense — on their home floor?

Was LeBron James angry? Sad? Frustrated? Distraught? Despondent? Helpless after the Warriors’ superteam woke up in the second half on Monday and overwhelmed the Cavaliers’ defense with peerless shotmaking and their trademark frenetic pace while the home crowd went berserk?

What more could LeBron have done?

All he did was average a triple-double for the series and make history by becoming the first player in an entire playoff series with the most points, rebounds, assists, steals and blocks. Cleveland had to put on a record-setting performance just to take a single game in this series and keep its championship hopes alive. The Cavs’ masterful performance in Friday night’s Game 4, where they scored 49 points in the first quarter, 86 by halftime and set a record by hitting 23 3-pointers in a Finals game, was completely unsustainable.

As he begins his offseason, James will look back at Game 3, when Cleveland went scoreless over the last 3:09, surrendering an 11-0 Warriors run and a late six-point lead. That defeat will probably haunt LeBron and the Cavs for months, possibly years. Will LeBron see only disappointment in that loss, or a hopeful solace, in a sense?

Cleveland hung with Golden State, a team numerous pundits are calling one of the great teams of all time, at home in Game 3, won by 21 in Game 4 and fought valiantly in Game 5 in Oakland, only to succumb to the Warriors’ immense talent. But over the course of the five games, it became clear that James just didn’t have enough help. Cleveland became overmatched and overwhelmed during the brief moments when LeBron was on the bench, its inferior depth exposed.

Maybe LeBron James thinks this Cavaliers core as it’s currently constituted can dethrone the Warriors next season. Or perhaps James had the same mindset Draymond Green had after last year’s Game 7 in the same arena as he exited the court: Let’s get another superstar like Kevin Durant, let’s take our team to the next level.

Unlike the Warriors, who were able to sign Durant in an offseason where the salary cap spiked — because of the new television contract — to a level we’ve never seen before, getting another superstar to Cleveland wouldn’t be easy if James and company elected to take that route.

The fact that James wields managerial influence in Cleveland isn’t exactly the best-kept secret in the world. It’s probably not a coincidence that Cleveland general manager David Griffin was linked to GM openings in Orlando and Atlanta before ultimately staying with the team when those jobs were filled by John Hammond and Travis Schlenk, respectively. If LeBron really wanted major change done to this Cavs team, he’d likely have a large say in that happening.

The problem is that for real change to occur with this team — to try to get on Golden State’s level — the core of this club would have to change, perhaps drastically, and that may not be financially viable. Only Portland has more money guaranteed to players on the books than Cleveland, and the Blazers are reportedly dangling first-round picks to get out from under some of their large contracts. The Cavs have over $125 million in guaranteed salaries not just next season, when the salary cap is expected to be $101 or $102 million, but for the 2018-19 season as well.

Kevin Love, Kyrie Irving, Tristan Thompson and J.R. Smith will make a combined $71.67 million next season and $76.4 million the year after that, per HoopsHype. So a combination of those players would have to be traded for Cleveland to improve, unless owner Dan Gilbert is willing to pay a historically astronomical sum in luxury tax fees.

Assuming James wants to keep Irving around, and Thompson and Smith aren’t exactly the most enticing trade chips given their above-market salaries and less-than-ideal contracts, dealing Love would be the team’s most likely option if the Cavs want to change things up this summer.

Though Love averaged a double-double, 16 points and 11.2 rebounds, in The Finals, he scored a combined 15 points in Cleveland’s losses in Games 3 and 5 and shot 38.8 percent from the field against Golden State. That’s not going to cut it in any Finals series, and especially not against these Warriors.

So when LeBron was walking out of the arena Monday night, was he thinking about how his team would look with someone else in their starting lineup instead of Love, just like Draymond Green envisioned a Warriors lineup with Kevin Durant instead of Harrison Barnes?

Would LeBron have thought of a trade for Indiana’s Paul George? What about revisiting an old trade rumor and sending Love to the Knicks as part of a Carmelo Anthony deal, teaming up with his old pal who’s fallen out of favor with Phil Jackson in New York?

Maybe LeBron let his imagination run wild. Chicago wouldn’t trade Jimmy Butler within its own division, would it? What about clearing some cap space for Blake Griffin, who’s a free agent? Hell, Chris Paul and Kevin Durant will be free agents, too, though Irving would likely have to go to make room for CP3.

Or do James and the Cavs stick with their core while trying to improve their bench depth, perhaps with younger players. Golden State was able to win while developing a young player like Patrick McCaw, who showed flashes of potential on Monday night, indicating that he could be a core rotational component in future Warriors squads.

LeBron James’ greatest nemesis, his largest, most imposing and most fearsome obstacle in building on his championship legacy is this Golden State Warriors team. And it doesn’t seem like the Warriors are stepping aside anytime soon. What does LeBron James plan to do to combat that?

Only LeBron knows, and what he thought about as he exited Oracle Arena in defeat and what he’ll think about as the defeat eats at him over the summer months will help determine how the Cleveland Cavaliers look next season and beyond.