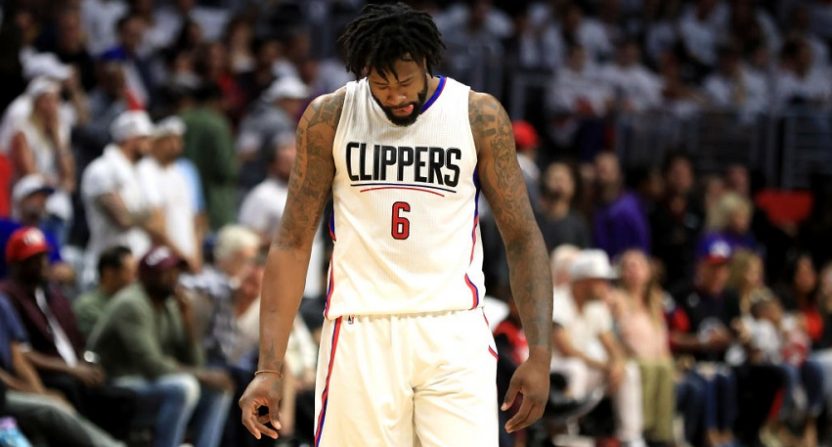 The result was both predictable and shocking at the same time. What happens next for the Los Angeles Clippers will be incredibly fascinating.

In Game 7 of its first-round series at home, the Los Angeles Clippers laid an egg in a 104-93 loss to the Utah Jazz. The defeat is yet another disappointment in a long run of them for a franchise with a core group of four players — Chris Paul, Blake Griffin, DeAndre Jordan and J.J. Redick — as talented as any in the league. The long-term future of three of those four players, along with head coach and team president Doc Rivers, is now in immediate question.

So what will the L.A. Clippers look like in three months from now?

Paul, Griffin and Redick will all be unrestricted free agents on July 1, just two months from today, and after all this team has been through over the past few years, perhaps Rivers doesn’t want to do this any longer.

But before we look at the Clippers’ future, we need to examine its tortured, tormented past.

We’re now in the golden age of Clippers basketball, yet every season has ended prematurely, in disappointment caused — in one way or another — by seemingly haunted misfortune.

Los Angeles hasn’t missed the playoffs since it acquired Paul after a CP3 trade to the Lakers was vetoed by then-commissioner David Stern in the lockout-shortened 2011-12 season, yet the Clippers still have never reached the conference finals.

The first two seasons of the Paul-Griffin era were coached by Vinny Del Negro, who won a playoff series in the 2011-12 season over Memphis before being swept by San Antonio. Del Negro was fired in favor of Rivers after the 2012-13 season, after L.A. lost to the Grizzlies in the first round. Enter Rivers.

That 2013-14 season was when Jordan began dominating on offense as well as defense, averaging double figures in scoring for the first time while pulling down 13.6 rebounds per game. Redick provided a fourth option for L.A. after being acquired via trade in the previous offseason from Milwaukee. Then the Donald Sterling scandal emerged, ending with a sale of the team to current owner Steve Ballmer.

The Sterling saga was all going on, if you’ll recall, in the middle of the playoffs and was a distraction never seen before in the history of the NBA. After defeating Golden State, who the team had developed a rivalry with, the Clippers ultimately had too much going on and fell to Oklahoma City in the second round.

The 2014-15 season was the year that really seemed like the Clippers would get over the hump into the conference finals. Paul hit a dagger jumper in the closing seconds of Game 7 to defeat the Spurs in the first round. That appeared to be the turning point for the franchise in the first full season with stable ownership in place and a core group destined to be a title contender for several more years.

Then came the epic collapse against Houston in the second round, when L.A. blew a 3-1 series lead in disastrous fashion. The Rockets seemingly threw in the towel after going down by 19 points in Game 6, but the Houston bench delivered a massive comeback to win that game by 12 before coming back to take Game 7.

Terribly timed injuries felled the Clippers in the last two postseasons. In the first round of the 2015-16 playoffs against Portland, L.A. took a 2-0 series lead before losing Paul and Griffin to season-ending injuries in Game 4 — the same game! — and lost the series to the Blazers in six. This season, the Clippers won just 51 games — their lowest total in the Paul-Griffin-Jordan era — and lost Griffin to yet another season-ending injury in the seven-game loss to Utah.

With that history in mind, where do the Clippers go from here? If Rivers remains with the team, and there are no real indicators as of now that he won’t, blowing the team up and beginning a rebuild seems out of the question. The only reason Rivers left Boston to Los Angeles via trade in the first place is because he didn’t want to be part of a Celtics rebuild.

Despite its immense talent in its top four, Doc Rivers’ inability as an executive to give the teams he coached enough depth has proved costly as the team continues to fall short of a deep postseason run. As part of an NBA collective bargaining agreement, incumbent teams can offer its free agent players more money to stay than other teams could in trying to pry those players away.

Paul turns 32 on Saturday, so this may be the last time he can sign a super-max contract while he’s still in his prime. Griffin is also going to get the full max, and there have been no signs that he wants to leave Los Angeles. After being severely underpaid in his last contract, only making $7.3 million this past season, Redick is going to get a gigantic raise from someone in the offseason. With Jordan’s contract expiring after the 2017-18 season, when someone will give him a max contract, there almost certainly won’t be room for L.A. to pay both Redick and Jordan the money they’ll get on the open market.

So do the Clippers try to bring the band back together and pay a hefty luxury tax? Paul and Griffin probably want as much money as possible, but will they stay with Los Angeles or exit via a sign-and-trade? Will L.A. revisit trade talks with the New York Knicks regarding Carmelo Anthony? Knicks Team President Phil Jackson made it clear that he wants Anthony — who has a full no-trade clause — gone during the offseason, and dealing ‘Melo to Los Angeles makes a lot of sense.

Assuming Paul, Griffin and role players Luc Mbah a Moute and Marreese Speights decline their player options, the Clippers will only have Jordan, Austin Rivers, Jamal Crawford, Wes Johnson, Brice Johnson and Diamond Stone under contract for next season. What the Clippers decide to do between now and the beginning of July could change the structure of a franchise in its golden age.

Will this Clippers group of Paul, Griffin, Jordan and Redick ultimately be defined by disappointment, or will the roster as currently constituted get yet another opportunity next season to finally exorcise its cruel and merciless demons?