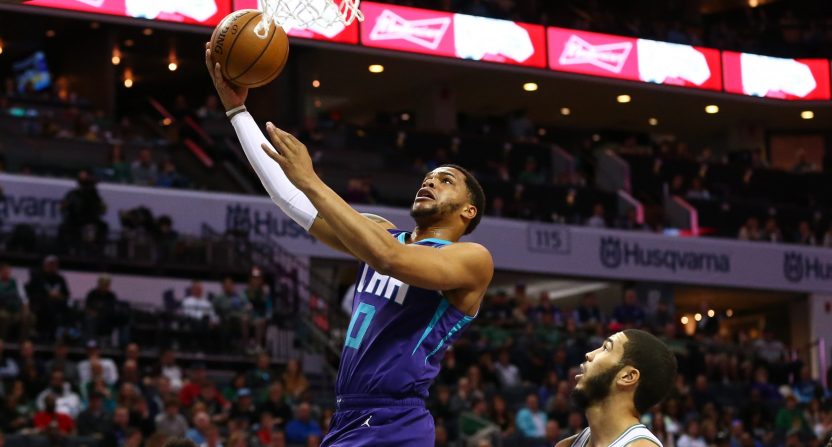 The NBA All-Star Game is next month, and the starters have been announced. But what about the Not-All Stars?

For the second straight year, The Comeback has assembled the worst starting lineup in the NBA. We used an objective metric in our analysis: real plus-minus. Real plus-minus gauges the impact of a player on his team’s net efficiency (points scored minus points allowed- per 100 possessions). It also adjusts for teammates and opponents.

The following players have the worst real plus-minus ratings at their positions, according to ESPN.

Ed Davis won a national championship in college with North Carolina in 2009. He was a lottery pick – 13th overall to the Toronto Raptors in 2010. While he has never developed in to an All-Star, he’s enjoyed a solid career. Davis has played for six teams and signed as a free agent with Utah in the offseason. The Jazz expected him to contribute with rebounding and hustle points, after Davis averaged a career-best 8.6 rebounds per game and shot a career-best 61.6 percent for Brooklyn last season.

But Davis, who has a two-year contract, has been a colossal disappointment. He’s averaging career lows in points (1.3), rebounds (4.0), shooting percentage (37.5), and free throw attempts (0.5). Davis lacks offensive skills, so his low scoring output isn’t a surprise. What’s startling is that he hasn’t been very good defensively either.

The Kristaps Porzingis trade could eventually go down as one of the worst deals in New York Knicks history. Porzingis, who forced his way out of New York, has been a key part of the Dallas Mavericks resurgence. In return, New York got Dennis Smith Jr., who has been a lousy player on a lousy team. Yes, Smith is still only 22 years old, and has dealt with injuries (back and oblique) and the death of his stepmother. But Smith is clearly regressing. His real plus-minus is the fifth worst in the league.

Smith (5.0 ppg, 2.6 apg) is averaging career lows in every major statistical category. Last season, he was third on the team in scoring (14.7) and led Knicks in assists (5.4). Now, he can’t even beat out Elfrid Payton and Frank Ntilikina for minutes. Smith was the ninth overall pick of the 2017 draft and looked like a future star. There is a possibility that New York might give up on Smith. If he’s traded, he’ll be on his third team in two seasons.

Anfernee Simons is best known for being drafted from high school, avoiding the league’s age-restriction policy. He became eligible for the 2018 draft by spending a postgraduate year – technically a fifth year of high school – at IMG Academy in Bradenton, Florida. He originally planned to attend the University of Louisville, but decommitted when then-coach Rick Pitino was put on administrative leave in 2017 and then later fired due to the FBI investigation.

That loophole allowed him to be selected 24th overall in the 2018 draft by Portland. The Trailblazers sent him to the developmental league for most of 2018-19. He made his NBA debut last year, playing 20 games. This season, Simons has endured on the job training, shooting 40.2 percent with only four starts. This month has been particularly brutal with him shooting just 34.5 percent. But Simons has raw talent. His speed led Portland star Damian Lillard to say “His potential is crazy.”

Kind of feel bad for singling out Anthony Tolliver, who has the second worst real plus-minus in the NBA. His career has already exceeded expectations. The 34-year-old is the quintennial journeyman. The former Creighton star went undrafted in 2007 and spent time in the developmental league and played overseas.  Since then, he has played for nine NBA teams. That’s perseverance. Tolliver started out this season in Portland before being trading last week to the Sacramento Kings in a multi-player deal.

Tolliver has been a role player for most of his career, but he did start nine games with Portland. He hasn’t averaged in double figures scoring since 2009-10 with Golden State (12.3), and is a career 41.6 shooter (although he shoots 37.3 from 3-point range). While his offensive number are poor, Tolliver has carved out one distinctive skill. According to http://fivethirtyeight.com/, he is adept at taking charges.

You can make an argument that Miles Bridges is the NBA’s worst player. His real plus-minus is – by far – the lowest in the league. Charlotte has been dramatically better without him. Bridges has a staggeringly bad on-court/off-court net rating of minus-14.9.

Bridges was one of the bigger stars in college basketball. The 2017 Big Ten Freshman of the Year surprised many when he returned to Michigan State for his sophomore season. The Spartans were No. 2 in the preseason poll but failed to get past the first week of the tournament and Bridges left for the NBA. He was drafted No. 12 overall by the Los Angeles Clippers and then immediately traded to the Charlotte Hornets.

In his second season, despite a higher usage rate and higher scoring average, Bridges has been worse. His turnover rate has increased, and his rebounding rate is lower. To make matters worse, Bridges moved to small forward this season to accommodate rookie power forward PJ Washington. Washington has fared well, but Bridges has struggled. At least, he’s a terrific dunker.