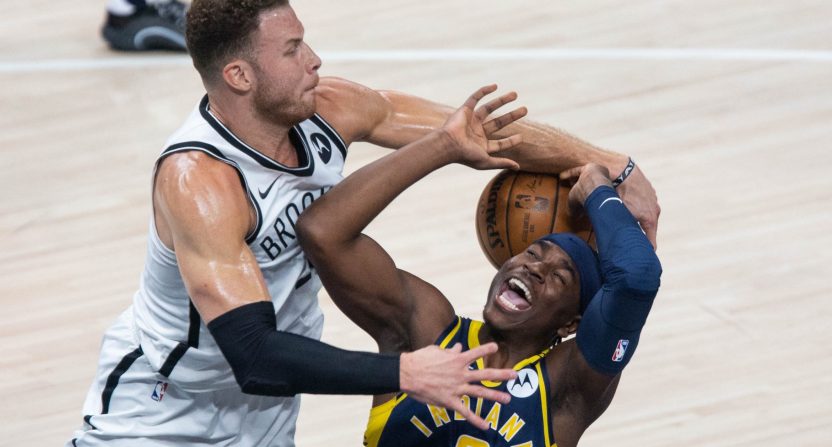 The Indiana Pacers lost to the Brooklyn Nets last night.

If that went under your radar, it’s understandable; the first round of the NFL Draft likely took precedence. Or maybe you weren’t that interested in watching two injury-ravaged teams playing a random weeknight game in late April. James Harden and Kyrie Irving were out for Brooklyn, and while the star power wasn’t matched on the Indiana injury report (a tough battle to win) the Pacers were without Myles Turner and Domantas Sabonis, among others.

Partway through the game, Malcolm Brogdon left with an injury as well.

That the Nets ended up winning 130-113, on the strength of Kevin Durant’s consummate superstar performance (42 points on 16-24 from the floor, adding 10 assists) and the weakness of Indiana’s defense without their top three centers. (Third big man Goga Bitadze was also out.)

The Nets are Eastern conference favorites, so their win isn’t that surprising. But the Pacers…well, they’re something else entirely. Indiana has built a franchise identity out of consistently competing, eschewing tanking and bottoming out in the middle of the East, with a ceiling of “almost beating LeBron James teams only to lose in heartbreaking fashion.”

In the last ten seasons, the Pacers have made the playoffs nine times. Their only miss was a close call in 2014-15, the season that then-star Paul George mostly missed after his horrific leg injury. They haven’t picked higher than tenth in the draft since 1989. Every year they seem to grind out regular seasons of competence, no matter what their playoff talent might look like.

The last two seasons have seen injuries to top players in the postseason, leading to sweeps in the first round that probably reflected their talent. In 2018 they should have beaten LeBron’s Cavs, losing in seven games and demonstrating they were probably one of the top teams in the conference in the process.

So, this year, with a new coach in Nate Bjorkgren, the Pacers have…taken a huge step back? As things stand now, Indiana sits ninth in the East. They’re not likely to slip below tenth thanks to the Bulls myriad issues, meaning they’re fairly assured of at least a play-in round appearance. But what the hell happened to the team that was the model of a sustainable high-floor approach?

In short, and most optimistically for Pacers fans: injuries.

T.J. Warren has missed all but four games this season. He emerged as one of Indiana’s best players for most of last season, exploding in the bubble. Warren’s absence was compounded by Victor Oladipo’s in-and-out availability and effectiveness to start the year. When he was dealt for Caris LeVert, LeVert promptly missed a long stretch of time after surgery for kidney cancer. He’s been intermittently himself since returning (including a solid “revenge” game against the Nets last night, going for 36 points) but he clearly hasn’t been the best version of himself.

Myles Turner and Domantas Sabonis have both been out for long stretches, especially late in the year. For a team built to play with two centers on the floor to suddenly have none at all, it’s a tough adjustment. Turner anchors the Pacers defense, while the offense plays through Sabonis.

With both players out, it’s been a makeshift approach; last night midseason ten-day addition/revelation Oshae Brissett started alongside JaKarr Sampson up front, with Edmond Sumner starting at the three. That’s a frontline full of players who wouldn’t start for many playoff teams individually, much less all at once.

That the Pacers have managed to hang on despite being down one core piece all season and typically two or more for any random game has been sort of impressive on its own, and that level of health concern probably means Bjorkgren and team president Kevin Pritchard probably don’t have any kind of job pressure incoming.

That’s despite the fact that Pritchard essentially ran it back from last year, or attempted to, punting on the decision to break up the Turner-Sabonis pairing, while also moving on from stalwart coach Nate McMillan (currently leading the Hawks on an interim basis.)

The coaching move was certainly defensible; reports made it clear he’d lost the locker room, and a new voice was needed. Whether Bjorkgren proves the right voice, though, remains to be seen. Pritchard also passed on an offseason of possible roster changes, an interesting tactic considering the Pacers were far from a perfect roster last year.

The Oladipo-LeVert switch was admittedly a solid bit of business, and helps make up for that lost time. But there are still some huge organizational questions heading into this summer, which could see the Pacers missing the playoffs proper for the first time in five years. It could, if things go very wrong in the remaining few weeks, even see Indiana picking in the top ten for the first time in more than 30 years.

It’s a pivotal offseason, then, because languishing in the netherworld of “not competing/not picking near the top of the draft” is a death sentence for a midmarket team like Indiana. They’ve avoided it by punching above their weight, building teams based around depth and cohesion to offset their inability to be a free agent destination, but their efforts to zig enough to compete in a zagging league might finally be pointless.

That could mean trading any number of pieces, though likely at least one center would have to be moved (it should be noted that Indiana was willing to do this last fall for a Gordon Hayward sign-and-trade, though the Celtics eventually decided that Tristan Thompson and losing Hayward for nothing was better than adding Turner and Doug McDermott. (Whoops.)

In the end, though, perhaps most harmfully, the Pacers didn’t get any real looks at what their talent can be together on the court. That’s not ideal, but front offices don’t always have that luxury, and executives make a lot of money to visualize what might work and what definitely won’t work. Running this team back isn’t impossible; most of the roster is under contract, after all. But that would seem like treading water for two years when at the very least they could have made some progress towards shore.