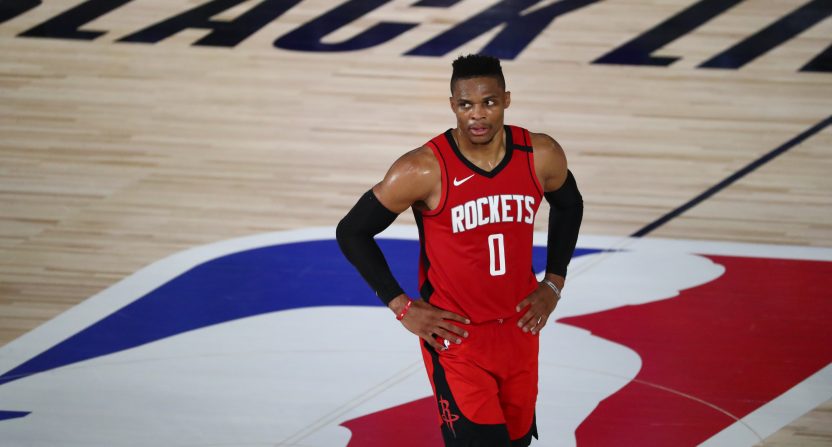 Russell Westbrook requested a trade from the Houston Rockets on Wednesday, more than a year after the Rockets acquired him in exchange for Chris Paul and four(!) first-round picks from the Oklahoma City Thunder (two of those picks are protected swaps). Houston is in a tough short-term spot, and an even tougher long-term spot.

Westbrook owns one of the worst contracts in the league. He makes over $40 million through 2021-22, and owns a $47 million player option for 2022-23. He made third-team All-NBA in the regular season, but managed this only after he found offensive competence in a radical system designed to accommodate him. His shooting is catastrophic, and his 31-year-old body will only lose the athleticism that has defined his career.

The Rockets realized in the middle of last season that the bricky Westbrook couldn’t survive in a lineup with a traditional non-shooting center like Clint Capela. So, they traded Capela midseason and went full small-ball. Westbrook stopped shooting threes and found success attacking the lane in spaced half-court set-ups. It was clear, though, that the success was fleeting, and small-ball had a ceiling. Harden and Westbrook — while good friends — operated a clunky, take-turns offense, and relied heavily on PJ Tucker to save them on defense.

The playoffs, of course, didn’t go well. They barely escaped Paul’s Thunder in the first round, and the bigger Lakers feasted in the second round, with Westbrook struggling mightily. Affected by a couple of lingering injuries and perhaps the COVID-19 case that he contracted during the shutdown, he scored only 17 points per game on poor efficiency. Houston got wrecked without Harden on the floor. The Lakers chose not to defend Westbrook on the perimeter, severely impairing the Rockets’ offense.

While Westbrook may not have been at 100% in the bubble, this playoff failure was only the latest in a series of them since Kevin Durant left Oklahoma City.

The Rockets’ task now is finding a landing spot for him. This trade request is probably for the better: it forces Houston to make a necessary move. A Harden-Westbrook duo is going nowhere.

While there have been rumors concerning a potential Harden trade, Shams Charania reported that Harden is content to run it back in Houston, even with coach Mike D’Antoni gone. The Rockets should put the best talent they have around Harden without further sabotaging their future, and see how far they can get. Harden guarantees playoffs and some level of contention.

At some point, it seems likely that Houston will trade him. In theory, they could pull the trigger on that blockbuster as soon as this month, if they don’t see a point in playing another year with their MVP. If an offer blows them away (Ben Simmons? Jaylen Brown? Michael Porter Jr.?), they should consider it. But Harden wants to stay, and with new coach Stephen Silas, it would be worth it to build around Harden for now.

The question, then, is whether there is a market for Westbrook. His contract will (or at least should) turn away some potential suitors. For most teams, absorbing Westbrook’s deal would mean losing a chance at the major players in the 2021 free agent class. He’s also an unideal co-star, given his atrocious shooting and lack of qualities that make up for it.

There should be a place for him, though, and many teams have been rumored to be in the running. He should net value for the Rockets, in some fashion, though it won’t come close to recouping what they lost in the original Paul-Westbrook swap. (That deal has proven awful in hindsight for Houston.) Let’s evaluate the teams that could be interested in Westbrook:

There’s a case that one of these places — all of them dreary, all of them trying to develop young players — would be the best pure basketball fit for Westbrook. He would have another chance to be the guy on offense and do what he does best: lift up a team going nowhere. They may not make the playoffs, but Westbrook would make them competitive on a night-to-night basis.

I’m not sure why any of these teams would jump at the chance to take on an expensive long-term Westbrook contract, though. They’re far from contention and Westbrook isn’t getting them there now. The Pistons, if they’re so inclined, could swap Blake Griffin and a pick for Westbrook. The Hornets have cap space, so they could dump Nicolas Batum’s contract and help Houston clear cap space. There’s no obvious reason to do that, though, unless Michael Jordan is unreasonably anxious to acquire a star.

The Knicks would add a ball-dominant non-shooter to a team of developing young guys who can’t shoot. That does not seem like a good idea. But this is the Knicks, so you never know.

Something about Westbrook in Memphis feels intriguing. They have the salary to match, in Gorgui Dieng, Kyle Anderson, and Tyus Jones. And they’re a young team that could use a jolt of talent to help compete in the cutthroat Western Conference. They have a shooting big man in Jaren Jackson Jr., and they’re not in a position to make a deep playoff run, so it’s not Westbrook’s anemic three-point shooting that would kill their chances at a championship.

But as with every team, Westbrook’s contract hurts their long-term flexibility. Jonas Valencunas starts games and plays real minutes, and it’s not clear that Westbrook can survive next to a dinosaur big. Morant needs driving lanes, and Westbrook only clogs them. Houston may not be impressed with Memphis’s offer, either.

Orlando and Indiana feel more plausible. They are teams that are either close to wandering in the wilderness (Pacers) or in full wandering mode (Magic). Westbrook would help either team stick around in the playoffs. Would Houston be interested in Aaron Gordon? He may be the best possible player they could get for Westbrook, depending what the Clippers are thinking (more on that in a second).

Phoenix, also rumored to be in the Paul conversation, could offer Ricky Rubio and Kelly Oubre Jr. Westbrook would help push Devin Booker into the playoffs. But if they can get Paul, they should by all means do that rather than acquiring Westbrook.

The Clippers are the team that has been linked to Westbrook most frequently. Let’s be clear on this point: the Clippers trading for Westbrook would be an absurd decision. They’re one of the most urgently win-now teams in the league, and Westbrook’s failures in the playoffs are well-documented. It’s not clear how the presence of Westbrook would help the Kawhi Leonard-Paul George offense find a more consistent rhythm than it did in 2019-20.

Most costly, though, is the package that would have to give up in order to acquire him. To match salary, barring some complex three-team deal, they would have to part ways with Lou Williams, Patrick Beverley, Ivica Zubac, and Rodney McGruder. There’s no scenario in which that’s an upgrade.

The Lakers actually make slightly more basketball sense, though I’m still skeptical. LeBron James and Anthony Davis create so much offense that a non-shooter like Westbrook wouldn’t hamper the offense too much. (We all did just watch them start Alex Caruso in Game 6 of the Finals, and win.) Westbrook would give them a secondary creator next to LeBron, keeping the ship afloat when LeBron rests and allowing LeBron to play off the ball, the way Rajon Rondo did. Westbrook would also be a dynamo in transition.

But I’m not sure how taking the ball out of LeBron’s hands and putting it in Westbrook’s is a desirable outcome. In addition, it’s not clear how they would figure the salaries out. Danny Green’s outgoing contract wouldn’t be enough to match Westbrook’s massive deal. With that in mind, the Lakers should probably sit this one out and stay on the prowl for easier LeBron-AD complements.

The Heat are here because they’re always looking for a star and could match salary without trading necessary players. But they’re in the hunt for free agents next summer, and adding Westbrook to Jimmy Butler and Bam Adebayo only cramps their half-court offense further.

There are no obvious Westbrook fits. An unexpected team (the Pelicans with Jrue Holiday, for some reason? Another rebuilder?) could make a play for him. The best role for Westbrook would be as a floor-raiser on a lower-tier playoff team that is content with simply playing into late April and May. The Rockets should be happy with almost any offer that relieves their cap and gives them a draft pick. Westbrook will get a shot somewhere.