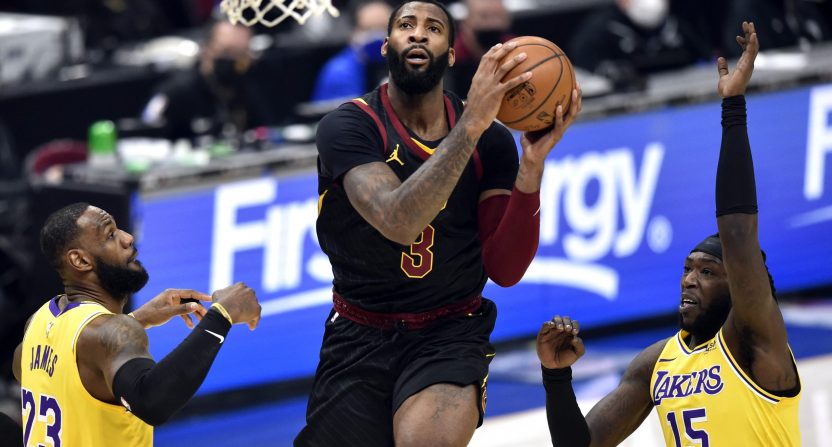 The Cleveland Cavaliers and center Andre Drummond agreed to a buyout on Thursday, one day after the NBA trade deadline came and went. Drummond’s exit from Cleveland has been a matter of when, not if; he hasn’t played since Feb. 12, with the rebuilding Cavs opting to give young big man Jarrett Allen more playing time. Drummond — who was under contract for $28.7 million this season — averaged 17.5 points, 13.5 rebounds, and a 20.8 Player Efficiency rating for Cleveland in the 2020-21 campaign.

Drummond now enters the buyout market, and it’s rare that players with numbers like Drummond has put up end up available after the trade deadline has passed. The two-time All-Star is a highly attractive potential addition for a number of teams, and is capable of making a massive impact (especially for teams in need of frontcourt and rebounding help).

So, which team is it going to be? According to Chris Haynes of Yahoo! Sports, Drummond “will listen to pitches” from the Los Angeles Lakers, Los Angeles Clippers, Boston Celtics, New York Knicks, and Charlotte Hornets.

Assuming those are indeed the teams in the running, let’s take a look at potential fits:

The defending champion Lakers make a whole lot of sense for Drummond right now, especially with superstars LeBron James and Anthony Davis likely still out for weeks. The Lakers currently sit fourth in the Western Conference at 28-17, but they’ve lost four straight games, and there’s only a 4.5-game separation between them and the No. 8 seed San Antonio Spurs (and only a 1.5-game gap between the Lakers and No. 6 and No. 7 seeds – the Denver Nuggets and Portland Trail Blazers).

Drummond would give the Lakers a pretty reliable, consistent presence to help them win games right now (something that has all of a sudden gotten pretty important), and he’ll just add more firepower to make this a more dangerous team when LeBron and A.D. return. A healthy Lakers team with this frontcourt and depth would be a total nightmare to face in the playoffs. And they would offer Drummond’s best chance to win a championship. The 27-year-old hasn’t won a ring yet, so the realistic opportunity to win a title likely means a lot to him.

Marc Stein of the New York Times reports that the Lakers “have made signing Drummond their priority after a fruitless trade deadline.”

The Lakers have made signing Drummond their priority after a fruitless trade deadline, but the competition is fierce and Boston can also offer the sort of role Drummond seeks.@ChrisBHaynes reported that Drummond will also field pitches from the Knicks, Clippers and Hornets.

Additionally, Brad Turner of the Los Angeles Times reports that the Lakers “appear to be front runners to land the center, sources said.”

With André Drummond getting buyout from Cleveland, the Lakers appear to be front runners to land the center, sources said. But the Lakers have competition from other teams.

Five Thirty Eight actually gives the Clippers the highest NBA title odds at 23%, but the same model projects the Lakers for just 6%, and we know that’s comically low. So, that’s hard to take seriously. But the Clippers are legitimately good, with the potential to be great. Many evaluators (raises hand) thought they were the team to beat last postseason, and then they were knocked out in the second round (blowing a 3-1 series lead to the Denver Nuggets).

Maybe Drummond is buying in on the Clippers’ potential, led by two stars in Kawhi Leonard and Paul George. However, it’s also not the best roster fit for Drummond, with Ivica Zubac and Serge Ibaka already in place.

On the surface, it’s hard to see why Drummond would choose the Clippers over the Lakers, for example.

It’s been a really disappointing season for Boston, who enters Friday night’s game against the Milwaukee Bucks with a 21-23 record (eighth in the Eastern Conference). But they have too much talent to remain this bad (or so you’d think). Jayson Tatum, Jaylen Brown, and Kemba
Walker give Brad Stevens’ squad a ton of scoring talent, particularly around the perimeter. It’s the frontcourt where they could really use an upgrade, and especially with starting center Daniel Theis being traded to the Chicago Bulls on Thursday.

If Drummond believes the Celtics will start playing closer to their true talent level (especially if he’s part of things), this is a spot that makes a lot of sense. And there are plenty of reports suggesting that Boston would really, really like to acquire Drummond.

Adam Himmelsbach of the Boston Globe tweets, “According to sources, the Celtics also made a serious run at Magic center Nikola Vucevic yesterday. Now, Boston is expected to shift its focus toward Andre Drummond.”

New: According to sources, the Celtics also made a serious run at Magic center Nikola Vucevic yesterday. Now, Boston is expected to shift its focus toward Andre Drummond. More: https://t.co/2d0XByNmHy

Additionally, Marc Stein reports that the Celtics “have emerged as a contender to watch” for Drummond.

The Celtics have emerged as a contender to watch in the race to sign soon-to-be free agent Andre Drummond, league sources say.

Cleveland announced its buyout with Drummond this afternoon. pic.twitter.com/R2d89LovmU

And ESPN’s Adrian Wojnarowski — as relayed by Yahoo! Sports’ Keith Smith — says that the Celtics “met with Andre Drummond” on Friday, and that Boston “has a real shot at him.”

Per Woj on ESPN: "The Celtics met with Andre Drummond today. Boston would like to add him to fill their hole in the middle. Boston has a real shot at him."

Now we get to the teams that are extreme longshot title contenders, but are having surprisingly good seasons. Led by power forward/point guard-esque facilitator Julis Randle, the Knicks have been a rather shocking 23-22, which currently places them fifth in the East. But with Drummond, perhaps the Knicks could keep winning a fair amount of games and even be competitive in a playoff series.

The biggest thing the Knicks can offer, though, is money. Perhaps the ability to offer a legitimate, multi-year deal will work in their favor here.

I keep hearing about the Knicks connection to Drummond. They have $15 million in cap space and could give Drummond a multi-year deal. 3 years, $45 million, for instance. https://t.co/CYSyY7w5tg

Supposedly there’s talks about Andre Drummond to the Knicks and being extended for 4-years/$64 million. Thoughts?

Like the Knicks, the Hornets are one game over .500 (22-21)in the East, but perhaps in unsustainable fashion- especially with the loss of LaMelo Ball to a season-ending fractured wrist. The general appeal of the Hornets would also seem to rank last of the remaining teams (unless Drummond just really wants to play for a Michael Jordan-run organization).

And Hornets general manager Mitch Kupchak admitted on Friday that the Hornets signing Drummond or another impact player on the buyout market is a “long shot.”

Add everything up on paper, and the Lakers and Celtics would seem to be the favorites. Then consider that the reports are suggesting as much, and it would really seem likely that Drummond will end up on the Lakers or Celtics.

The pick here? The Lakers. Drummond would have a great shot at his first ring if he joins LeBron and A.D., he can really make a meaningful impact (especially while James and Davis are out), and it’s an excellent opportunity to really show the basketball world what he can do after annually being on bad teams with the Cavs and Detroit Pistons.

UPDATE: Andre Drummond is indeed expected to sign with the Lakers.

Once Andre Drummond clears waivers at 5 PM ET, he intends to sign with the Lakers, his agent Jeff Schwartz of @excelbasketball tells ESPN.

Lakers have been informed that André Drummond will sign with them as soon as he clears waivers today. Drummond hopes to attend Lakers game tonight vs. Orlando, sources said.