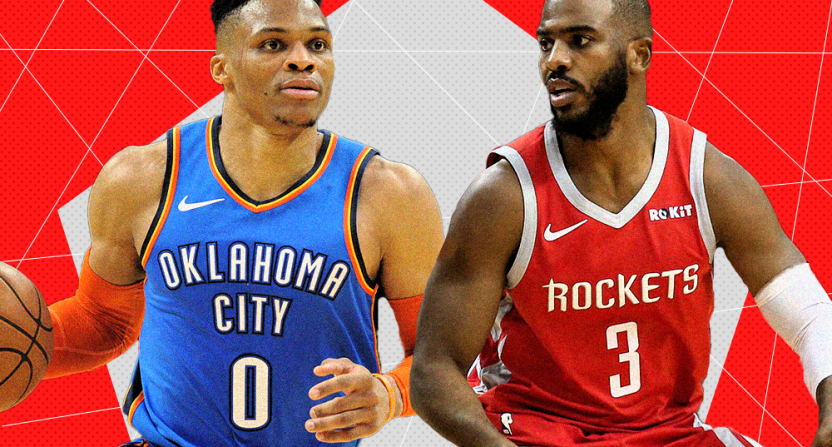 For some NBA teams, making the playoffs and getting bounced earlier than expected is a tough blow with serious implications. Ousted NBA playoff teams have to quickly transition their mindset into the future of their franchises and face plenty of tough questions about the future of their team. For some, that picture looks pretty bright, but for others, it’s dimmer. Four teams that have already been eliminated this postseason have some serious challenges ahead of them.

The Rockets’ organization is run by some of the smartest people in basketball, has perennial MVP candidate James Harden under contract for the foreseeable future, and has been the biggest challenger to the championship-winning Golden State Warriors for three years running. However, Houston’s cap situation is a looming problem that will need to be addressed sooner than later.

The Rockets’ biggest problem is the contract of point guard Chris Paul. The 34-year-old is coming off a largely disappointing postseason, averaging 17.0 points, 5.5 assists and 6.4 rebounds per game, on 44.6 percent shooting from the field and 27 percent shooting from three. On the surface, those numbers might seem fine, but Paul is the Rockets’ highest-paid player and is owed more than $120 million over the next three seasons. Paul is clearly on the decline as he reaches his mid-30s, and his effectiveness is already starting to wane. The contract is unmovable and an anchor to a contending team desperate for cap space.

With Paul and Harden taking up more than half of the Rockets overall cap space, the club’s depth has not been properly addressed. Snagging guys like Kenneth Faried and Austin Rivers on one-year fliers is smart, but none of those players can make enough of an impact to help the Rockets take the next step. At this point, Houston is stuck with what they have: A very good team that is not good enough to take down the Warriors. GM Daryl Morey will have to be creative to avoid another half decade of this.

The Detroit Pistons have made some progress in the last year to go from mediocre basketball team to okay basketball team in the last calendar year after bringing in head coach Dwane Casey from the Raptors and giving executive Ed Stefanski full control of basketball operations. Despite the recent headway, the Pistons are expensive, do not have much in terms of good young building blocks, and are stuck in basketball purgatory, where they are too good to get a lottery pick, but not good enough to be considered contenders.

The Pistons’ roster is built around flawed star players. Center Andre Drummond remains a league-best rebounder, but his lack of outside shooting and mobility make for an outdated skill set. Former first-overall pick Blake Griffin, meanwhile, enjoyed a nice season where he averaged 24.5 points and 36.2 percent shooting from three, but is still a huge health risk and missed two of four playoff games. Outside their big two, the roster features a handful of solid role players with little building blocks.

With salary commitments of nearly $100 million to Griffin, Drummond, Reggie Jackson, Jon Leuer, and Langston Galloway, Detroit has little flexibility to improve their core and will most likely be bringing in more vets on one-year deals to supplement any losses. The Pistons desperately need to hit on their first-round pick and give fans a glimpse of a brighter future.

The Boston Celtics were in an enviable situation just a couple seasons ago, as GM Danny Ainge did a masterful job of collecting future assets and swinging smart trades to keep the current roster competitive. After landing Kyrie Irving and using back-to-back lottery picks to snag California alumnus Jaylen Brown and Duke’s Jayson Tatum, the Celtics appeared to be heading for years of contention.

Unfortunately for Boston, the Celtics cratered in 2018-19. After widely being predicted as a top team in the East, Boston won just 49 games and fell to a quick loss in the NBA Eastern Conference semifinals, losing to the Milwaukee Bucks in five games. Neither Brown nor Tatum took the expected next step towards stardom, Gordon Hayward never really found his game after missing an entire season of basketball, and drama took over the club. Irving seemed to change his mind about guaranteeing to stick around, players fought over court time, and fingers were pointed in every direction.

This offseason, the Celtics face the possibility of losing Irving for nothing and have some tough decisions ahead of them when it comes to where they want to go next as a franchise. Losing Irving would be devastating. With four potential first-round picks (none likely to be in the top ten), Boston could usher in a rebuild or use those assets to try to get back to a top team in the East. Whatever happens, change is coming.

The Thunder are in a somewhat similar situation to the Rockets, albeit with less success since Kevin Durant joined the Warriors. Oklahoma City has been bounced in the first round of the playoffs in three straight seasons and questions have understandably come up regarding Russell Westbrook and his effectiveness to lead the team.

Westbrook is an uber-athletic point guard who has wowed the NBA by averaging a triple-double in the regular season for three straight seasons. However, in the playoffs, the 2017 NBA MVP has turtled. In three consecutive playoff series, he has underperformed dramatically. His usage was way too high for shooting percentages that never passed 40 percent over a full series. Westbrook tries to do way too much instead of ceding some responsibility to his teammates. With Paul George surpassing him as the best player on the team, Westbrook needs to be less selfish on the court. The 30-year-old sneakily has one of the worst contracts in the NBA as he’s owed over $40 million until 2022-23. If Westbrook slows down or gets injured, that contract goes from really bad to full-blown albatross.

George is still really good, but Thunder management needs to somehow bring in supplemental young talent or cap space to turn OKC’s fortunes around without making major changes. Otherwise, the organization will be stuck in the mud and top out as a good-not-great team until they blow up the core.