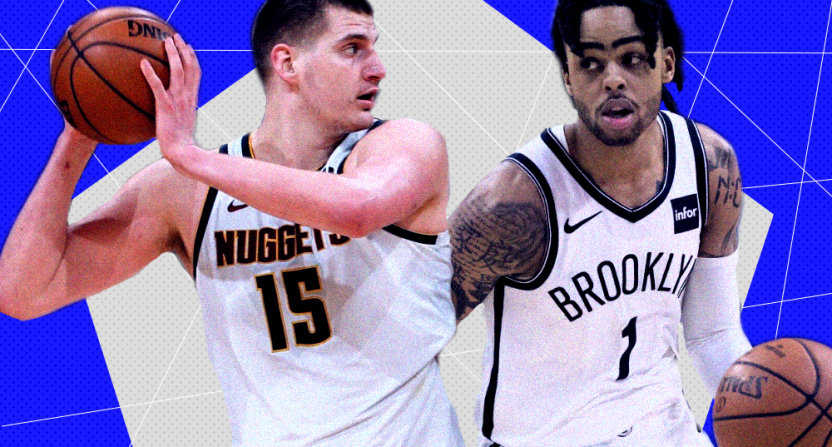 Qualifying for the playoffs only to get eliminated early on is a tough blow for any NBA team. For some franchises, the failure to have deeper NBA playoff runs leads to some serious questions about the future of the team and amplifies what needs to change going forward. However, for some eliminated teams, their future still looks bright despite an early postseason exit.

Denver has its franchise player in center Nikola Jokic. The seven-footer might not look like a traditional star player, but he contributes a ton on the court. Jokic possesses a plus basketball IQ. He can score in a variety of ways, is a tremendous passer for a big man and is a top-tier rebounder. In his first-ever postseason, Jokic upped his game to new standards, averaging a ridiculous 25.1 points, 13.0 rebounds, and 8.4 assists per game. At 24, he has still got room to grow.

The Nuggets’ roster beyond Jokic is a well-constructed mix of good young talent and impact veterans. They have drafted and developed starters Gary Harris and Jamal Murray, as well as key bench options Malik Beasley and Monte Morris. Bringing in Paul Millsap and Mason Plumlee, along with Will Barton and Torrey Craig has given Denver a plethora of lineup combinations and options. Next season, the Nuggets will also get top prospect Michael Porter Jr., who missed the entire season after undergoing back surgery, back in the fold. They will have largely a returning group that excelled all season long.

Financially, the Nuggets have Jokic locked up for the foreseeable future and don’t have any major rotation pieces hitting free agency. Depending on what the team does with Millsap’s $30 million player option, they may have some flexibility going forward. But sticking with their current roster and counting on continuity could be their best play. Being smart in the draft and free agency has set the Nuggets up beautifully for next season and beyond.

The Sixers’ season ended in dramatic fashion after an excruciating Game 7 loss to the Toronto Raptors, but that does not negate the organization’s bright future, regardless of how this summer plays out.

Joel Embiid and Ben Simmons are both great building blocks for the future of the franchise, and they both now have multiple seasons of NBA experience under their belts. Embiid is a top-ten player in the league, while Simmons’ unique skill set makes him a matchup nightmare. However, Philadelphia is set to have a majority of its roster hit free agency, including stars Tobias Harris and Jimmy Butler as well as J.J. Redick. As it stands now, the Sixers have just around $48 million in potential payroll commitments entering next season. Obviously, re-signing Butler and potentially Harris will be the focus of allocating open cap space, but the Sixers have plenty of options to build around Simmons and Embiid.

GM Elton Brand will have a lot on his plate in order to build a competitive roster, but he has got a great foundation, plenty of cap space and even a first-round draft pick to work with. Fans in Philadelphia should not hang their heads long about the tough playoff exit. Things are not as dire as they seem.

The Nets had about as good of a season as possible after making the playoffs and seeing huge developmental gains from D’Angelo Russell, Caris LeVert and Spencer Dinwiddie. Their five-game loss to the Sixers stung, but now that GM Sean Marks has built a competent roster, he can finally dip into the free agent market in a big way. After eventually working out a new contract for Russell, Brooklyn has the cap space to bring in some big names around their core. The Nets should be chasing the likes of Kyrie Irving and Kevin Durant. Even if they do not land a big name, the organization has learned from past mistakes and established themselves as a team worthy of at least getting a meeting.

The Nets should be a playoff team next season, and they’re built to continue to at least be competitive for the next few years. Depending on what Marks does with his cap space, Brooklyn could be fast-tracked into Eastern Conference contenders. By taking risks on seemingly-damaged players, absorbing salary for draft pick considerations, and making the right picks in the draft, the Nets have turned an untenable situation into a prosperous one.

Unlike their Los Angeles counterpart, the Clippers have been extremely smart in teambuilding and have an exciting offseason ahead of them despite their first-round loss to the Golden State Warriors.

Despite being playoff contenders, Los Angeles did not try to disguise their true intentions of grabbing assets and shedding salary to build a brighter future. They traded Harris to the Sixers in a deal that brought back two first-round picks, including Miami’s unprotected 2021 selection, along with starting guard Landry Shamet. The organization smartly brought in center Ivica Zubac from the Lakers for Mike Muscala. They also traded shooting guard Avery Bradley and his $12 million salary next season for two rotation players, JaMychal Green and Garrett Temple, both of whom are set to be UFAs. Making moves with the future in mind in the middle of a playoff run is always risky, but for the Clippers, it was the perfect strategy for a continually disappointing team.

Danilo Gallinari, Lou Williams, and Montrezl Harrell, the team’s three highest-impact vets, are all set to return next season. Meanwhile, the Clippers are set to shed a ton of salary. The team will surely chase Durant, Irving and Kawhi Leonard. Unlike the crosstown Lakers, they have an enviable, stable situation to showcase to potential big name free agents. With a slew of young talent, cap space, and future draft picks, the Clippers have overcome cap hell to become the best team in L.A. both now and going forward.