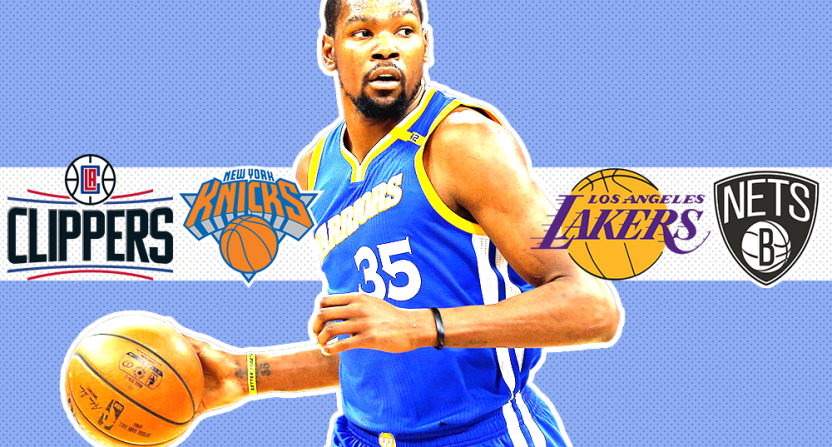 After two seasons with the Golden State Warriors, superstar forward Kevin Durant is set to become an unrestricted free agent at the conclusion of the 2018-19 NBA playoffs. His free agent status has been a hot-button topic around the NBA, and there has been plenty of speculation to where the former MVP might go next. With a bevy of potential landing spots, which team would need him the most? Five teams come to mind.

While Durant’s legacy will always be tied to joining Golden State after losing to them in 2015-16, he has done his best to shake the bandwagon narrative to emerge as the league’s best player. There is no question Durant’s tenure with the Warriors has been an overwhelming success. In two seasons, he has put up gaudy numbers, led Golden State to back-to-back championships and been named NBA Finals MVP both times.

Despite all the winning and championships, retaining Durant does not seem to be in the cards for the Warriors. There have been season-long rumors the two parties will split after the conclusion of this season, and that’s okay. Durant will leave Golden State with three potential championships. He does not need to justify any more why he teamed up with Steph Curry, Klay Thompson, and Draymond Green, just like he does not need to justify leaving. The Warriors would love to keep Durant if they could as it would be a boost to their future fortunes, but they would still be a championship contender without him—even if they are better with him. Among the five teams on this list, the Warriors need Durant the least.

No team in the NBA has done so much so quickly to turn around their seemingly desolate future to become a viable free agent option for Durant. GM Sean Marks has worked hard to completely rebuild the Nets by being creative and taking on salary while hitting on his few draft picks to build a team that earned a surprise playoff this season. He conquered an uphill battle and has positioned the Nets to make noise. But the one thing Brooklyn currently lacks is a true superstar, and Durant would fit that mold perfectly.

Unlike when he joined the Warriors, Durant signing with the Nets would help propel a good team into a great team. The Nets have a strong core of good young players in D’Angelo Russell, Jarrett Allen, and Caris LaVert. Adding Durant would make Brooklyn immediate championship contenders in a huge market. The Nets would be a good choice for Durant’s personal brand and legacy.

Like the Nets, the Clippers have done a masterful job at bringing in future assets while remaining competitive. Los Angeles has the necessary cap space to bring in Durant and possibly one more max contract. They also have enough attractive building blocks to be quite an appealing destination.

The Clippers made the correct call to move on from Blake Griffin last season and have been wise with their ensuing moves. Dealing Tobias Harris to the 76ers for two future first-round picks and a package that included starter Landry Shamet was one of the best moves any team made all season. It cleared cap space and gave Los Angeles first round picks they can either use to draft and develop more young talent or use in a future trade to bring another star. Shamet and Shai Gilgeous-Alexander are an intriguing backcourt, and throwing Durant in the mix would make the Clippers fun as hell.

The Clippers are an extremely attractive option for Durant and have the cap space to do some interesting things in free agency. Getting a star of Durant’s caliber would make them the team to follow in Los Angeles.

The Lakers have nobody to blame but themselves for not being more of a player in the Durant sweepstakes. Despite having a handful of talented young players in Lonzo Ball, Brandon Ingram, Kyle Kuzma and Josh Hart, and having LeBron James under contract until at least 2020-21, the organization has worked against itself in potentially landing KD.

This summer has been a huge mess for the Lakers and it has barely started. Magic Johnson abruptly resigned his position as team president, while calling out current general manager Rob Pelinka. L.A. seemed to grab a solid coach in Frank Vogel, but immediately undermined him by hiring Jason Kidd as an assistant. Why would Durant want to join another superstar in LeBron and enter an ongoing dramafest?

The Lakers would obviously love to land Durant. Pairing him alongside James and potentially Anthony Davis would be tantalizing. However, Durant has much better options elsewhere. Plus, he would be better off being the unquestioned best player for a team in need of a star. It seems he wants to rewrite his legacy. Joining the Lakers would not accomplish that goal. However, they do need him more desperately than some of these other teams would.

Despite the Knicks and James Dolan getting in their own way consistently, the organization has been linked to Durant all year and it would make perfect sense for the superstar to come to the Big Apple.

Durant would create a seismic shift for New York’s future. The Knicks stink. They finished with 17 wins and the worst record in the NBA after tanking the season for Zion Williamson (and ultimately coming up short on landing the top pick). Coach David Fizdale did not have a competitive roster on a nightly basis and was forced to start players that would not belong in any good team’s rotation.

Still, New York set themselves up to be huge players in free agency. Dealing young star Kristaps Porzingis to the Dallas Mavericks for cap space was somewhat head-scratching, but the deal moved enough money for Durant and another big-time free agent to enter the fold. Like Durant, Kyrie Irving has been linked to the Knicks all season. Bringing in a superstar in Durant and an all-star point guard in Irving would give New York a championship-caliber team for the first time in decades. All of the cards are lined up for the Knicks to make it happen;. But they can’t mess this up; if they don’t sign Durant and/or Irving, the club’s future will remain in limbo. So they perhaps need Durant more than anyone else here.