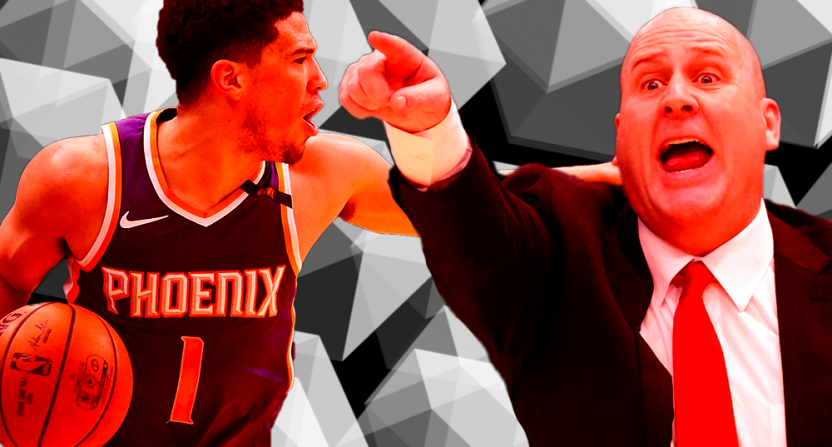 It’s been a strong, balanced season for NBA teams in the playoff hunt as both the Eastern and Western Conference have produced multiple, legitimate NBA title contenders. On the flip side, teams at the bottom of the standings in each conference are already out of the race and are playing largely meaningless basketball. There are five teams who’ve been particularly bad in 2018-19, but which team is truly the worst in the NBA?

Atlanta isn’t a good basketball team, but among the five teams on this list, they’re in the best shape in the long haul.

With 18 wins in 56 games, a -7.2 point differential, and the worst defense in the NBA, the Hawks are heading towards another season in the lottery. The Hawks weren’t supposed to be good and wanted to finish as close as they can to the bottom of the standings, so, mission accomplished. They’ve ridden a youth movement all season, starting two rookies in point guard Trae Young and shooting guard Kevin Heurter. While Young is a promising offensive talent, he’s one of the worst defenders in the NBA. As a team, the Hawks lead the league (by a wide margin) with 18.4 turnovers per game and are dead last with an obscene 118.5 points allowed per game. With Young and forward John Collins, Hawks games aren’t completely worth avoiding, however.

The Hawks’ struggles can be attributed to inexperience and a lack of depth – both of which were expected issues entering the season. The rebuild isn’t doomed, but this season was over as nearly as quick as it began.

Somehow, the Bulls managed to make a position of weakness even weaker when they fired coach Fred Hoiberg and replaced him with Jim Boylen. Drama and bad performance followed Boylen. On any given night, the Bulls look aimless. Boylen’s offense is atrocious despite having some talented scorers in Zach LaVine and Lauri Markanen. Chicago ranks in or near the bottom of the league per game in points (102.3, 28th), three-pointers made (9.4, 28th), offensive rebounding (8.2, 30th) rebounds (42.1, 26th), assists (12.9, 27th) and turnovers (14.7, 21st). The team is joyless to watch – even after adding Otto Porter Jr. in the trade deadline. They shoot a lot of bad shots and can’t defend at all.

There’s not a lot the Bulls do well as a team. They’ve got some building blocks going forward, but until they find a new GM and coach who know what they are doing, the rebuild is never going to get off the ground.

Once LeBron decided to leave for Los Angeles, the Cavaliers rebuild was on. With a depleted, expensive roster, nobody expected Cleveland to make the playoffs this year. And guess what? They’re not going to.

Featuring an ever-changing roster, the Cavs are the lowest-scoring team in the Eastern Conference. Point guard Collin Sexton has shown a knack as a scorer but is a below-average playmaker. Cleveland averages the second-fewest assists per game in the Association with just 20.4. The ball doesn’t move and they don’t have the shotmakers to make up for it.

With injuries to veteran forwards Tristan Thompson and Kevin Love, the Cavs have used lineups that G-League teams could hang with. Starters Ceddy Osman, David Nwaba or Larry Nance Jr., shouldn’t be starting for any NBA team. When Osman – who barely got off the bench for James last season – is your most consistent starter, you’ve got big problems.  As a whole, the Cavs’ -10.6 point differential is the worst in the league.

Cleveland will continue to plug recently acquired guys into the lineup in order to finish the season with the worst record possible. They need to pray to the ping pong ball gods they get a top-three pick, otherwise, next season is going to be as hopeless as this one.

David Fizdale’s first season in New York has gone mostly as planned, even if it seems disastrous. The team has lost a TON of games and younger players have been given big opportunities to work on their game. The Knicks simply aren’t talented enough to compete in the league. As soon as Kristaps Porzingis went down with an injury, the team had to use below-replacement level talent instead. Fizdale has used 18 different starters already, with a good chunk of them – like forward Kevin Knox, shooting guard Alzono Trier, small forward Mario Hezojna, center Mitchell Robinson, point guard Frank Ntilikina and power forward Noah Vonleh – being young and inexperienced.

The Knicks are tanking with a purpose. Outside of Knox and recently acquired point guard Dennis Smith Jr., there’s not much building to do this season. Losing and landing Duke’s Zion Williamson to pair with a big-time free agent like Kevin Durant and Kyrie Irving is what’s on the Knicks minds. For now, New York is comfortable losing with bad players taking up big minutes. They’re terrible and will be lucky to win five more games this season – but it’s all part of the bigger picture.

The Suns are in the midst of their ninth consecutive season of missing the playoffs and only have themselves to blame for a failed rebuild. Despite the promise of center DeAndre Ayton, All-Star shooting guard Devin Booker and small forward Mikal Bridges, Phoenix wouldn’t be in this position if they hadn’t whiffed big time in the 2016 draft, using three first-round picks to take power forwards Dragan Bender (who regularly registers DNP’s) and Marquesse Chriss (who’s on his third team in two years). Mixed with 2017 first-rounder Josh Jackson underperforming, the Suns’ rebuild has hit rock bottom.

It’s hard to run an offense without a playmaker. Lacking a true starting point guard, the Suns have relied on 2018 second-round picks De’Anthony Melton and Ellie Oboko to run the point – neither of whom are ready to log major minutes in the NBA. Booker has taken on even more responsibility to lead the Suns and it’s clear he’s doing too much. The Suns have the second-worst offense and worst defense in the Western Conference. They routinely get blown out while making plays where Yakety Sax would be playing in the background.

The Suns lack a direction and as a group, don’t have much of a bright future either. This team wasn’t built to be this bad, yet here we are. Thankfully, they own their first-round draft pick this season and for years to come. Hopefully, they learn from their mistakes and don’t squander them.

The Suns are the worst team in the NBA.