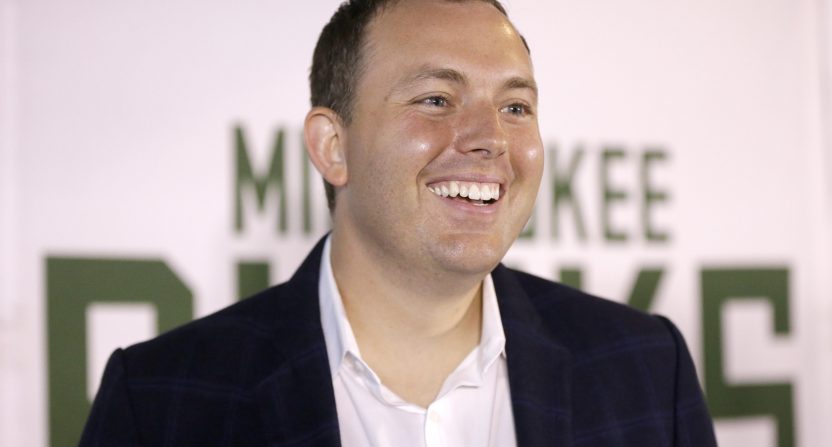 In 2018, Rockets GM Daryl Morey captured the NBA Executive of the Year award after assembling a powerhouse Houston Rockets team that fell just one win short of the NBA Finals. In 2019, there are plenty of worthy candidates for the award in a deep field of talented execs. There five names in particular deserve consideration for the award.

Ujiri had himself one heck of an offseason, trading shooting guard DeMar DeRozan to the San Antonio Spurs in a package for superstar forward Kawhi Leonard and shooting guard Danny Green. In value alone, the swap greatly benefited the Raptors. Getting a top 10 player in the league in Leonard for a good player whose impact peaked in Toronto was simultaneously shocking and exciting.

Toronto currently sits second in the East at 48-20 with a roster comprised of talented homegrown players (Pascal Siakam, Fred VanVleet, Norm Powell, and OG Anunoby) and impact veterans (Kyle Lowry, Serge Ibaka, Green, and Leonard). Ujiri further bolstered the roster bringing in center Marc Gasol, point guard Jeremy Lin and shooting guard Patrick McCaw before the deadline for a serious playoff push. He has assembled a top tier roster that can evolve based on how the postseason plays out. If they don’t make a deep playoff run, transitioning to a rebuild will be relatively easy. However, Ujiri is hoping this version the Raptors can do what other Raps squads couldn’t do: win it all. He has given them the best chance in franchise history to do so.

Connelly replaced Ujiri as Nuggets Team President when the latter left for Canada in 2013. Since taking over, Connelly has turned a mediocre team into one of the best in the Western Conference.

Connelly has expertly used the draft to land some seriously talented players to build his roster around. The crown jewel of those drafting efforts is former second-round pick Nikola Jokic, who has morphed into an MVP candidate in just his fourth full season. Outside of center Mason Plumlee and power forward Paul Millsap, Connelly has constructed Denver’s rotation with shrewd drafting. He has hit on lottery picks (shooting guard Jamal Murray), scored talent in the second round (point guard Monte Morris), and brought in other rotation players via free agency (small forward Torrey Craig). The Nuggets are good now and will very good for the foreseeable future thanks to Connelly.

When Marks joined the Nets organization as general manager back in 2016, he entered one of the toughest jobs any rookie GM has ever had. Brooklyn lacked talent on its roster and didn’t have many future draft picks thanks to a previous incompetent regime. Marks got creative and somehow assembled a playoff team in three years.

Marks acquired draft picks by taking on unwanted contracts and selling off the few players with value. He took on Timofey Mozgov in order to get D’Angelo Russell from the Lakers, shooting guard DeMarre Carroll in order to get a first-round pick (Dzanan Musa) from the Raptors, and Kenneth Faried in order to get a 2019 first round pick from the Nuggets. Meanwhile, he continually hit on draft picks and found gold in unwanted guys, with guards Spencer Dinwiddie and Joe Harris turning into key contributors after failing to hold onto jobs elsewhere. The Nets are 36-34 are set to make the playoffs. Nobody has done more with less than Marks.

Unlike Marks, Brand landed in a cushy situation in Philadelphia after predecessor Bryan Colangelo was fired following the burner account scandal.

While some GMs might be complacent with talented young players like forwards Ben Simmons and Joel Embiid on their roster, Brand took the opposite approach. He opted to swing three massive trades, acquiring small forward Jimmy Butler and forward Tobias Harris in two of them with hopes of accelerating the 76ers’ playoff odds. Smartly, he also sold high on point guard Markelle Fultz, whose unknown future wasn’t worth the wait for Philly. Pairing Simmons and Embiid with legitimate All-Star caliber veterans gave the 76ers an edge they didn’t have last year.

Brand has turned a good Philadelphia team into a potentially great one by being aggressive on the trade market, and that isn’t the mark of a rookie GM.

Horst has only been the Bucks GM since 2017, and even with inheriting arguably the best player in the NBA in Giannis Antetokounmpo, he’s done a magnificent job in turning Milwaukee into the NBA’s best team.

Horst has actively improved the Bucks at every chance. In his two years, he has brought in a legitimate starting point guard in Eric Bledsoe, signed stretch bigs Brook Lopez and Ersan Ilyasova in free agency, replaced coach Jason Kidd with Mike Budenholzer, and brought in needed depth at the trade deadline in power forward Nikola Mirotic. Budenholzer was the perfect coach to turn the Bucks into contenders, while also helping unleash the best version of Giannis and getting the most out of the rest of his team.

Nobody expected the Bucks to have the NBA’s best record at this point in the season. Horst deserves most of the credit for getting them to this point with his winning decisions, and that’s why he deserves NBA Executive of the Year.