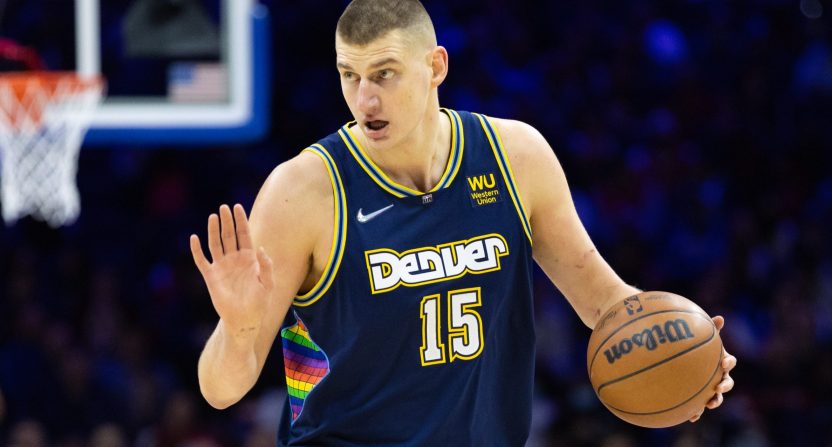 With the NBA regular season over, here are our picks for the major awards:

Giannis Antetokounmpo is incredible. Joel Embiid is fantastic. However, this award belongs to Nikola Jokić. The reigning MVP enjoyed a better regular season than last year. If that’s still not enough to convince you, consider this: His PER was the highest in NBA history. All the advanced metrics favor Jokić, who led the league in win shares (15.2), box-plus minus (13.7), and value over replacement player (9.8). He also led the NBA in doubles (66), 13 more than Utah’s Rudy Gobert.

If not for Jokić, Denver wouldn’t be a playoff team. The Nuggets’ second-best player, Jamal Murray, has been out all season (torn ACL). Michael Porter Jr. has been limited to nine games due to a back injury. Jokić has carried Denver, posting the highest usage rate (31.9) of his career. What further bolsters Jokić’s chances, is that he has played 74 games, as opposed to Embiid (68) and Antetokounmpo (67).

There are several worthwhile candidates including the reigning and three-time DPOY Rudy Gobert. Marcus Smart is one of the key reasons why the Boston Celtics had the NBA’s best defense and the best record since the All-Star break (17-5). And Mikal Bridges deserves some love for the Phoenix Suns, who allowed the third-lowest field-goal percentage (44.4).

In a tough judgment call, we’re going with Adebayo. He’s one of the most versatile defenders in the league, equally adept at guarding on the perimeter as well as the post. According to the Miami Herald, the Heat’s defensive rating (104.8 points per 100 possessions) when Adebayo was on the court would rank first among NBA teams. Adebayo is a game-changer for a Miami team that surprisingly finished with the best record in the East.

Ja Morant has been a highlight factory dating back to his college days at Murray State. Plus, he was the NBA’s 2020 rookie of the year. Still, the improvement from his sophomore year to his third year has been remarkable, posting career highs in almost every single category. The only thing slowing him down: nagging injuries. Morant, a fearless, attack-the-basket force, led the league in points in the paint (16.6).

It has been a season of redemption for Herro after a disappointing sophomore year. As a rookie, he looked like the next big thing when he erupted for 37 points in an Eastern Conference Finals playoff victory against Boston. But Herro did not make the kind of jump many expected to see. Some wondered if his celebrity lifestyle was getting in the way of his development. His buddy/rapper Jack Harlow wrote a song about him, titled “Tyler Herro.”

Herro responded to the criticism by leading the league in scoring off the bench while setting career highs in every major category. The biggest improvement came in his 3-point shooting as he went from 36.0 percent last year to 39.9 this season.

The 2021 NBA draft class looks good. So many lottery picks have impressed, including the top four overall selections: Cade Cunningham, Jalen Green, Evan Mobley, and Barnes. In a crowded field, Barnes has been the most impactful.

One statistic tells you all you need to know about Barnes’ value to Toronto. He was ninth in the league in minutes per game (35.4). Barnes has come on strong since the All-Star break to help the Raptors to the fifth-best record in the East. Some of his advanced metric numbers (VORP and win shares) were better than the 2021 rookie of the year LaMelo Ball.

The defending Western champion Suns weren’t favored to win their own division. They were expected to finish third in the Pacific, behind the Los Angeles Lakers and the Golden State Warriors. Williams deserves all the credit for guiding Phoenix (64-18) to its best record in franchise history. He did so even though neither Devin Booker nor Chris Paul played 70 games.

Phoenix went an incredible 32-9 on the road. ESPN pointed out that their .780 winning percentage was better than every other team’s home winning percentage. That’s only the second time that’s happened and the first since the 1969-70 NBA champion New York Knicks.