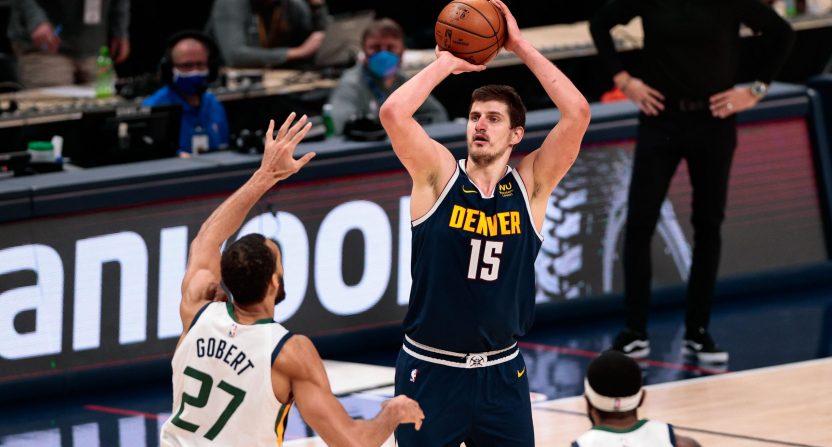 The 2020-21 NBA regular season ends this weekend. Here are our picks for the major awards:

Dan Le Batard once joked that Nikola Jokić looks like a “loaf of bread.” The occasionally doughy seven-footer is the odds-on favorite to win the NBA MVP award. Whatever argument you could previously make against Jokić ended over the past month. Since Jamal Murray suffered a season-ending knee injury on April 12, Denver is 10-4.

The Nuggets (44-24) have thrived without their second-best player, primarily because Jokić is the engine that drives this machine. He’s enjoying one of the greatest offensive seasons we’ve ever seen. Jokić leads the league in box plus minus, win shares, and value over replacement player. He’s also second in PER.

He’s a magician with the basketball, possibly the best passing big man in history. As NBA.com pointed out, Jokić has led the Nuggets in scoring, rebounds, and assists in 23 games this season. Giannis Antetokounmpo did the same in 21 games during his MVP season. Joel Embiid (First in PER: 31.18) has been fabulous for the East-leading Philadelphia 76ers (47-21), but he’s played 19 fewer games than Jokić due to injury.

This also probably won’t be a close race. Rudy Gobert is primed to win his third Defensive Player of the Year award in four seasons. In the history of the league, only three individuals have won it that many times: Dikembe Mutombo (4), Ben Wallace (4), and Dwight Howard (3). Gobert is first in defensive rating and third in real plus-minus rating.

It must be quite a gratifying season for Gobert, who will always be remembered as the face of sports shutting down in 2020. Now, he’s the backbone of the team with the NBA’s best record. The Jazz were 12th in preseason win totals at 41.5. They have exceeded expectation thanks to being third in team defensive rating.

Some will argue for Philadelphia’s Ben Simmons, a versatile defender who can guard all five positions. However, as ESPN’s Tim MacMahon pointed out, there’s a substantial difference between the two when it comes to on-the-floor impact.

Julius Randle’s evolution to NBA All-Star has been impressive. By volume, he’s the most improved three-point shooter in league history, going from 27.7 percent last year to 41.3. He’s shooting better from deep than long-range specialists Duncan Robinson (40.8) and Danny Green (40.5). This added dimension has changed his game and changed the Knicks, who have been the biggest surprise team in the league.

How did he do this? Having a new coach in Tom Thibodeau helped. Randle is the hub of an offense that relies on his isolation plays and him finding open shooters. But Randle also put in the work in the offseason. While the sports world shut down, Randle had nothing but time to go through grueling workouts.

The L.A. Clippers have owned this category for the past three seasons, with Lou Williams winning twice and Montrezl Harrell winning last year. But both Williams and Harrell are no longer with the Clippers, and neither have been quite as effective.

Jordan Clarkson is enjoying his best season for one of the NBA’s top benches. The Jazz are third in the league in bench points, and Clarkson is second on the team in scoring behind Donovan Mitchell (26.4). Clarkson might get competition from teammate Joe Ingles, who’s shooting 46.3 percent from three-point range. However, Ingles moved into the starting lineup recently.

A shoutout to Derrick Rose. If he’d been with New York the entire season, he’d have a strong case. His plus-minus of 206 is the highest on the Knicks despite playing only 32 games with the team. Plus, New York is 22-10 since trading for the former MVP.

LaMelo Ball is exciting and has helped his team improve from 23-42 last year. Charlotte (33-35) is in the playoff hunt as the No. 8 seed in the East. Among rookies, Ball is first in assists per game, second in scoring and rebounding, and second in PER. Ball, who missed 21 games due to injury, has quickly made the Hornets matter.

Thibodeau won this honor in 2011 as a rookie head coach with the Chicago Bulls. What he’s done this season might be an even better coaching job.

The Knicks (38-30) are a typical Thibodeau team: tough and without flash. They’re e slow-paced and don’t take many three-pointers, but play excellent defense. The Knicks had the lowest over/under win total (21.5). Instead, they’re the No. 4 seed in the East.