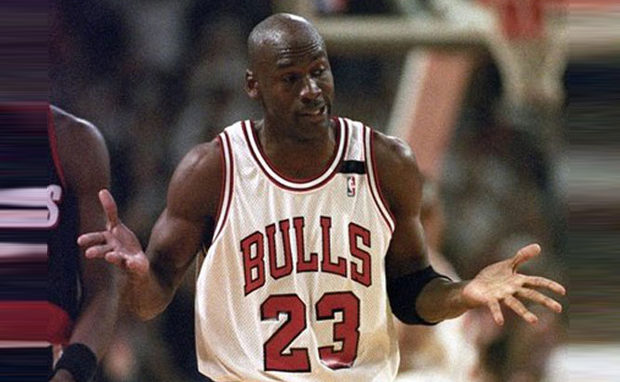 Michael Jordan, the greatest of all-time, occasionally overcame some lackluster teammates. That got us wondering: who were the worst players on Jordan’s six title teams with the Chicago Bulls?

To be fair, these are only guys who appeared in at least half of Chicago’s games during any given championship season.

They are ranked by their box plus/minus (BPM) during their Bulls careers. To give you a frame of reference, Giannis Antetokounmpo’s box plus/minus rating for the 2019-20 season is a league-leading +11.5. Rookie Jordan Poole’s is a league-worst -6.6.

This is the worst starting five:

Where is he now: Color commentator for Chicago Bulls television broadcasts

In 1989, the Chicago Bulls had three first-round draft picks. Think about that for minute. A team that already had Jordan, Scottie Pippen, and Horace Grant had the assets to add another young star. They drafted King (No. 6 overall), B. J. Armstrong (No. 18), and Jeff Sanders (No. 20). The only guy to make an impact was Armstrong, an All-Star in 1994 and a reliable guard who played almost every game for the Bulls. Chicago passed on high schooler Shawn Kemp (No. 17). How crazy would that have been? The ultra-athletic Kemp AND ultra-competitive Jordan?

Instead, the frontcourt youngster the Bulls took was King. Chicago won three championships during King’s time, but his contributions were limited. Yes, he averaged 8.9 points as a rookie reserve, but the advanced metrics tell a more revealing story. King had a negative BPM every season of his career. Considering how good his teammates were, that’s flabbergasting. During 1993-94, Chicago traded King to Minnesota for Australian center Luc Longley. King, always a good talker, parlayed that talent into a broadcasting gig. He has great stories like this one about an awkward encounter with Jordan:

Where is he now: Head coach of Lourdes University, NAIA school in Sylvania, Ohio

Dennis Hopson was a talented player who spent most of his early career on terrible New Jersey Nets teams. He was the third overall pick of the 1987 draft out of Ohio State. Hopson put up promising statistics in his first three seasons, including a career best 15.8 points in his third and final season with the Nets. But despite leading the team in scoring, Hopson was dealt to the Chicago Bulls before the 1990-91 season.

The was a significant deal because Hopson was supposed to provide some scoring punch off the bench. Well, the Bulls won their first NBA title with little help from Hopson. In 61 games he was basically a non-factor and appeared in only five playoff games. He was arguably the worst player on the roster. Former Bulls forward Scott Williams said that Hopson couldn’t handle Jordan’s intensity in practice: “It ruined Dennis Hopson. … Hopson had to take the abuse of Jordan. It was a mental beatdown.”

The following season, Hopson played only two games before being traded to Sacramento. After the 1991-92 season, Hopson never played in the NBA again.

Where is he now: Color commentator for Iowa basketball radio broadcasts

Bob Hansen probably maxed out what most thought his career would be. He was a third-round draft choice out of Iowa in 1983 – back when the draft was 10 (!) rounds. The 54th overall player became a starter for the Utah Jazz alongside Karl Malone and John Stockton. Hansen even participated in the 1990 All-Star weekend, finishing fourth in the three-point contest.

During the 1991-92 season, Hansen was traded from Sacramento to Chicago for Dennis Hopson. Hansen was almost as bad as Hopson during the regular season (7-of-25 from 3-point range, and 8-of-22 from the free-throw line).

As poorly as Hansen played, he did have one great moment. In Game 6 of the 1992 NBA Finals, Chicago was trailing Portland by 15. Coach Phil Jackson gave Jordan a rest and let Hansen start the fourth quarter. Hansen made a three-pointer to help ignite a rally as the Bulls came back to win the game and clinch the series. In five minutes, Hansen had three points, an assist and a steal. After the game, Jordan said: “I’m glad for Bobby Hansen.”

That turned out to be the final game for Hansen, who retired.

Where is he now: Scout for the Charlotte Hornets

When Dickey Simpkins joined the Bulls, we thought we might never see Michael Jordan dribble again. Jordan was playing baseball when Simpkins was a first-round pick (21st overall) in 1994 out of Providence. Then, in the middle of Simpkins’ rookie season, Jordan returned. Simpkins will go down in history as one of many ineffective and largely irrelevant Chicago frontcourt players. Playing parts of five seasons with Jordan, he never averaged more than 3.6 points.

Simpkins should count himself lucky. Right before the 1997-98 season, he was traded to Golden State. The Warriors later cut him, but then the Bulls claimed him off waivers midseason. That was the best thing possible because he was a part of Jordan’s final championship team. And for the first time, he appeared in the playoffs, playing 13 games including two in the NBA Finals. During the playoffs, Simpkins shot 37.5 percent.

It bares noting that Simpkins’ best season with Chicago occurred the year after the championship Bulls were broken up. He averaged career highs of 9.1 points, 6.8 rebounds for a Chicago team that went an Eastern Conference worst 13-37 during the lockout-shortened 1998-99 season.

Where is he now: Co-owner of Corky’s Ribs and BBQ in Little Rock, Arkansas

For a guy who statistically was below average, Joe Kleine sure lasted a long time in the NBA. He must have had some value that wasn’t obvious to the basketball layman. Kleine played 12 seasons despite being a career backup who never averaged double figures in either points or rebounds. Kleine was the quintessential journeyman, playing for seven different teams. The seven-footer was once the sixth overall pick in the 1985 draft by the Sacramento Kings. It quickly became apparent how limited he was offensively.

The best thing about Kleine’s career? He played with Hall of Famers like Michael Jordan, Charles Barkley, Larry Bird, Kevin McHale, Scottie Pippen, Dennis Rodman, and Robert Parish. When Kleine joined the Bulls, it wasn’t the first time he was a teammate of Jordan. They were both on the 1984 gold-medal winning Olympic team as collegians. Kleine’s role in 1997-98 was considerably less noticeable. He appeared in 46 games with one start and shot a team-worst 36.8 percent. Kleine never made it off the bench in the playoffs, but he has a ring. Plus, he had a small role in the terrible 1996 movie Eddie.