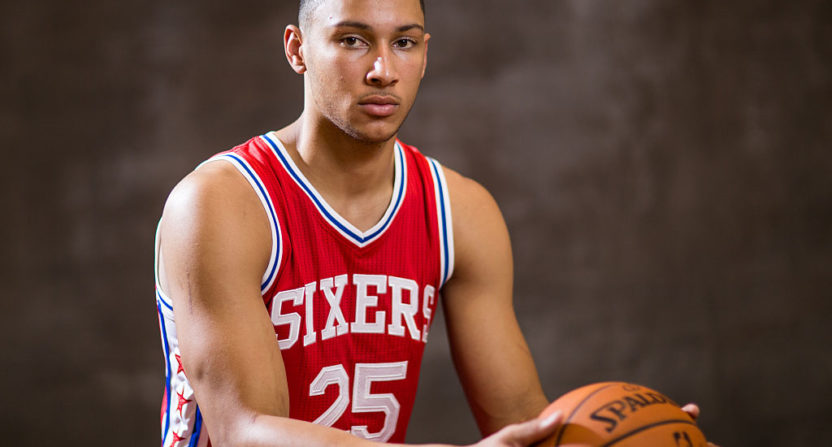 NBA training camp begins on Monday, and few teams are more excited than the Sixers to begin the new season. After four years at the bottom of the East and a slew of lottery picks, Philadelphia is finally projected to finish with a winning record and make the playoffs for the first time since 2012.

While Joel Embiid has embodied The Process more than anyone, general manager Bryan Colangelo hinted to The Athletic’s Derek Bodner the team could be much more Ben Simmons-centric this season. Colangelo praised Simmons, the rookie point-forward out of LSU, saying he’s been dominating 5-on-5 practices, and that the team does not expect to keep him under any playing time restrictions:

Bryan Colangelo doesn't anticipate any restrictions on Ben Simmons' availability. Says he's been playing 5-on-5 for a while now. #sixers.

Embiid put up some crazy numbers for a rookie last year. He averaged 20.2 points, 7.8 rebounds and 2.5 blocks. But Simmons has the potential to be an even more special player. Like Embiid, Simmons has also dealt with injury issues. He missed last season after fracturing his foot. And that’s why moving away from a minutes restriction in his rookie year is a huge relief for Sixers fans, a feeling that’s remained absent from Embiid’s trajectory.

Now that Simmons is healthy, he could be the closest thing the NBA has to another LeBron James, at least in terms of a combination of size and playmaking ability. Coach Brett Brown revealed on Wednesday that Simmons, who’s 6’10” and 240 pounds, will start at point guard while guarding 4’s on the defensive end.

Brown: 'I am' locked in to Simmons playing point guard on offense 'when it's a static situation.' Fultz will handle ball in open court, too.

Brett Brown: "I think right off the bat he [Ben Simmons] has the chance to be an elite defensive player." #sixers

While the Sixers brass talked up Simmons, they sounded cautiously optimistic about Embiid’s health.

Embiid faced heavy minutes restrictions last year and made it through only 31 games his rookie campaign ended. He tore his meniscus in January as he suffered a season-ending injury for the third straight year. Even though Embiid hasn’t dealt with any setbacks, he has not yet returned to 5-on-5 play. Brown said he has no idea what they’ll get out of Embiid during training camp.

Brett Brown says he's not able to say what they'll be able to get out of Joel Embiid next week. He has not played 5-on-5 yet. #sixers.

Bryan Colangelo says Joel Embiid will participate in training camp next week. Uncertainty comes with respect to what he'll be cleared for.

While Embiid’s uncertain status could be a result of contract extension negotiations, Colangelo confirmed the organization is proceeding very cautiously concerning Embiid’s health.

Bryan Colangelo says there has been no setback with Embiid. On an ultra-conservative approach to rehab and return. Will know more next week.

In one quote from the Associated Press, Colangelo first guaranteed Embiid would play the season opener before contradicting himself:

It would be heartbreaking if Embiid, who showed dominant flashes last year, misses more time in the 2017-18 season. But what makes the Sixers so interesting is that by trusting their Process, they’ve added multiple young players with superstar potential. For most rebuilding teams, another potential injury-plagued season for Joel Embiid would be devastating. Ben Simmons (and to a lesser extent, new #1 overall pick Markelle Fultz), helps to mitigate that concern.