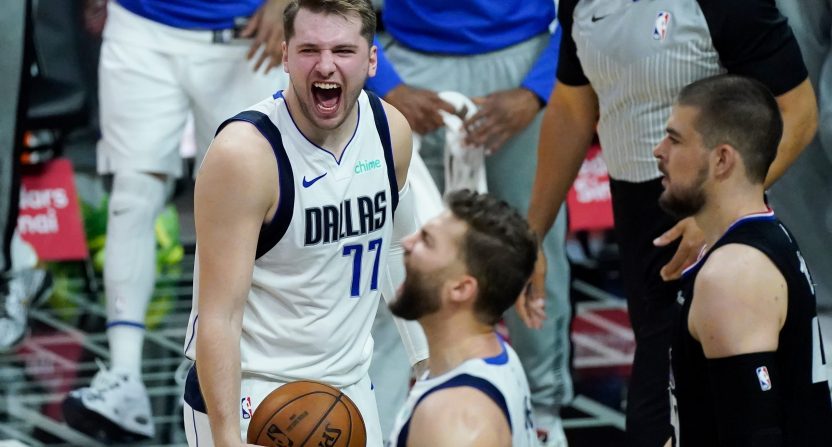 Usually, it’s harder to score in the NBA playoffs. The games slow down and everyone tries harder on defense. Teams play their better defenders and sit their exploitable ones. That seems to have held true this season, a year in which scoring was harder to stop than ever.

The Los Angeles Clippers and Dallas Mavericks have been exceptions. That first-round series (like the similarly offense-heavy Nuggets-Trail Blazers series) has featured off-the-charts scoring. Tuesday’s Game 2 finished 127-121 after a 73-71 first half. Neither the Clippers nor the Mavs have been able to stop anybody.

It’s the Mavericks who have benefited. They’re up 2-0 in the series after winning both games at the Staples Center, sending the Clippers in the direction of a second consecutive epic meltdown in the playoffs. This is a must-win season for the Clippers, and despite apparently improving from last year, they’re on the verge of inexplicably losing again to an underdog. Luka Doncic and the Mavs’ juggernaut offense have torn the Clippers to shreds.

It’s easy, and tempting, to blame the Mavs’ 2-0 series lead on fluky shooting. Dallas has indeed been unsustainably hot on jump shots. They’ve made exactly half of the 70 threes they’ve attempted over the past two games, while the Clippers have made just 32.9 percent despite leading the league in percentage in the regular season. But it’s not quite that simple.

The Clippers have been unable to do anything on defense, as Dallas is generating quality three-point looks consistently. While Doncic and Tim Hardaway Jr. won’t keep up their current ridiculous pace on pull-up looks, it’s not unrealistic to expect that Hardaway, Dorian Finney-Smith, and Kristaps Porzingis will continue to shoot well on catch-and-shoot looks, especially when those shots are open.

NBA.com’s tracking stats defined 61 of the Mavs’ three-point attempts as either “open” or “wide open”, as determined by the distance of the closest defender. Dallas has made 49 percent of those looks. They also haven’t lacked for shots at the rim — where Doncic was perfect in Game 2 — and free-throw attempts. The Clippers have been disjointed and mistake-prone on defense.

A team that has Kawhi Leonard, Paul George, Patrick Beverley, Marcus Morris, Ivica Zubac, and Serge Ibaka should not be struggling this much to stop the opponent. Their individual talent combined with the coaching abilities of Tyronn Lue should ensure that the Clippers are able to reach a certain level on that end, with high-level perimeter defending and rim protection.

Nothing they’ve tried against Doncic has worked. They’ve played a lot of drop coverage. They’ve switched and doubled. They’ve trapped. The Mavericks have had an answer for everything.

One issue for the Clippers is at center, where Zubac hasn’t been good enough. Playing drop coverage against Doncic only works when the dropping center is able to contain drives to the hoop, and Zubac has struggled to do that. The Mavericks have attacked Zubac whenever he’s been on the floor, most frequently with pick-and-pops:

The Clippers don’t seem to want Zubac on Porzingis, likely due to the threat of pick-and-pops (and because they’d prefer that Zubac is free to protect the rim). But Maxi Kleber, a stretch four, gave Zubac all sorts of problems early in Game 2, taking advantage of Zubac’s lack of agility on the perimeter.

Doncic did the same, and the Clippers were not rotating with the cohesiveness or ferocity necessary to make up for it:

We’ve learned that Doncic will have no problems with any individual defender the Clippers put on him. He has incinerated Beverley into dust. He bullies Morris and Batum. He’s been able to dribble by George, and even Leonard’s impact has been rendered negligible by a combination of the Mavericks’ screening and Doncic’s uncanny ability to hit contested shots.

Solving the Doncic problem is the main thing the Clippers have to figure out — everything the Mavs do revolves around Luka. LA needs to get better individual performances from George and Leonard on Doncic (no one besides the two stars should get the Doncic assignment.) They need to fight over screens and bother him from behind. They can’t settle for switches all the time; it has be difficult for Dallas to get a weaker defender guarding Doncic.

They both have the ability to do more, particularly Leonard, who’s famously good at defending a similar point forward in LeBron James. The Clippers as a team can help Leonard and George with a better team-wide strategy. That requires harder, smarter closeouts, and more aggressive help defense.

The Lakers’ defense is actually a good model. Last year, the Lakers destroyed James Harden’s Rockets in the conference semifinals by playing a diversity of coverages on Harden and scrambling efficiently when Harden gave the ball up. Those kinds of rotations require smart and mobile defenders. You need players who see a couple of steps ahead and play disruptively, getting their hands on the ball and taking the right risks.

As far as I can tell, the Clippers have those players. Even the weaker defenders in their rotation, Reggie Jackson and Rajon Rondo, are hard-working, smart, and experienced. Lue has taken to playing smaller lineups for most of the game, with Ibaka struggling to gain a foothold coming back from a long-term injury. When Morris or Batum plays as the nominal center, the Clippers don’t lack athleticism and switchability.

It’s important to mix up coverages, which to their credit the Clippers did in Game 2 after an unsuccessful Game 1. But all five defenders on the court have to have a role. Individual defenders are mostly staying home on shooters, and when they haven’t, there have been no seamless rotations.

Just look at this drive, in which Doncic treats an All-Defense-caliber Beverley like he’s a regular dude:

The Clippers have to crowd the ball and rotate. At that point in the game, they weren’t playing a true center, which gave Doncic an easier route to the hoop. If the Mavericks are going to play Zubac off the court (and that’s what they’ve done so far), the Clippers have to respond by using small-ball to their advantage. They have to trust that the other defenders on the court can rotate to cover shooters.

Putting Terance Mann on the court in the second half of Game 2 was an attempt to give the Clippers another energetic defender. Lue praised Mann after the game and said that Mann would get more minutes next game. Given how important covering ground on defense will be, more Mann minutes makes sense.

It’s absolutely crucial that the Clippers figure this out in Game 3, because they’re a championship-or-bust team. They have to find something that makes them play more as a unit, and we saw none of that in a tense Game 2. The Clippers’ offense isn’t the problem. The Mavs will cool off, but it’s up to LA to put together enough defense on Doncic to avoid another catastrophe.