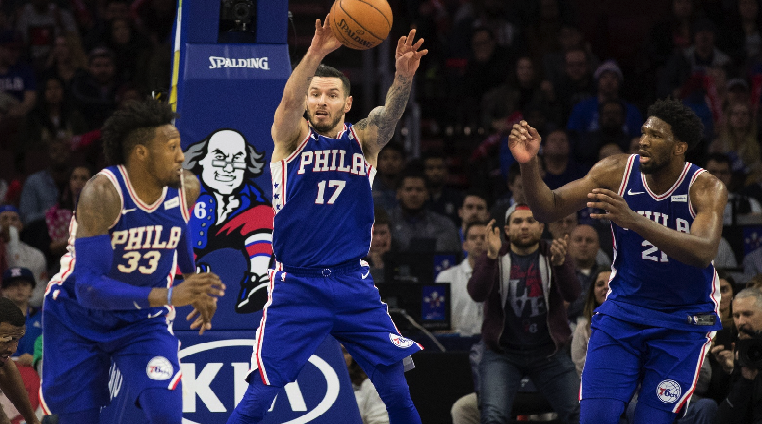 Despite all the college football conference championship games going on Saturday night, I kept going back to NBA League Pass to watch the Philadelphia 76ers, easily one of the elite League Pass teams this season.

Just to clarify: An elite NBA team in terms of wins and losses isn’t necessarily a good League Pass team.

The San Antonio Spurs are a great team and relatively fun to watch when healthy, but I’d easily rather watch the Sixers, with their fast pace and incredibly exciting young talent. The Oklahoma City Thunder have great starpower and name recognition in Russell Westbrook, Paul George and Carmelo Anthony, but right now their offense is an isolation-laden, slow-moving mess. I’d rather watch Joel Embiid, Ben Simmons, Robert Covington, J.J. Redick and Philadelphia right now any day of the week, especially over Big Ten football and a Clemson-Miami blowout.

On this Saturday evening, the Sixers were playing the Detroit Pistons, which was especially intriguing for a few reasons. The Pistons have been the league’s biggest surprise so far this season, getting inspired play from Andre Drummond and off to a 14-9 start, good for fourth in the Eastern Conference. And to add to that, Embiid and Drummond have had some drama this season.

After their first meeting on Oct. 23, a 97-86 win for Philly, Embiid had 30 points and nine rebounds and said about Drummond after the game, “defensively, he doesn’t play any defense. He added that Drummond was talking trash to him the entire game. Those are fighting words, especially since Drummond has been one of the game’s best defenders this season. The Pistons center leads the league in rebounds and defensive win shares and is second in defensive rating.

“He’s been in the league four years now and he’s only played about 30-plus games, so you don’t know what to expect when you play against a guy like that,” Drummond said after that game.

Right before Saturday’s game, Embiid went in on Drummond again. “No disrespect, but he can’t shoot,” The Process proclaimed.

All that added fuel to what turned out to be a great game, even without this entertaining sideshow. Philadelphia raced to a 16-point halftime lead, only to be outscored 33-17 in the third quarter. Embiid then proceeded to foul Drummond out with 2:35 left in the 4th quarter, giving him a wave and a point towards the exits.

Joel Embiid showing Drummond the way out of the game is awsomeness. #TrustTheProcess pic.twitter.com/F6opCQH6yL

Philadelphia ended up with a 108-103 win and even if the individual Embiid-Drummond matchup didn’t live up to the hype, just the fact that there was an interesting subplot going into it made for an even more entertaining watch. The fact that Embiid talks trash all the time on social media and he’s one of the most talented big men of our generation help make the Sixers my third-favorite League Pass watch this season, behind Golden State and Houston.

As an aside, the first quarter of the Sixers-Warriors game on Nov. 18 when Philly blitzed Golden State for 47 points is up there among my favorite, most entertaining quarters I’ve watched all season. You could feel the excitement, the electricity, the chaos and a possible look into the future of how devastating this offense could potentially be.

Philadelphia would be compelling if Embiid was the team’s only dynamic player, but they also have the NBA’s next great positionless superstar in Ben Simmons. Simmons doesn’t just run the floor, he fluidly glides, in a LeBron-esque manner. He can defend all five positions and get to the rim at will. I would bet that it’s more likely than not that Simmons will win Defensive Player of the Year over the next decade if he really wants it.

The Sixers then complement those two freakish matchup nightmares with shooters like Redick — who left money on the table to join this team and whose ability to get a shot off so rapidly is still a marvel to witness — and Covington, who found his stroke against Detroit after a prolonged slump, both making defenses pay dearly for focusing too much attention on their two superstars. And that doesn’t even take into account other fun role players like Dario Saric, Jerryd Bayless — a bomber from three now —Amir Johnson and T.J. McConnell, who’s shooting lights out so far this season.

Sometimes, NBC Sports Philadelphia announcers Marc Zumoff and Alaa Abdelnaby are a little homerish and over the top, yet other broadcast crews in the NBA are far worse.

But as entertaining as the Sixers usually are, even great shows have lackluster episodes sometimes. And that’s what happened Monday night against Phoenix. With Simmons suffering from the flu, he and his teammates were really bad defensively in a lopsided loss to the woeful Suns.

Suns point guard Devin Booker went off for 46 points in a 115-101 win, a lowlight in what’s been a thoroughly entertaining season for the Sixers. After two days off, the Sixers will host the Lakers on TNT, a sequel from Embiid’s Nov. 15 performance where he put up his historic 46-point, 15-rebound, seven-assist, seven-block game.

The Philadelphia 76ers are entertaining as hell, and with such a young roster, they’re only just getting started.