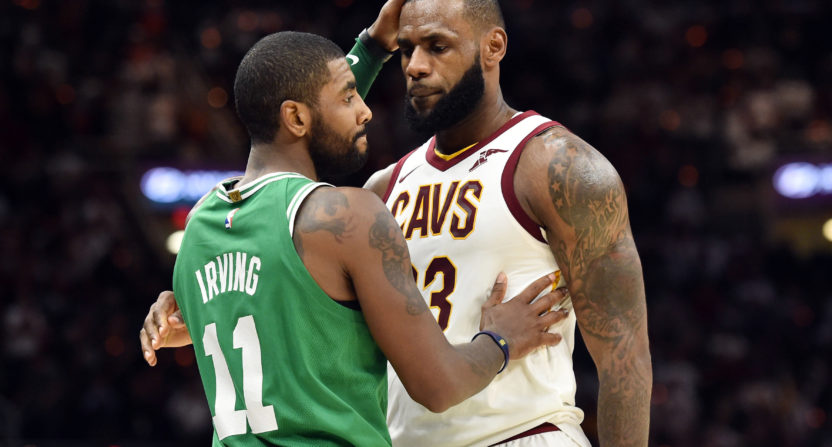 If you somehow managed to miss it, Thursday afternoon was the NBA trade deadline. (Given very little else was happening yesterday in sports, and you’re now reading this article, you probably didn’t. But maybe you were watching the Eagles’ Super Bowl parade and Jason Kelce’s memorable rant.)

The Cleveland Cavaliers ended up being the movers and shakers of deadline day, which is the big takeaway. (Their downfall has been the NBA’s major storyline since Christmas.) But plenty of other teams made deals, giving us to break down from the trade season as a whole.

Who were the winners and losers of the 2018 NBA trade deadline? Here’s a breakdown:

The Cavs were winners, because more than any other team, they just had to do something. Often action is misinterpreted as improvement. We’ve all had the coworker who was an expert at appearing busy and essential while accomplishing next to nothing. (Uh, for the record, I’m thinking of people at my old jobs.) Put another way: teams sometimes make trades that are the equivalent of a kid pushing the food around on his plate so it looks like he ate a bit of everything.

This Cavs team, though, absolutely needed to do something, anything, to change the vibe of the current season. LeBron is a generational talent, a once-in-a-lifetime player who the Cavs have somehow landed twice.

There’s two possibilities in play. First, this is his last year in Cleveland, which means they need to try to max out what could be their last shot at relevance for a long time. Second, he’s open to returning, in which case the best way to facilitate that was demonstrate a willingness to think big, moving out players like Isaiah Thomas for pieces that should, in theory, lead to a more cohesive roster around James.

Regardless, things couldn’t be worse than they were before, and the locker room vibe was obviously reaching the event horizon. The Cavs may have locked themselves up a bit more (and, in their acquisition of Jordan Clarkson, cleared the way for James to consider the Lakers), but if LeBron leaves, they’re screwed anyway. They were able to reconstruct their entire rotation in a single day, while shipping out all of the problems (and, with their trade of Dwyane Wade to the Heat, avoiding new ones). Plus, they held onto the Nets pick, which is a solid asset to have, LeBron or no.

Will it be enough to win a title? Maybe not! But it’s enough to stave off disaster, and to at least give themselves a chance to retain LeBron through the end of his career. Plus, imagine if he’d left in the wake of the Cavs sitting on their hands as his final season imploded? That’s the kind of thing that can stick to a franchise for a very long time. Fans would have been much less quick to side with Dan Gilbert in the ensuing Comic Sans flame war, which we might still get.

DeAndre Jordan remained a Clipper. His contract expires this offseason, and Woj already reported that unless he’s willing to take a team-friendly deal, the Clippers will likely move on.

Los Angeles sits ninth in the West, despite being just two games over .500. In fact, though the Clippers are a half-game out of the final Western playoff spot, they’re also just two games out of the fifth seed, thanks to plenty of disappointing starts up and down the conference. Still, having traded Blake Griffin to Detroit, Jordan remains on a team that even in a best-case scenario looks like cannon fodder for the Warriors or Rockets.

A solid finish with a contending team would have been a much better boost for his free agency this summer, while also probably being a hell of a lot more fun for him. (Though as I look at the snow piling up outside, I do wonder if a bad team in SoCal is really that much less fun than a good team in the Midwest or the Northeast.)

The Lakers taking advantage of Jordan Clarkson’s solid year in order to move his contract to free up space for possible max-level free agents this summer was always a possibility, but they probably didn’t think they’d be able to convince the Cavs to open it up for them so easily. In fact, this deal may have been something like what a LeBron sign-and-trade would have looked like, but with the Lakers sending back more in return.

Now they’ve opened up their books, they get a free look at Isaiah Thomas who can help ease the pressure off Lonzo at the end of his rookie season, and maybe even a chance at retaining him for a discount if other offers don’t materialize in the wake of a disastrous year for IT. And to top it off, they nabbed a first-rounder for their trouble, which is far from nothing. Indeed, many teams were hesitant to part with first-round picks at all, and teams are unearthing more good players later in drafts than ever before. (Kyle Kuzma says hello!)

Even if the Lakers don’t land James, Paul George, or another max-level player, they can roll their cap space over a year, perhaps taking more expiring money on to garner draft assets, or taking flyers on one-year players (preferably with a team option) who could turn into contributors. It’s a great place to be.

The Celtics and the Raptors had been passively benefiting from the Cavs implosion. (Well, given the Kyrie trade, the Celtics may have taken a bit of an active role.) Now, though, the Cavs are probably going to be a bit better, even if it’s just via the placebo effect, and Boston and Toronto’s chances of sneaking through the Eastern Conference playoffs without facing LeBron, who essentially owns the Eastern Conference playoffs as long as he’s on a relatively competent team.

The Raptors and (especially) the Celtics are still formidable teams, but now the Eastern Conference seems much more jumbled, and it’s hard to view yesterday’s developments as anything but a net negative for them.

Plenty of teams that stood pat are still in great shape. Instead of jumping the market for massive deals that could lead to an untenable roster (a la the Pistons) or breaking down the entire roster (a la the Cavs), there were teams like the Pacers who elected not to send out key pieces (in Indiana’s case, Darren Collison) in an effort to make marginal improvements. Continuity is good!

There’s also likely going to be a buyer’s buyout market in the near future; already we have the possibility of a Vince Carter return to Toronto. The buyout list is where teams can get cheap rentals without giving up any future assets; it’s unlikely any of them will have an impact on the championship race, but you never know where marginal additions can help.

Shams. That’s a rough L to take, but there’s no shame in losing to the best.