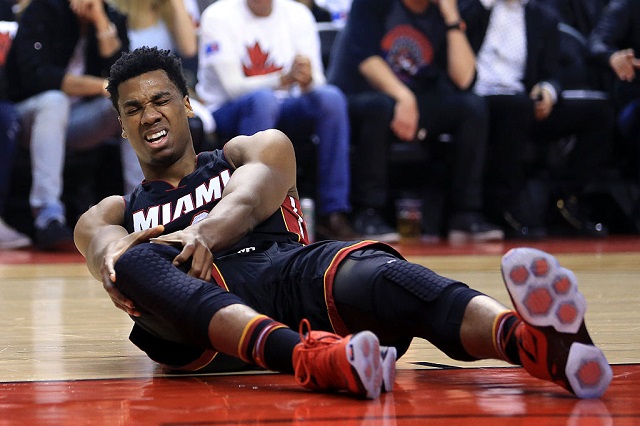 There’s no need for a long setup or preamble here. As Hassan Whiteside goes, so do the Miami Heat.

If the sprained knee Whiteside suffered in Saturday’s Game 2 against the Toronto Raptors prevents him from returning to the court this postseason (the Heat, for whatever it’s worth, are saying he’s day-to-day), Miami has little shot of advancing past the Raptors or no shot of pulling off the upset over the Cleveland Cavaliers in the Eastern Conference Finals.

The latter was already a long shot. Cleveland is clearly better than Miami. But if there was one team in the Eastern Conference with a ceiling that could just maybe match the Cavaliers, it was the Heat. When healthy, they have nearly everything you look for in a LeBron usurper. Multiple wing defenders — Luol Deng and Justise Winslow — to throw at him. A couple of steady scorers (Dwayne Wade and Goran Dragic). And a center that could maybe deter LeBron from repeatedly attacking the rim.

Whiteside, who is averaging 12 points, 10.9 rebounds and 2.8 blocks in 29 minutes per game this postseason, is that guy. He’s a one-man wrecking crew, the lone dynamic player on the Heat roster. Remember a few years ago how Roy Hibbert spooked LeBron, and had him working on floaters and all sorts of other ways to avoid the Pacers big man? Whiteside has that type of game-changing potential.

He led the league in blocks this season (3.7) and has been even better at protecting the rim in the NBA Playoffs. Opponents are shooting just under 44 percent at the rim against him, according to NBA.com’s player tracking data. Just look at how the paint opened up for Toronto as soon as Whiteside left the floor. The Raptors, led by a timid Kyle Lowry, shot just 37 percent at the rim in Games 1 and 2. Then Whiteside got hurt, Miami was forced to rely on the aging bodies of Udonis Haslem and Amar’e Stoudemire, and suddenly Toronto’s shot chart looked like this: 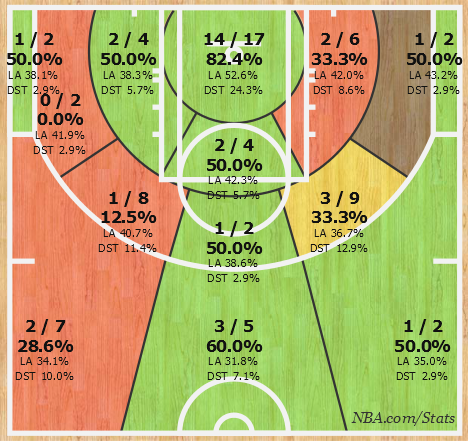 This was no fluke. After the game, the Raptors made it clear that they’re fully aware of what a Whiteside injury means and the opportunities it opens up.

DeMar DeRozan says "all of us will be more aggressive" attacking the rim if Hassan Whiteside is out.

The Heat have held the Hornets and Raptors — two stellar offensive teams during the regular season — to a stingy 95.9 points per 100 possessions this postseason with Whiteside on the court, per NBA.com. When Whiteside sits, that number climbs to 97.2, and look for it to rise even more as Miami no longer can match Whiteside’s rest with certain opposing lineups.

Others come on the pick-and-roll, where Whiteside is one of the most effective finishers in the league. Only six big men averaged more points per possession while rolling to the hoop following a screen, according to NBA.com’s data from Synergy Sports.

The question for Miami is where to go from here. The good news for the Heat is that Toronto center Jonas Valanciunas is also out for the remainder of the series. Valanciunas had been playing the best basketball of his career and is particularly adept at throwing his strong body around near the offensive glass. But with him out of the picture, the Raptors have just one big man — Bismack Biyombo — capable of causing damage in the paint. And even he isn’t much of an interior scorer.

The Heat might be better off scrapping big men altogether and just playing with a bunch of wings and guards. They could go with a lineup of Dragic, Josh Richardson, Wade, Joe Johnson and Luol Deng, and dare the Raptors to feature Biyombo as a response. Such a strategy could work, too.

Then again, sneaking by a flailing Toronto team was never the goal. The Heat want a chance at LeBron and until Whiteside went down, it appeared to be a sure thing that they would get one. Now it’s unclear whether they can even knock off Toronto. And even if they do, it would be only be staving off the execution.

A little over a year ago, no one knew who Hassan Whiteside was. Now he’s the one player one of the top Eastern Conference teams can’t do without. It’s funny how things go sometimes. But for the sake of Miami, and basketball fans all over the country desperate for a competitive Eastern Conference Finals, let’s all hope that Whiteside makes it back to the court soon.