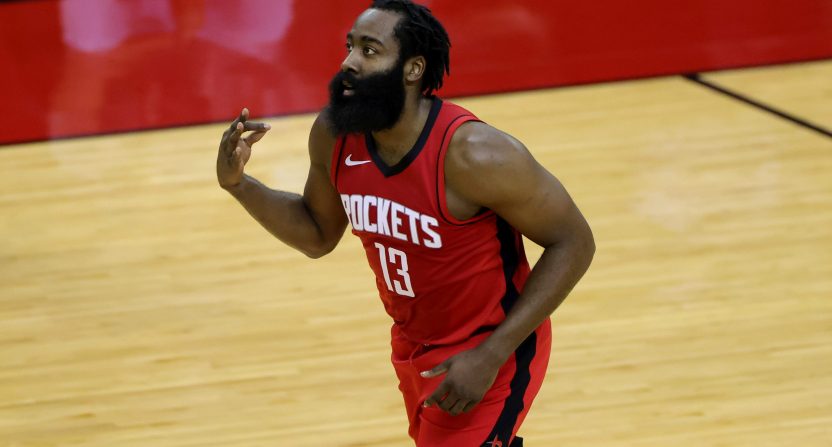 Well, this is going to be fun. The Brooklyn Nets have three superstars after trading a massive haul of players and picks to three different teams in a mega-blockbuster to acquire James Harden. This leaves the NBA in a completely different place, and puts all the pressure on this year’s Nets to win it all.

Brooklyn bet it all on Harden, who burned all of his remaining bridges in Houston. The Nets traded four first-round picks and four pick swaps (all of which are unprotected), established 26-year-old scorer Caris LeVert, solid young rim protector Jarrett Allen, veteran wing role player Taurean Prince, and 22-year-old flier Rodions Kurucs to the Rockets, Indiana Pacers, and Cleveland Cavaliers as part of the massive four-team deal.

All of the picks went to the Rockets, who also flipped LeVert to the Pacers for Victor Oladipo. The Cavaliers acquired Allen and Prince, and traded Dante Exum to the Rockets. That’s a great return for Houston, and it’s impressive work from the Pacers to turn Oladipo on an expiring deal into LeVert, who’s younger and under team control for longer. The Cavs should be thrilled with their work here. For the Nets, it’s all or nothing: championship or bust.

This deal is much different from the Nets’ move for Kevin Garnett and Paul Pierce in 2013, which turned out disastrously, but Brooklyn knows better than anyone how much of a risk it is to trade away your future. Without a ring, the cost is crippling. That’s especially true if the stars aren’t guaranteed to be around for a long time. The Los Angeles Clippers will reckon with these questions if they don’t win a championship this season and Kawhi Leonard leaves.

Kevin Durant is 32. Harden is 31, and has a player option after 2022. Kyrie Irving is 28 and a complete mystery at the moment. This is undoubtedly a major risk for the Nets franchise, who did such an impressive job climbing back to relevance after the Pierce-Garnett megadeal.

We’ve seen risks pay off. The Los Angeles Lakers bet everything on pairing Anthony Davis with LeBron James, and they won a championship. The Toronto Raptors traded an established 60-win team for one year with Leonard, and it paid off handsomely. To have a legitimate shot at winning a championship in today’s ultra-competitive NBA, you have to take big risks. Unless you’re the Golden State Warriors and you can convince an MVP to sign with your super-team (with a fluky cap spike to boot), a championship comes with a cost.

This is a more significant risk than anything the Lakers, Raptors, or Clippers did, though. The Nets now have no draft capital of note, which is bad both for drafting young, affordable players post-contention, and for any future trades they might want to make. Their depth took a hit, with sixth man LeVert gone and their best rim protector Allen off to Cleveland with Prince.

These next two seasons are everything for the Nets. The pitfalls are numerous. Irving has been out for personal reasons since last week, and he has reportedly violated the league’s COVID-19 protocol during his absence. It’s impossible to know what’s going to happen next with Irving, particularly given his injury history. The loss of Spencer Dinwiddie robs the Nets of a backup point guard, shoehorning Timothe Luwawu-Cabarrot into that role.

There are obviously a lot of mouths to feed with everyone healthy and available. Harden needs to figure out how to play real basketball. He can’t just dribble for 16 seconds and run spread pick-and-rolls. Reducing Durant and Irving to glorified spot-up threats won’t get this team past the Lakers, or potentially even the Milwaukee Bucks.

The task for Steve Nash and his All-Star team of assistants is sorting out which star does what, and how often each gets the ball. Harden is the second-best player on the team, but it’s reasonable to expect that he’ll carry a heavier load than Durant, a la Stephen Curry in Golden State. Durant can thrive in more of an off-ball role, picking it up in the playoffs. He can also be a great initiator and playmaker, as he showed in a 13-assist performance over the Denver Nuggets on Tuesday. Irving won a championship as a secondary player, but it remains to be seen how he’ll respond to Harden and Durant presumably taking the majority of touches.

Harden spent his entire tenure in Houston as an iso specialist who ultimately feuded with every star teammate he played with. He hasn’t moved off the ball since he last played with Durant. That exaggerated style of play worked pretty well for what it was, but a Nets championship won’t come with that version of Harden. Nash has to find a way to integrate a more functional offense that capitalizes on these players’ deadly shooting, high-level passing, and general eliteness. It isn’t an easy task, but the ceiling is sky-high.

They still have complementary players. Joe Harris is perfect for this — a great spot-up shooter and quality defender. DeAndre Jordan can be the lob-catching, rim protecting center, though they will need to find a backup. Jeff Green, Landry Shamet, Luwawu-Cabarrot, and Bruce Brown can give quality minutes. They’re likely not done finding talent, whether through trades or potentially through the buyout market. Size and defense should be a priority, as well as a backup guard.

In addition to whatever chemistry and availability issues that they might run into, their biggest problem will be getting stops against the best teams. Harden isn’t a bad defender — he’s strong and stout, to the point that the Rockets trusted him to straight-up guard LeBron in two games this past week — but his effort can wane. Jordan isn’t a dominant rim protector anymore.

Compare them to the other top championship contenders, and defense is a legitimate concern. The Lakers have Anthony Davis and a much more consistent defensive ethos, in addition to Playoff LeBron. The Clippers have every advantage on defense, particularly with Serge Ibaka replacing Montrezl Harrell. The Bucks, Celtics, and Miami Heat are all much better on defense than the Nets.

It’s possible that the pure talent of Durant, Harden, and Irving can overcome that. Those are three really good players. Two are MVPs, and two are champions. They can all shoot, pass, and dribble better than most players in the NBA. This feels like the ultimate test of how much talent alone can win in the NBA.

Brooklyn bet all its chips that this ultra-elite big three is enough. It remains to be seen what happens with Irving. Could the Nets trade him for better-fitting players if Irving’s availability continues to be a question? They can’t afford to have anything derail their chances of winning it all this season. They mortgaged their future for this chance.

The Lakers and the Clippers still look better than this Nets team. That doesn’t mean this bet can’t pay off. There will be fireworks and drama either way.