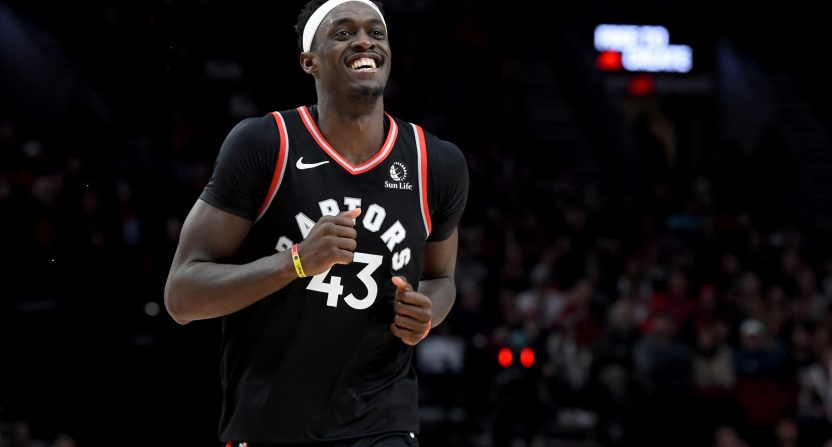 Don’t look now, but the Toronto Raptors are 15-5 and profile as arguably the Eastern Conference’s third or fourth-best team. Pascal Siakam is an MVP candidate in a year where the race seems wider than usual. Nick Nurse is probably a better tactical coach than many believe. Veteran talent (Kyle Lowry, Marc Gasol, Serge Ibaka) mixes with intriguing and fun younger pieces (OG Anunoby, Terence Davis, Chris Boucher). Add a handful of complementary NBA talent — Fred VanVleet, Norman Powell, Rondae Hollis-Jefferson — and you have a nucleus of a good and competent basketball team.

It’s satisfying to watch things coalesce in Toronto after the departures of Kawhi Leonard and Danny Green. There has been no championship hangover or complacency, perhaps because these players are determined to show they are more than a team Kawhi carried to a title. They’ve gone from accessories —  expected to hit open threes and complement Leonard — to the true core, a fairly unique trajectory for an entire team.

Toronto has a star (Siakam), but not an absolute luminary in the style of Giannis or Harden, or even Luka Doncic. Siakam was not the player anyone thought the Raptors could build around; he was simply a player they could build around. He grew in a comfortable environment that produced exponential improvement, to the point that he could realistically win Most Improved Player for a second straight year. Now, he’s another positionless unicorn, with a wide-ranging and success-driving skillset.

Masai Ujiri is one of the best basketball architects out there. Rumors of the Knicks chasing him are basically a rite of passage. Ujiri has constructed an organization that makes smart decisions, develops players internally, and finds ways to sustain success. This year was going to be one of his biggest challenges. It’s gone better than anyone could’ve expected.

FiveThirtyEight projects Toronto to finish with a 58-24 record, second in the league behind only Milwaukee. That projection feels optimistic, but Basketball Reference has them at 56.5 wins and ESPN has them at 58. They will likely stick around the elite tier of the Eastern Conference, alongside the Bucks, Sixers, and Celtics.

Everyone is contributing. They feel like a modern basketball team, striking a nice balance between equilibrium (the seventh-highest assist percentage in the league) and a defined star (Siakam’s usage rate is 29 percent, the 16th highest among players who’ve played at least nine games). Their shot profile is favorable: they’re among the most frequent three-point shooting teams, and they generally refrain from midrangers.

Siakam, averaging 25 a game, finds shots everywhere. He posts up at the eighth-highest rate in the NBA, and scores 1.06 points per post-up, a quality figure. His three-point percentage is all the way up to 39 percent, improved from 36.9 last year and 22 percent two years ago. When he has the ball, opponents have to respect everything, opening up shots for teammates:

You know you’re a star when you create quality shots for your teammates with this amount of ease. Lou Williams is clueless on defense, but he faced an unenviable decision: drift away from Siakam and cover his man (Davis) on the perimeter, or disrupt Siakam’s drive and leave Davis. He chose the latter, and Davis canned a three. The more Siakam recognizes these early passes, the better for the Raptors.

There are good signs. Siakam is up to 4.0 assists per game, from 3.1 last year, and he passes more frequently out of drives this year. He plays like a player learning the fruits of his basketball gifts. In transition, he gallops, and only Giannis and LeBron would be harder to stop in this situation:

Toronto create points from defense. Their steal numbers don’t stand out, but they have opportunistic defenders, and they’re switchable across the perimeter. VanVleet is small, but he gets to the right spots and stays feisty. Anunoby is growing into one of the better young defenders in the NBA. A revitalized Hollis-Jefferson is a welcome presence off the bench.

With the third-best defensive rating in the NBA, the Raptors know what they’re doing on that end. Nurse sets them up with a concrete gameplan and Toronto executes with coherence and solidity.

Things should only improve as Ibaka and Lowry return to health. They should have the depth to consistently win regular season games, particularly in the soft Eastern Conference. Concerns surround their ability to score consistently against good teams. The playoffs will bring such questions to the forefront, but there’s plenty of time until then.

Toronto’s unexpected success raises interesting dilemmas. Gasol and Ibaka are free agents this offseason, and there had been discussions this summer about whether the Raptors would trade one or both if they didn’t turn into a contender. Well, they turned into a contender. That probably rules a selling trade out. With heavy money tied to Siakam and Lowry over the next couple of seasons, Toronto should be happy with the chance to open cap space this summer. Even then, it might be tough to see Gasol or Ibaka walk for free.

For a team like the Raptors, staying consistently in contention should be enough to satisfy fans, especially after their championship last season. Ujiri is savvy, and as we’ve seen in the past, he’s willing to take an ambitious next step to take a very good team to a great team. With Siakam as a centerpiece and a host of improved pieces surrounding him, the path to consistent success is there. Toronto will take it.