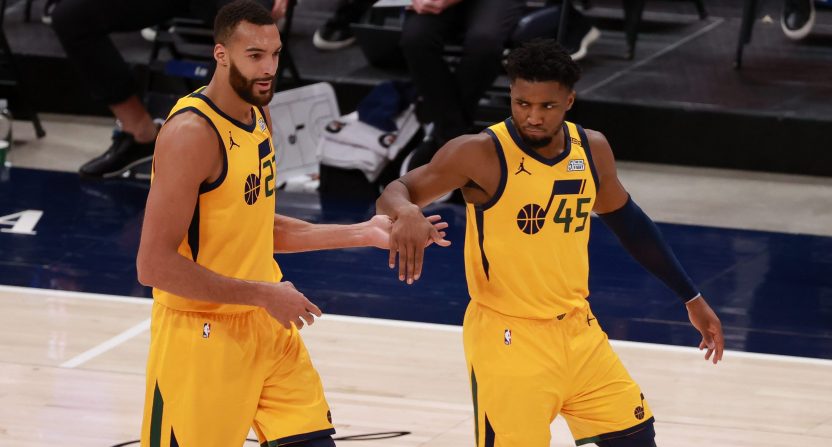 There’s a small class of elite teams atop the NBA. The Utah Jazz, with a record of 15-5 and the fourth-best net rating in the league, have crashed that exclusive party. After a first-round exit in the playoffs last year, they’ve grown into a high-functioning three-point-heavy offense that moves the ball. All five players on the court can dribble and pass, and nearly every rotation player is a legitimate threat from deep. They are a contender in the West.

The blown 3-1 lead in the 2020 playoffs — which wouldn’t have happened had Mike Conley’s Game 7 buzzer-beater rimmed in — made it easy to forget how good of a team the Jazz can be. After a quiet offseason, in which their only notable addition was backup center Derrick Favors, Utah has achieved impressive internal development. The return of Bojan Bogdanovic, who was out in the playoffs, has also been huge.

Nearly half of the Jazz’s shot attempts come from three, leading the league, and they’re making 39 percent of them, which trails only the Clippers and Nets for tops in the NBA. They have a great shot profile, with few midrange attempts (though they could afford to get to the rim more), and they run the fewest post-ups in the league — relying instead on pick-and-rolls with Conley and Donovan Mitchell.

The Jazz’s ball-handling accentuates their dominant shooting. A resurgence from Conley is at the center of it. His assists are up and his shooting has been lights-out. His 55 percent effective field goal percentage is a career-high, up drastically from a down season in his first year in Utah. He’s shooting 40 percent from three and locking down on defense, with his steal rate back up and the best defensive rating on the team (incredibly, just 98.6). Conley might have the most compelling All-Star case of anyone in Utah.

The most difficult part about playing against the Jazz is how easily their offense flows, and how many secondary options they have. With so many shot-creators and shooters, Utah has an easier time beating good defenses. Run players off the line, and they know how to seek out better options. Eventually, they’ll find the right play:

It’s not just that the Jazz have a lot of good shooters; they also have a lot of good passers. In the above clip, everyone makes the right play, from Conley’s well-timed pocket-pass, to Rudy Gobert’s kick-out, to Bogdanovic’s quick swing to Joe Ingles. The Jazz don’t often get into an offensive malaise because of this ability to generate shots. They have plenty of pull-up shooting (Mitchell, Conley, and Jordan Clarkson take and make plenty), but they rarely get bogged down.

This ball movement shows itself in transition, too, even though the Jazz aren’t a particularly fast team:

That’s beautiful basketball. They’ve attained this offensive flow thanks to impeccable spacing and ball-creation. Conley and Ingles leverage lights-out shooting to generate pick-and-rolls on the move, disjointing defenses and seeking out passes. When four guys on the floor can shoot, those passes are easier, and rim runs from Gobert are more effective. Conley and Ingles are both highly effective playmakers:

They sit in the 80th, for Conley, and 95th (for Ingles!) percentiles among the NBA’s ball-handlers, per NBA.com tracking. Mitchell’s lower figure will improve if he finds some of the shooting magic that he had in the playoffs.

Gobert is an undersold part of their offensive flow. Disregarding the nonsensical screen assist debates that have shown up on NBA Twitter, Gobert is one of the most effective screen-setters and rim runners in the game. He has a knack for sensing where a ball-handler wants to go and adjusting his body to create that space.

For example, this early slip gave Clarkson a downhill path to the rim:

Jaxson Hayes’s general cluelessness on defense helped, but Gobert knew he didn’t even have to make contact with Josh Hart here to do his job. Clarkson went right to the rim and finished. Having a center who makes these subtle reads is a source of easy offense, and it’s great for players who run lots of pick-and-rolls and take pull-up threes. Gobert is also a solid passer and big body who racks up dunks. Even as part of a shrinking contingent of dinosaur non-shooting centers, he provides significant value to one of the league’s more modern offenses.

It will be fascinating to watch how the Jazz do in the awards category, because they will likely have a shot in a number of categories. Gobert is one of three or four top favorites for Defensive Player of the Year, and has regained his DPOY form. Clarkson leads the league in bench scoring, and given his uncharacteristic efficiency, he should be squarely in the race for Sixth Man of the Year.

Quin Snyder will have a compelling case for Coach of the Year. He’ll get credit for their free-flowing offense, and anytime a team jumps into the elite tier of the league, the coach will get consideration for COTY. Add in potential All-Star and All-NBA selections and the Jazz could be unusually prevalent in the awards races.

It remains to be seen whether they can stick around with the Los Angeles teams to gain home-court advantage in the playoffs (if that means much anymore). They’ll have to find a better way to deal with Nikola Jokic and the Denver Nuggets — Jokic put up 47 a few nights ago against the Jazz. Mitchell will have to shoot better and average more than 22 points per game in the playoffs.

But the Jazz have the makings of a legitimate contender. Gobert is a great defense unto himself. The offense has the spacing and creation to threaten anyone. Seeking out mismatches — key in the postseason — is easy when you have ball-handling like the Jazz. They might not be as good as the L.A. teams, but no one will want to face Utah in the playoffs.